Camouflage On The Border—It's Who's Wearing It

The story I mentioned below [Migrants race to reach US before Trump takes over, by Yemeli Ortega, AFP, January 18, 2017] has a picture, above of camouflage gear "offered for sale in Sonora state, Mexico, to migrants heading to the United States".

Well, if they have to break into the country wearing camouflage gear, they're not migrants, they're invaders. But it reminded me of how freaked out the MSM and SPLC get by "camo-clad" patriots, especially the Minutemen who volunteered to guard the border when Bush wouldn't. It wasn't hard to find a recent example.

Meet the Borderkeepers of Alabama

A vigilante anti-immigrant group called the Borderkeepers of Alabama is sending teams of men clad in camouflage and equipped with thousands of dollars in military weaponry to patrol for undocumented immigrants in Arizona and New Mexico.

The group, which has been operating since at least 2014, claims as many as eight volunteer “teams” of "redblooded Americans" who, it says, "travel to border towns to work closely with local residents and governmental agencies to limit illegal transient activity." It is one of the latest groups in the nativist extremist movement, which peaked in 2010 and has diminished dramatically since then, to engage in armed citizen border patrols.[More]

Armed citizen patrols are still needed, but my point about the camouflage is that if I said that camouflage-clad Mexicans had been spotted crossing the border (and yes, some of them do have rifles) that would be called "fearmongering" by the SPLC—which we at VDARE.com call the $PLC because its business model is raising huge amounts of money by mongering fear, sometimes fear of us.

Whereas the Alabama Borderkeepers (below) are only wearing camouflage because the kind of clothing you need for armed desert patrols more or less only comes in camouflage. 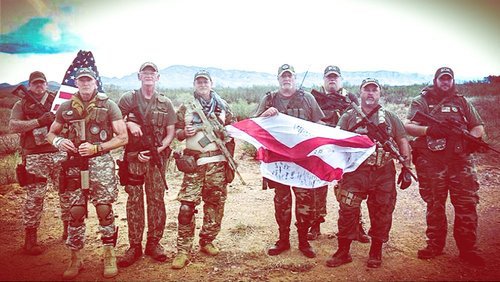 If they dressed like the  Marlboro Man, they'd have twenty fewer pockets. By the way, if you're wondering, that's the official State Flag of Alabama in the middle.