Now more details are coming out about King Barack’s unconstitutional amnesty. And in California at least, that means government IDs/drivers licenses for the masses of illegal aliens.

Below, illegal aliens lined up for their handouts in Los Angeles on Wednesday. 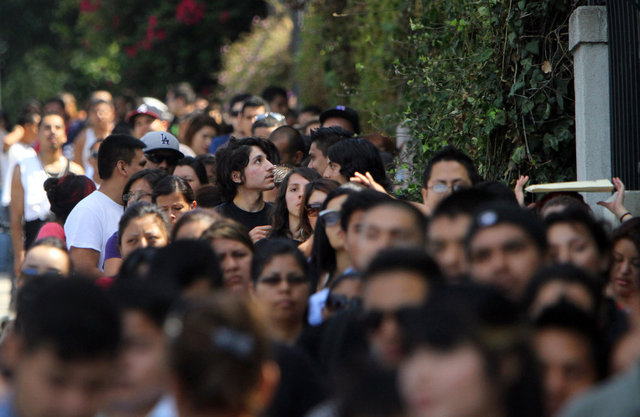 After all, the DREAM moochers need to drive to the jobs they will steal from American citizens — which is particularly bad news in California, where the unemployment rate was 10.7 percent in July, the nation’s third-worst state job-wise.

Besides the job loss to California residents, there is also a national security threat inherent in handing out state identification to anyone can pass for under 50 who shows up. Advertising that California is the go-to place for IDs seems unwise, since broadcasting that fact is a huge magnet for bad guys from jihadists to crack dealers.

California will issue driver’s licenses to hundreds of thousands of young illegal immigrants once the Obama administration grants them work permits, the state Department of Motor Vehicles says.

The state’s decision is the opposite from Arizona’s, where Republican Gov. Jan Brewer on Wednesday afternoon signed an executive order outlawing driver’s licenses for anyone who benefits from the new federal deportation relief.

One legislator said most Californians oppose licensing illegal immigrants and predicted renewed debate over the issue.

The Obama administration left it up to the states to decide if they will issue driver’s licenses to the young people brought to the country illegally as children but now eligible for temporary work permits.

A 1993 California law banning driver’s licenses for illegal immigrants remains in place, but the DMV will treat as “temporary legal residents” anyone who qualifies for the federal deportation relief program, meaning the state ban no longer applies to them, DMV spokesman Mike Marando said Wednesday.

“California law is not changing. California is and remains a ‘legal presence’ state, however those applicants approved by (the Department of Homeland Security) will become temporary legal residents,” Marando said.

That did not sit well with Southern California Assemblyman Tim Donnelly, R-Hesperia.

“I think there’s going to be a huge debate right here in California over that very issue,” said Donnelly, a vocal opponent of illegal immigration. “The vast majority of Californians are adamantly opposed to giving driver’s licenses to illegals.”

The federal government will give qualifying applicants an employment permit and Social Security number that can be used to prove their legal residency at the DMV, Marando said.

Some states already allow illegal immigrants to drive and others have no formal policy, but California is among a majority outlawing licenses to people who cannot prove their legal residency.

A 1993 state law banned the issuance of California driver’s licenses to anyone who couldn’t prove they were “a citizen or legal resident of the United States under federal law.” Signed by Republican Gov. Pete Wilson, the driving ban was a precursor to 1994’s voter-approved Prop. 187, which sought to exclude illegal immigrants from public schools and other services.

Judges overturned most of Prop. 187, but the driver ban has lasted nearly two decades despite some Democratic lawmakers’ perennial attempts to overturn it.

A short-lived repeal of the 1993 license ban was one of the last bills signed by Democratic Gov. Gray Davis before voters recalled him in 2003. Just weeks after he took office, incoming Republican Gov. Arnold Schwarzenegger and the Legislature reverted to the ban.

It should remain in place, said Donnelly, who added that he believed both the Obama administration and California officials were waving “a magic wand” to grant benefits.