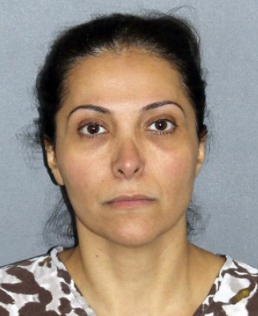 In Orange County, a Saudi woman who lists her occupation as “princess” has been arrested for keeping a slave.

Was Meshael Alayban (pictured) unaware of legal prohibitions against human ownership in the United States? When her countryman Homaidan al-Turki ended up in a Colorado prison for similar behavior, it was quite the news item in The Kingdom. The state Attorney General was summoned to Riyadh and made to spell out why America expects super-precious Saudis to obey infidel law.

JihadWatch explains that the immutable Koran permits human bondage and the practice remains a cultural norm in many places. Sadiq al-Mahdi, former prime minister of Sudan, wrote in 1999 to Mary Robinson, the United Nations High Commissioner for Human Rights, that “the traditional concept of JIHAD does allow slavery as a by-product.”

As one of six wives married to the grandson of the king of Saudi Arabia, the princess is wired. The embassy is putting $1 million toward her $5 million bail. If a trial is forthcoming, it would surely be an instructive demonstration of the expanse of diversity in America.

SANTA ANA, Calif. (AP) — A Saudi princess was charged Wednesday with human trafficking for allegedly holding a domestic worker against her will and forcing her to work at an Orange County condominium, prosecutors said.

Orange County District Attorney Tony Rackauckas identified 42-year-old Meshael Alayban as a Saudi princess who was charged with one count of human trafficking. If convicted, she faces up to 12 years in prison.

Alayban was arrested after a Kenyan woman carrying a suitcase flagged down a bus Tuesday and told a passenger she believed she was a human trafficking victim. The passenger helped her contact police, who searched the Irvine condo where Alayban and her family were staying, authorities said.

The 30-year-old woman told authorities she was hired in Kenya in 2012 and her passport was taken from her on arrival in Saudi Arabia. She was forced to work excessive hours and was paid less than she was promised and not allowed to leave, authorities said.

“This is not a contract dispute,” Rackauckas told the court during a bail hearing Wednesday afternoon, likening the case to slavery. “This is holding someone captive against their will.”

An Orange County judge set bail at $5 million for Alayban and required her to submit to GPS monitoring. He also banned her from leaving the county without prior authorization.

Alayban did not appear in court in Santa Ana. Her attorney, Paul Meyer, said the case was a contractual dispute and argued his client shouldn’t be assigned a ransomlike bail solely because she was rich. He said she had been traveling to the U.S. since she was a child, owned properties here and had given her word she would address the allegations.

“This is a domestic work hours dispute,” he said.

Rackauckas had asked the judge to deny bail for Alayban or set it at $20 million, saying it was unlikely any amount would guarantee a Saudi princess would show up in court. He said the Saudi consulate had already offered to cover $1 million in bail initially set after her arrest.

Police say Alayban’s family traveled to the U.S. in May with the victim and four women from the Philippines.

The victim had signed a two-year contract with an employment agency guaranteeing she would be paid $1,600 a month to work eight hours a day, five days a week. But starting in March 2012, she was forced to cook, clean and do other household chores for 16 hours a day, seven days a week, and was paid only $220, prosecutors said.

Prosecutors say the victim’s passport was taken from her, and she wasn’t allowed to return to Kenya. In May, she was brought to the U.S. and given her passport only to pass through customs, the district attorney’s office said.

Once here, she was forced to tend to at least eight people in four apartments in the same Irvine complex, washing dishes, cooking, cleaning, doing laundry and ironing, the office said.

The other four women left the home voluntarily with police once authorities arrived. They told police they were interested in being free, said Irvine police chief David Maggard Jr.

No charges have been filed in connection with their circumstances.

Police said there are no indications of physical abuse.

It is the first forced labor case brought in Orange County under a human trafficking ballot initiative passed last year by California voters, and it is being investigated by local police and federal immigration authorities.

Claude Arnold, special agent in charge of Immigration and Customs Enforcement’s homeland security investigations in Los Angeles, said he hoped the case would encourage other trafficking victims to trust in law enforcement.

Alayban is set to be arraigned in court Thursday. She is one of the wives of Saudi Prince Abdulrahman bin Nasser bin Abdulaziz al Saud, the district attorney’s office said.