In California, the April unemployment rate was 10.9 percent and 4200 jobs were lost. Only Nevada and Rhode Island had worse jobless rates (11.7% and 11.2%, respectively).

Even so, some big name businesses are touting their foreign-language-speaking clerks — so diversity-friendly! No companies admit to passing over American English speakers to hire, but you have to assume that is happening. “Bilingual” preference means home-grown Americans are screened out. The few available jobs are for those who fit into the newly created multicultural society, where English speakers are at a disadvantage. 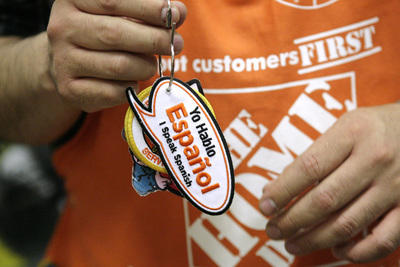 Government is terrible in coddling immigrants by requiring “bilingual” ballots and medical translators, etc. so the newbies have far less need to learn English than earlier generations. But business is just as bad in thwarting traditional language assimilation, which is still desired by citizens.

In a hypercompetitive retail environment, more national stores and some local chains are emphasizing that many of their employees are bilingual and can help customers whose first language is not English.

“A lot of retailers are very much focused on providing a diverse workforce for diverse customers that are coming into their stores. They recognize that a lot of people that come into their stores don’t always speak the language,” said Jackie Fernandez, retail partner with Deloitte’s Los Angeles practice.

Such efforts, which also include signs and advertising in non-English languages, are more prominent in states like California that have diverse populations compared with other parts of the country, she said. More than one-third of California’s population is of Hispanic or Latino origin, according to 2010 census figures. An additional 13 percent are Asian. Statewide, 43 percent of residents speak a language other than English in the home, compared with 20 percent nationally.

“We are constantly interviewing and hiring for store positions. In that process, we stay alert to the importance of providing language interpretation for our customers. Being bilingual makes an applicant a stronger candidate,” Safeway spokeswoman Teena Massingill said in an email. “It is important to be able to communicate with our customers in a language that is most comfortable for them. It is a part of how we do business.”

Recently, Lovie Cajilig walked into a Home Depot looking for an electrical part. But instead of asking the sales clerk in English where she could find the item, Cajilig asked her questions and got them answered in Tagalog.

“It’s easier. They can help you better,” the Daly City resident said of why she likes to get help in her native language. Rona Correa, a Tagalog-speaking clerk, helped her.

“It’s easier for them to look for it and it’s easier for us to find the item,” said Correa, who wore a badge on her orange Home Depot apron that said “I speak Tagalog” in both English and Tagalog, a language spoken in the Philippines.

Charlie Rodriguez is another bilingual employee who works at the Home Depot store in Daly City. Spanish-speaking shoppers appreciate that he speaks their language.

“It makes their shopping experience a little easier, ” he said. “Especially in a hardware store, with all the electrical and different departments.”

Three years ago, Home Depot began placing language boards at store entrances with the photos and names of their bilingual employees and showing what languages they speak.

“We make an effort in our stores because customer service is a huge priority for us and we want to mirror the communities that we serve. So it’s a concentrated effort in terms of recruitment,” said Alejandra Barron, senior manager for multicultural marketing at Atlanta-based Home Depot.

“It was less of an initiative and more of a reflection of where we live. Our staff is as diverse as the Bay Area,” Alicia Owsley, the company’s marketing director, said in an email.

“The effort we make to speak in (a customer’s) native language makes things a little more comfortable,” said Kris Van Eeghen-Stoddard, director of training at Airport Home Appliance and whose family owns the business.

Weekends — especially Saturdays — tend to be the time when there is the greatest demand for bilingual sales people, she said.

Benny Kong, who works in Airport Home Appliance’s Hayward store, said he often gets requests to help out customers who want to talk in Mandarin or Cantonese when they are shopping. Being able to speak in the same language helps him address specific questions they may have about an appliance such as a stove.

“I can explain things in more detail to them based on the way they like to cook,” he said. “Some of the features they may not need when it comes to choosing their appliances.”

At Airport Home Appliance, sales personnel are on commission, so there is no premium paid for speaking a different language. But being able to speak a language other than English can give a sales clerk a selling advantage, Owsley pointed out.

Home Depot declined to say whether its bilingual employees received a pay premium.