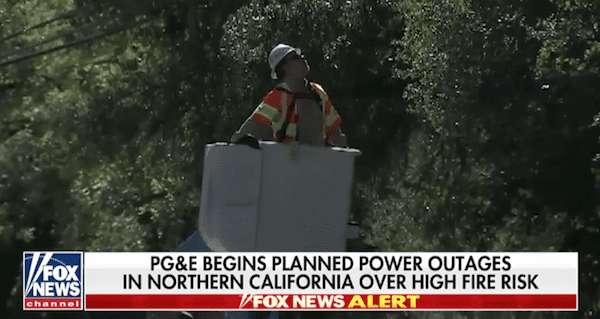 Here in northern California on Wednesday morning, Pacific Gas and Electric (PG&E) has turned off power to hundreds of thousands of customers because of weather forecasts showing wildfire-producing high winds. Its spokes-minions have been appearing on media, portraying the company as sympathetic to rate-payers and concerned about their safety.

Plus, the power outage could last several days so PG&E can check its infrastructure or something. Of course it’s very disruptive to normal life.

My electricity is obviously still on, but it could be shut down whenever PG&E decides. I’ve been filling containers with water since that necessity also needs power to be delivered. 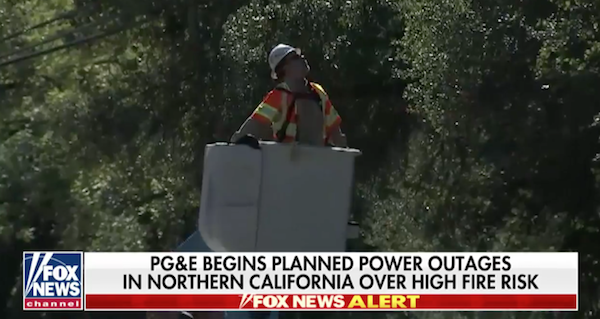 This is the new reality for California after last year’s wildfires caused by downed power lines and electrical equipment forced the state’s largest utility into bankruptcy. Now the pro-active response is to cut power when the forecast calls for high wind. Right now, 200,000 around San Francisco are without electricity. The next phase begins around noon near San Jose; a third shutdown anticipated later today in southern California. In all, half the state’s counties will be affected.

La Jeunesse did mention bankruptcy, but not the dollar cost for the company, which was enormous. Here’s a report from a few weeks ago:

Utility giant PG&E has agreed to a second large settlement over devastating Northern California wildfires, saying it will pay $11 billion to resolve most insurance claims from the wine country fires in 2017 and massive Camp Fire in 2018.

“These claims are based on payments made by insurance companies to individuals and businesses with insurance coverage for wildfire damages” in those catastrophic blazes, PG&E said in announcing the deal.

The settlement will require the approval of a bankruptcy court, as PG&E filed for bankruptcy in January and recently entered into a Chapter 11 reorganization plan.

While the $11 billion sum is large, it’s far smaller than the roughly $20 billion that the insurance companies had initially wanted, after paying out billions to California wildfire victims. (Continues)

So is it suspicious to think the power shutdowns are all about PG&E protecting its bottom line rather than concern for public safety? Probably not.