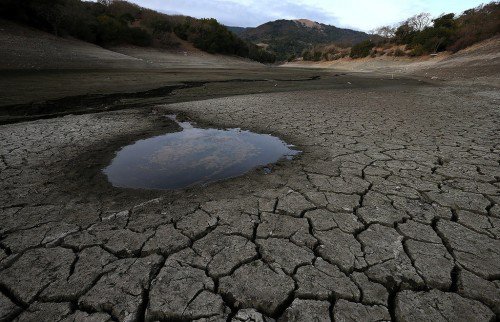 The Golden Brown State’s fourth year of drought has brought massive land sinkage, aka subsidence, caused by continued and deeper drilling of ground water by farmers. The subsidence has been observed for a while, but it is getting worse as more water is pumped out of the ground.

Not only is the subsidence another warning about the limited water supply, but the land sinkage also disturbs the proper functioning of water infrastructure around the state. For example, canals were designed with a precise degree of slope to move water by gravity, and the subsidence has disrupted that.

Around 80 percent of state water use goes for agriculture. Nevertheless, when drought comes, citizen users are exhorted to cut back severely. Responsible Californians have heard the message: in August, cities reduced their water use by nearly 27 percent, slightly better than Gov. Jerry Brown’s mandate in April of a 25 percent cutback.

California is an environmentally overpopulated state at 38.8 million, a sustainability problem exacerbated by unrestricted illegal immigration which has added millions of uninvited residents. Gov. Brown believes himself to be a model environmentalist, but when he visited Mexico (population 120 million) in August 2014, he invited all of them to come to California. The big picture is that the road map of elites to create easy economic expansion via immigration-fueled population growth is not quite the trouble-free path they imagine. California is once again the bad example of the many problems caused by excessive immigration, Nature bats last, as they say.

We Californians are hopeful, however, because of the El Nino conditions which promise a rainy winter.

The bad news is that big rains could also cause flooding because of the subsidence and its damage to water control infrastructure like the delta levees in the central part of the state. The levees near Sacramento have long been identified as dangerously weak anyway, but the land sinkage has worsened their stability.

(AP caption) This July 23, 2015, photo provided by the California Department of Water Resources shows the Russell Avenue bridge over the Delta Mendota Canal in Firebaugh. The drought has caused the bridge to subside until there’s almost no space between the bottom of the bridge decking and the canal water surface. A NASA scientist says in a report released Wednesday, Aug. 19, 2015, that parts of California’s Central Valley are sinking faster than ever as groundwater is being pumped during the state’s historic drought. 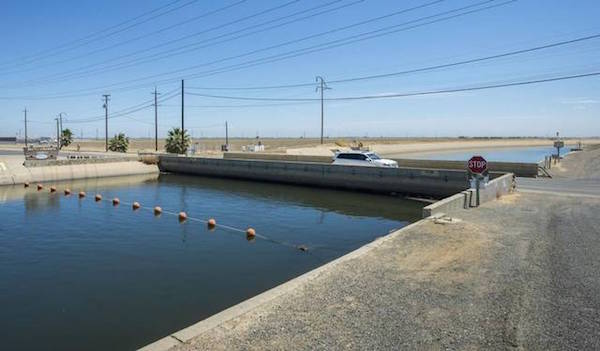 The PBS Newshour had a report on the California subsidence problem on Wednesday:

As drought-desperate California sinks, the risk of flood is rising, PBS Newshour, October 7, 2015

HARI SREENIVASAN: California’s drought is resulting in a big drop. The state is sinking, and sinking fast. Some parts of the state are settling lower at a rate of two inches a month, according to a report NASA released last month.

As Nathan Halverson from Reveal shows us, the sinking is increasing the flood risk in one area of the state that is desperate for water.

This story was produced by member station KQED in San Francisco.

MAN: Let’s fire it up. It’s better than nothing.

JOHNNY ANDREWS, Farmer: My grandpa came out of Texas, and he told me years ago, he said, you know, whiskey is for drinking. Water is for fighting.

NATHAN HALVERSON: Andrews is one of thousands of farmers in the state struggling to keep their crops green during a record drought.

NATHAN HALVERSON: He is turning to what he calls a last resort: drilling for groundwater.

NATHAN HALVERSON: Farmers like Andrews use about 80 percent of the state’s developed water, growing everything from tomatoes to almonds. With the drought in its fourth year, farmers are drilling deeper and deeper, running pumps day and night.

NATHAN HALVERSON: These are just running all the time and burning diesel?

NATHAN HALVERSON: All that pumping has consequences. As the groundwater gets drawn up, the land sinks down. Scientists call it subsidence.

The land around me, literally the dirt underneath my tires, is sinking, more than a foot per year in some areas.

No one knows exactly how much water is being pumped, but hydrologist Michelle Sneed is alarmed by how quickly the ground is sinking.

MICHELLE SNEED, United States Geological Survey: I have been studying land subsidence throughout the West for 20 years, and I have never measured rates like this before.

NATHAN HALVERSON: Over the past two decades, the ground in one area has sunk from Sneed’s head to her feet. According to NASA, some parts of the Central Valley are now sinking more than two inches a month.

NATHAN HALVERSON: That’s an area the size of Rhode Island, and it has sunk permanently.

How do you stop those areas from sinking?

MICHELLE SNEED: Well, the scientific solution is really easy. You stop lowering groundwater levels. Putting that into practice is a whole ‘nother ball of wax.

NATHAN HALVERSON: Farmers would have to cut back on drilling for water.

CLAUDIA FAUNT, United States Geological Survey: The center of it is down south of here.

NATHAN HALVERSON: Sneed’s colleague Claudia Faunt took me to see some of the damage subsidence has already caused.

What have we got going on here? I mean, it’s really buckling.

CLAUDIA FAUNT: Yes. And a few years ago, when I was here, it wasn’t nearly this bent. So, it’s showing evidence of continuing to warp even more.

NATHAN HALVERSON: These canals deliver water to farms and cities throughout Southern California, including Los Angeles.

And this isn’t the only one I see. I mean, I see it here, I see it right down there, and I see a third one.

CLAUDIA FAUNT: Yes. There’s another one up that direction as well.

NATHAN HALVERSON: So, this can be happening to the bridges, to the roadways, to the railroads.

CLAUDIA FAUNT: Correct. In fact, there’s a bridge right down the road from here that the water level is now coming up over the base of the road because that area has sunk.

NATHAN HALVERSON: When I went to see the bridge, the flood risk was clear.

The water level has risen up so high now, that it would go right over the surface of the road, if they hadn’t built these retaining walls to keep it back.

Problems like these are already costing taxpayers tens of millions of dollars. And subsidence is also damaging a vital part of California’s flood control system.

CHRIS WHITE, Central California Irrigation District: So, the levees through here are about five to six feet lower than they were historically.

CHRIS WHITE: This area, we have always had flood challenges through here. But with this subsidence that’s occurred, it’s going to be even more challenging to deal with floods in the future.

NATHAN HALVERSON: Forecasters are predicting a record El Nino this winter. The wet weather pattern could bring heavy rains to this region.

CHRIS WHITE: Red on this map is bad.

NATHAN HALVERSON: White showed me areas most at risk of flooding.

CHRIS WHITE: There’s a school. There’s an elementary school there. Highway 152 crosses right through the area. There is significant farmland assets. I’m praying for rain regardless, but it’s a high-risk situation from a flood control standpoint.

NATHAN HALVERSON: Nearly half the nation’s fruits, vegetables and nuts are produced in California. To find out what the state is doing to protect its vital farmland, I met with Jeanine Jones of the governor’s Drought Task Force.

JEANINE JONES, California Department of Water Resources: Subsidence is not regulated historically under California law. No one is responsible for it.

NATHAN HALVERSON: The state doesn’t even know how big the subsidence problem is.

We’re not even monitoring all of the subsidence?

JEANINE JONES: There has — no, there has not been funding or programs, because there has been no statutory responsibility or requirement to do so.

NATHAN HALVERSON: Last year, California lawmakers passed legislation to manage groundwater, but it won’t require regulators to limit pumping for another 25 years. Until then, the sinking will likely continue.

So, how much is the state projecting this subsidence is going to cost taxpayers?

JEANINE JONES: We have not run that analysis. It is a local scale issue, so — and most local agencies — because subsidence happens very slowly, and over the long term, it is not something that comes to the top of the priority list generally in terms of maintenance.

NATHAN HALVERSON: The independent nonprofit California Water Foundation has estimated that damage due to subsidence across the state could cost taxpayers billions of dollars to fix.

Do you think a billion dollars is a high estimate for what the total costs will be or a low estimate?

JEANINE JONES: I really don’t have anything to judge it by. Just don’t have the data.

NATHAN HALVERSON: For some farmers, drilling for water has provided a lifeline during the drought. But the long-term consequences of that drilling are becoming clearer. As large swathes of the state continue to sink, the risk of flooding increases.

And people like Johnny Andrews, whose farms have survived four dry years, are now worried they could be wiped out by the rain the state desperately needs.

JOHNNY ANDREWS: We’re talking about the state and feeding the people in the state. If that flood is bad enough, it will wipe out the next year’s farming, or a lot of it.