At 38 million residents, California is overpopulated from a water supply standpoint. Any normal reduction of rainfall for several years is now a source of concern that rationing is likely to follow. The state has had two years of sub-normal rain which puts a strain on water supply for drinkers, farmers and fishermen. Plus, long droughts are a fact of life in the region, shown by the two megadroughts starting 1100 years ago, each lasting more than a century.

Below, northern California’s Lake Shasta at 31 percent capacity a few years back. 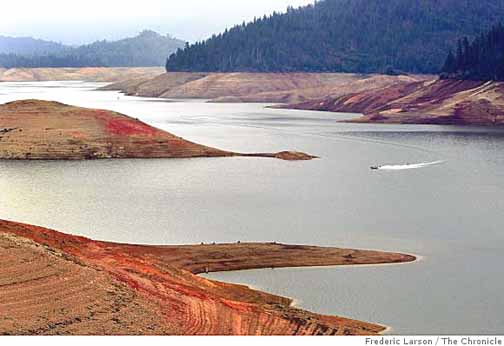 California is nothing like the paradise it once was, under the burdens of diversity and overcrowding. Worse, there will be a whole lot more of both if the Senate amnesty sluts get their way and triple legal immigration.

Since California is attractive to immigrants and illegal aliens, we can assume many of the newbies will settle in the state. A recent PPIC factsheet estimated that one in four foreign-born persons in the United States resides in California; it would be reasonable to think that a similar proportion of new immigrants would do likewise. Yes, the state economy stinks, but pre-existing relatives there and liberal policies are still magnets.

Assuming 30 million new immigrants in the next decade (rather than today’s 10 million, 1 M annually), a quarter of that would be 7.5 million more water-using residents ending up in Crowdifornia. Given the region’s natural history, Washington’s crazy-growth immigration policy is environmentally unsustainable and guarantees worsened water supply problems in the future.

SACRAMENTO, Calif. (KCRA) —Record dry and warm weather across California has put the state in a severe drought, according to the National Weather Service.

Earlier this week the California State Water Resources Board issued a “Notice of Surface Water Shortage for 2013.”

The document warned that some water rights holders may see their diversion cut off by late summer and fall.

The dire warning comes after California saw its driest winter in nearly 90 years.

The dry weather marks the second year in a row the state saw below-average precipitation.

Reservoirs across the state are at 80 percent of average for the time of year.

The State Water Resources Control Board warned that the lowest priority water rights holders may face restrictions by the end of the summer.

Some water rights holders in the Sacramento River watershed are already facing restrictions because flows in the river are from stored water and not natural sources.

The water board issued the notice to warn farmers of possible shortages as they begin planning what and how many winter crops they will plant.

Along with the notice, an attached two-page document offered water conservation tips for growers including recycling irrigation water, minimizing the length of planted rows, and using sprinkler systems when winds are calm.