California Gangsters Get Tattoo Removal to Blend In

The San Francisco Chronicle reports cheerfully that there is an increase of diverse gang-bangers having their identifying tattoos removed so they can work in regular jobs without being noticed. Naturally the taxpayers are dinged for the cost of an imagined social benefit, when in fact gang tattoos are a helpful danger sign for citizens to beware. Tattoo removal decreases public safety.

Dim do-gooders readily accept the idea that vicious Mexican gangsters have turned over a new leaf. Such things are theoretically possible, one imagines, but hard-core gang behavior imprints strongly. The initiation rituals and gang rules are designed to ensure that nobody leaves the gangster lifestyle ever.

A Sureno guy featured in the article now works moving furniture — Santa Rosa residents should watch out. (Your humble correspondent always has a firearm handy for home deliveries.)

Below, the tattoos of a Sureno who presents himself as now reformed. 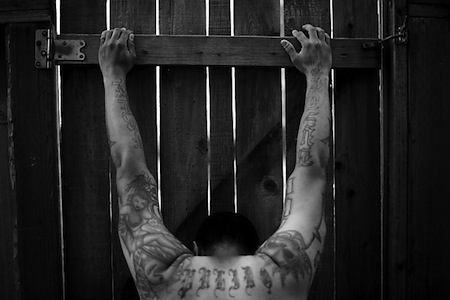 The black tattoo that once wrapped Cris Pulido’s throat now looks like a smear of grease.

One year ago it was the Mayan symbol for the number 13, which in gang-speak signifies the 13th letter of the alphabet, M. M is code for Mexican Mafia, which is another code for Sureño, which is what Cris Pulido used to be.

“I remember the excitement I saw in other people’s eyes when they looked at it,” Pulido said. “It was like they were thinking, ‘Man, that’s so cool,’ ” when in reality, they were probably thinking the opposite.”

Pulido lives in Santa Rosa and is one of the thousands of former California gang members who have entered tattoo removal programs that cities began offering about 15 years ago. The programs are seeing a steady increase in the number of participants, officials say.

That may not suggest a decline in gang membership, they say, but it does offer hope that a once-unthinkable action for hardened gang members – erasing the marks of allegiance and loyalty – is becoming more acceptable.

It’s also sending a message to younger gangsters that the lifestyle does not have to be permanent.

Signups double
Toni Abraham, program manager for employment services at Social Advocates for Youth in Sonoma County, said 65 people have entered the county’s tattoo removal program this year, up from about 30 who signed up in 2010.

Although conditions are different for each participant, most are eligible for the program after completing 25 hours of community service and paying a $50 fee.

“People who are thinking about changing their lives, this can be one of their first steps,” Abraham said. “Kids in juvenile hall are hearing it in lockup: The first thing to do when they get out is get their tattoos removed.”

Irwin Tenorio, 20, got his first tattoos – an old English S and R on the backs of his upper arms – at age 12. The work was done by an elder Sureño who ran a tattoo parlor out of his apartment.

Mother’s surprise
Tenorio, who is also from Santa Rosa, hid the tattoos from his parents by constantly wearing sweatshirts. One morning when he was 15, however, he was wearing a tank top as he ironed his Dickies pants to a sharp crease when his mother walked into his room.

“She didn’t want to believe what she saw,” Tenorio said. “She thought they were drawn on by Sharpies.”

“I felt like when I got them I got love from my friends,” Tenorio said. “I’d become a role model to them. But the fundamental truth was that was all a lie.”

Tenorio was in Sonoma County Jail in 2009 on a drug charge when he had his epiphany. With a daughter recently born, he told jailers he wanted to be moved into the cell block reserved for “dropouts” who wanted out of their gang.

“Why would you die for a street?” Tenorio asked, rubbing a hand over his faded “2800 Block” tattoo that once signified his alliance with a street crew. “Your parents didn’t move here so you could die for a street.”

Dealing with pain
During the tattoo removal visits, Tenorio focuses on his past to withstand the pain. The laser removal process pulls the skin to extract the ink, leaving the skin raised and angry. Most patients undergo 25-minute sessions and spread appointments over three to four months.

“I have to think about it real deep,” Tenorio said of his past. “I imagine it as it’s going away from me. That way, it feels good.”

He’s getting the “2800 Block” tattoos from the inside of his wrists removed first, followed by the S and R. It will take another year at least, Tenorio said, but he’s leaving one tattoo – his daughter’s name along the side of his forearm.

New job
Tenorio was recently hired by Social Advocates for Youth to do maintenance work, landscape and tend a sunflower garden.

“I think those guys who I wanted love and respect from back then – they wouldn’t give me love back,” Tenorio said. “But I think in the back of their minds, somewhere, if they saw what I was doing now they’d feel happy for me.”

Pulido hopes his throat tattoo will be invisible within a year.

The blackened Aztec symbol that once looked like a large = sign was topped by three 8-ball-sized circles. Each bar represented 5, and each dot counted for 1, to add up to 13.

“I started marking my body because I thought, ‘This is what I’m about. This is what I’m going to do with my life,’ ” Pulido said. “I could not have imagined another life at that time, even if I wanted to.”

More tattoos filled out his body: the bullet-riddled north stars on his elbows that taunted his then-enemies, the Norteños. The words “Buster Free” written down the front of his forearms also slurred the Norteños.

A change in jail
In September 2009, Pulido was arrested for selling four ounces of cocaine to an undercover cop in Oakland. While serving a year in Santa Rita Jail, his cellmate asked him questions about God and the Bible, and even though Pulido rejected the queries at first, he said the questions “began to soften my heart.”

Since his release in September 2010, Pulido has taken a variety of jobs as a laborer, found mostly through parishioners at his church. He has a steady gig moving furniture.

A few weeks ago he attended a family birthday party, where he crossed paths with active Sureños, the young men who once stood in awe of his loyalty and envied his tattoos.

The faded marks on Pulido’s forearms and throat revealed his change of heart.

He said the young men eyed him but said nothing.

“There are some young guys who’ll look at me and think, ‘He’s weak-minded, he’s a traitor,’ ” Pulido said. “But I don’t think about that. I’m not in that frame of mind. … I just keep thinking, ‘They’ll be off my body soon, and once they are, they’ll be off my mind.’ “