Just when you think California has maxed out on all the possible bad anti-Trump craziness, there’s this: Sacramento has decided to expand its education program about the WWII Japanese internment to connect it with current issues like President Trump’s rejection of hostile Muslims as immigrants. Apparently, the big liberal brains equate the unlawful incarceration of thousands of American citizens in WWII with the right of a nation to not admit historic enemies for immigration.

It’s another example of lefties regarding immigration as a right, not a privilege granted by the receiving country.

Below, Japanese-Americans board a bus in Salinas for an internment camp in 1942. 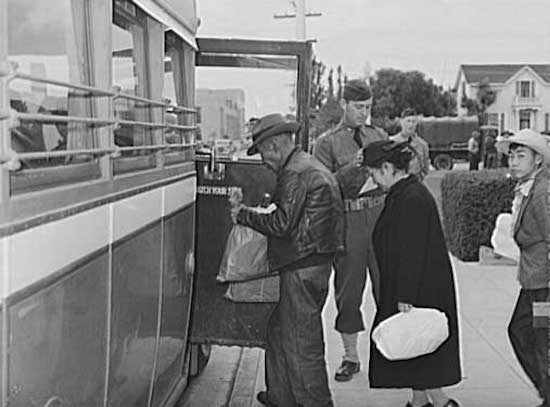 The films, plays and public broadcasts California now funds to enlighten students and the public about the horrors of Japanese American internment camps in World War II will soon be expanded to illuminate more recent examples of persecution — including the Muslim immigrants targeted by President Trump.

The legislation signed this week by Gov. Jerry Brown is just one example of actions by California’s Democratic lawmakers and policymakers to distance themselves from Trump. Some are mostly symbolic, like resolutions calling for congressional investigation and censure of the president, while others chart an independent course for the state in protecting undocumented immigrants and combatting climate change.

AB491, which takes effect in January, provides $3 million over the next three years for educational projects that link the mass lockup of Japanese Americans to ongoing “civil liberties injustices” against racial, religious or sexual minorities or immigrants.

The bill itself declares that Trump’s actions “highlight the ongoing need for public educational activities so that no group or community is ever again unjustly targeted as Japanese Americans were during World War II.”