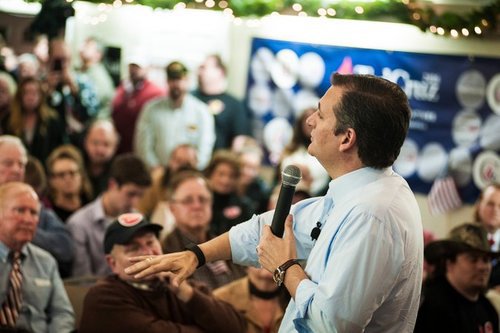 GOP Candidates Battle Over Who Is Immigration Restrictioniest

I’ve been saying for a long, long time that immigration policy is a very big deal for the future of my country. The GOP presidential candidates are now finally figuring that out. From the NYT:

A long-simmering debate over immigration in the Republican presidential contest boiled over on Thursday, as Senator Ted Cruz accused his colleague, Senator Marco Rubio, of “trying to jam this amnesty down the American people’s throats.”

From appearances on conservative talk radio to the campaign trail in South Carolina and New Hampshire, five Republican candidates jumped on the issue as they sought to appeal to grass-roots conservatives alarmed about immigration. And the eruption of open warfare between Mr. Rubio and Mr. Cruz, two candidates representing different wings of the party, showed the likely contours of the Republican presidential fight as it hurtles toward the Iowa caucuses in less than 90 days.

Immigration is a key vulnerability for Mr. Rubio, who was initially part of an effort in 2013 to formulate a bipartisan bill in the Senate to overhaul the immigration system. His subsequent moves to distance himself from his role in fashioning the bill have left some conservatives distrustful of his candidacy.

Mr. Cruz, in an appearance with the conservative radio host Laura Ingraham, denounced Mr. Rubio without using his name and by using a biblical allusion, saying: “You know where someone is based on their actions. As the Scripture says, you shall know them based on their fruits.”

The flare-up came as three other lower-polling candidates — Senator Rand Paul of Kentucky; Rick Santorum, a former Pennsylvania senator; and Carly Fiorina, a former chief executive of Hewlett-Packard — joined the fight, piling on Mr. Rubio or Mr. Cruz as insufficiently pure on a key litmus test for segments of the Republican base.

The long-distance skirmishing illustrated the degree to which several candidates see immigration, which emerged as a key issue in the 2014 midterm elections, as the most potent weapon in their arsenal in a presidential contest that has been characterized by concerns about the direction of the country.

Yet, because of his work on the 2013 immigration reform effort, Mr. Rubio is more familiar with the nuances of the immigration debate than some of his rivals. When asked about Mr. Cruz’s critique while campaigning Thursday in South Carolina, Mr. Rubio sought to turn the tables, highlighting the Texas senator’s support of allowing more visas to bring foreign professionals with college degrees and specialized skills into the country.

“He supported a massive expansion of the H-1B program, a 500 percent increase,” he said. “So, if you look at it, I don’t think our positions are dramatically different. I do believe that we have to deal with immigration reform in a serious way, and it begins by proving to people that illegal immigration is under control.”

It’s sad that Rubio isn’t smarter, richer, and more independent-minded. As the Likable Latino, he would have been ideal to lead the charge toward immigration sanity.

But instead in 2013 he signed up to lead what the Republican Brain Trust and its billionaire backers was telling him was a sure thing — Chuck Schumer’s amnesty bill — even though it was obviously nuts, both as policy and as politics.