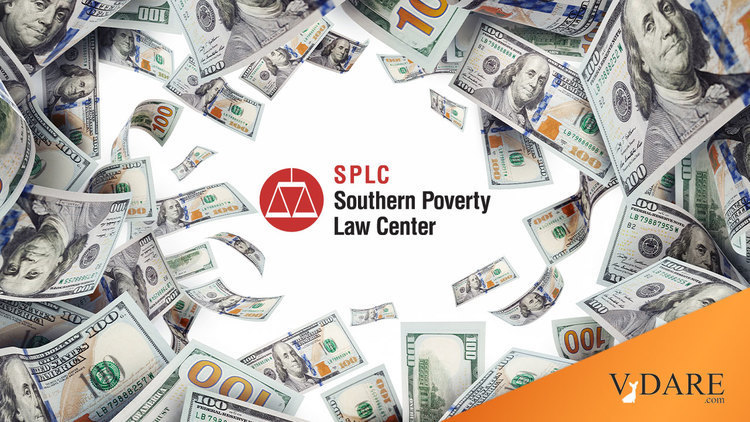 I'm on record as a generally opposing the crush of lawsuits that clog our society today, from baseless personal injury suits to lawsuits by illegal aliens (see "Illegals Invoking the Law" article on VDARE.com)

to the countless claims of racial discrimination that typically amount to nothing more than white-guilt extortion.

But when Bill Keller (the pastor, not the NYT editor) threatens to sue the SPLC, I get excited.

Stop the Hate Against Haterz!

The SPLC needs no backgrounding here, though for those interested, the Social Contract performed a heroic service when it ran an issue-long indictment of the group a few years back.

First Amendment lawyers have a term for lawsuits over political speech: Strategic Lawsuits Against Public Participation, or SLAPPs for short.

The SPLC is unlike your typical "SLAPP"-style victim: they themselves file lawsuits with abandon that have precious little to do with compensating parties and far more to do with censoring unpopular ideas and promoting their anti-white, left-wing agenda. The rancher suit is a good example.[Border Vigilante Ordered to Pay Damages in SPLC-sponsored Suit, By Susy Buchanan, splcenter.org, 11/27/2006]

They're loaded. They're revered by the media and treated by law enforcement as, well, fellow law enforcement. They list Jared Taylor and Sam Francis with tattoo-covered neo-Nazis.

They have real power to get people fired—I think of Kevin Lamb, the harrowing account of his ordeal. How striking fear of unemployment in people fosters productive debate on issues of race and immigration is beyond me.

And with shootings like the one at the Family Research Council (which the SPLC has listed for years), the picture is getting more complicated than Wade Michael Page vs. the pure lambs of the left.

In short, they're SLAPPers who need to get slapped.

I'm sure they'll get help—the finest lawyers in America will trip over themselves to help defend the case, probably pro bono. Ted Olson and David Boies will rush right over.

Legally, Keller and his group/website, LivePrayer.com, would not have trouble with some of the standard elements of defamation, depending of the state of suit: no question the listing as a "hate group" is a published statement about Keller. I also see very little difficulty demonstrating that being listed as a "hate group" is defamatory, i.e., tends to lower one's estimation in the eyes of the public. Damages? Again, I'm sure a lawyer can find something—a drop-off in donations, for instance, or bad press that has to be countered.

Actual malice (meaning, did they know it was false or were they reckless about falsity)? Yes, I think one could make the case that the SPLC acted with reckless disregard for truth, given that their entire stance is about, well, "defamation".

Bill Keller Ministries is listed under "general hate" in Florida, right after the "Aryan Terror Brigade".

"General hate", according to Mark Potok and Friends, is "not easily categorized" because "these groups espouse a variety of rather unique hateful doctrines and beliefs." They might want to bother themselves to be more specific, because if you're going to target a person or group for annihilation by putting them on the "hate map", you don't help yourself with the "recklessness" element of actual malice by announcing that "these freakos are just haters, OK? Trust us."

Question is, is being labeled a "hate group" a false statement? Keller here probably has an easier time of it than a race realist tagged with "racist"—that term, while distortingly ugly, might just be seen by the law as flatly describing a person who believes in inherent group racial differences. Sigh.

Keller, by contrast, could credibly show he doesn't "hate" gays, he simply sees their ways as un-Biblical and sinful. He wants them to come to Jesus, and what's "hateful" about that?