The head of the UK Independence Party, Nigel Farage, recently visited the United States for a few days and got a fair amount of attention from the conservative media.

He spoke about the failure of “four decades of state-sponsored multiculturalism” in Britain when he appeared with Fox’s Neal Cavuto on Wednesday:

Farage sensibly recommended that ISIS fighters from Britain not be allowed to return to the country, a suggestion that PM David Cameron picked up, though Obama hasn’t.

NIGEL FARAGE: We’ve seen an increased radicalization within the United Kingdom, much of this I’m afraid to say is a self-inflicted wound. We’ve had four decades of state-sponsored multiculturalism. We’ve actually encouraged people not to come together and be British but to live separately, to live apart.

NEIL CAVUTO: Kind of like what we are doing here.

FARAGE: Yes, there are similarities. We even have the last Archbishop of Canterbury suggesting that Sharia law be acceptable in British cities. So, I’m afraid we have been weak and we have not been muscular in standing up and saying to people, ‘We are a Christian country. We have a Christian constitution, a Judeo-Christian culture. We’ve allowed our schools to be infiltrated. Our prisons, you know, are now perhaps where jihadism is on the march more rapidly than anywhere else. Much of this we’ve done to ourselves.

Below, Britain-residing Muslims protested the return of UK troops from Afghanistan in 2010. 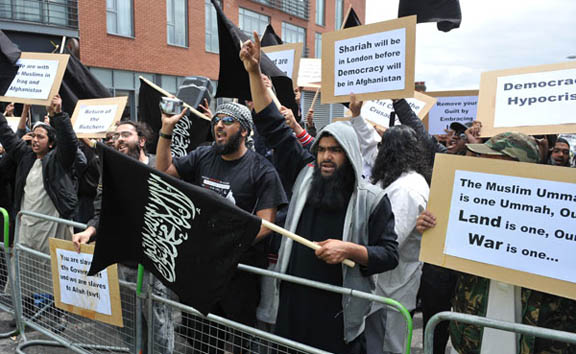 For another interview with Nigel Farage, check out Laura Ingraham’s talk with him, where the subject of immigration was included: “Controlling immigration is a logical, sensible thing to do,” Farage remarked.