Britain’s Farage: ‘Immigration Is the Number One Issue’ for the Public

Across the pond, UKIP leader Nigel Farage has been pounding British mainstream parties with their failure to stop the excessive immigration that has been plaguing the island with hostile Muslims and job-grabbing Eastern Europeans.

Farage has been refreshingly fearless in telling the unpleasant truths about immigration, particularly that multiculturalism has been a failure and a moratorium needs to be enacted to get a grip on the chaos. He is plain-spoken, remarking last year, “Four million net migrants in the last 13 years to Britain represents an astonishing social change, and one that people simply don’t want.”

On Tuesday, Farage held an outdoor presser near the iconic cliffs of Dover to unveil a new billboard design for the upcoming election, shown below: 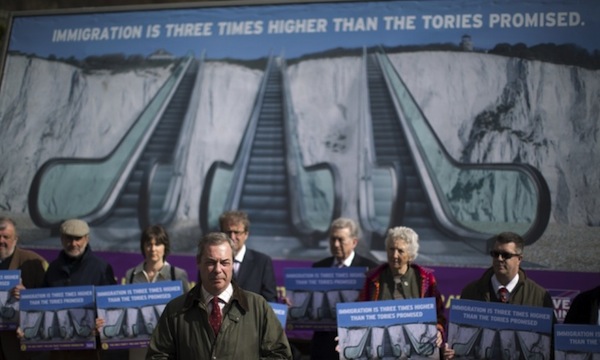 The BBC was there to film the event:

FARAGE: This subject of immigration goes right to the heart of the public’s disillusion with politicians. It is all about trust. Now five years ago David Cameron said, in his contract with Britain in his manifesto, that he would reduce immigration into Britain to 1990s levels, i.e. back to tens of thousands a year, not hundreds of thousands a year. . . When Cameron made that promise, he was being willfully dishonest, because he knew the truth, now the British public five years on know the truth, that you actually cannot have an immigration policy, you can’t set targets of any kind at all, you can’t attempt to control who comes into Britain all the while you’re members of the European Union.

Who but Nigel Farage would say without apology that immigration has fundamentally changed the social fabric and culture of the nation, and not for the better?

What a shame we don’t have a political leader like that in America.

Nigel Farage declared immigration has left towns and cities in Britain almost unrecognisable for many people over the last decade, as he unveiled the UK Independence party’s (Ukip) first general election poster, an image of the white cliffs of Dover with three escalators running up them.

The Ukip leader said he was making immigration the central plank of his campaign and wants the the chance to grill David Cameron on the issue at the leaders’ television debates later this week.

Standing in front of his new billboard in a pub car park in St Margaret’s Bay, near Dover, Farage moved beyond making a case that immigration puts pressure on wages, schools and hospitals to a more emotional argument that it is changing the culture of the UK.

He said immigration was the number one issue for the electorate in “all the opinion polls”, although some surveys put the NHS first among the concerns of voters.

The poster is a modification of a previous advert showing a single escalator leading up the white cliffs. It bears the slogan: “Immigration is three times higher than the Tories promised.”

Farage said immigration was having an impact on A&E services, GP appointments and primary school places. But he went on to say it was also causing a “change in our communities that has left many people in our towns and cities frankly finding it difficult to recognise the place being the same as it was 10 to 15 years ago.”

He said: “Yes, we are making immigration the central part of our general election campaign linked in to our membership of the European Union.”

Challenged about the economic benefits of migration and its contribution to the economy, Farage said: “Even if somebody argues overall our GDP has grown, there is more to this country and the makeup of communities and our way of life frankly than just GDP figures.”

Asked if he could name any places changed culturally by immigration, Farage said: “Well, we haven’t got time but if we went to virtually every town up eastern England and spoke to people about how they felt their town or city had changed in the last 10 to 15 years there is a deep level of discomfort because when you have immigration at this sort of level then integration doesn’t happen.”

The Ukip leader also gave a new figure – about 30,000 – for how many migrants he would like to see coming to the UK each year. The party previously promised to cap numbers at 50,000 before Farage abandoned the target and said he would like to see it return to normality, or a range of 15,000 to 50,000.

He also emphasised the party’s policy of requiring migrants to have health insurance for the first five years and refusing entry to those with life-threatening diseases.

“There was a hell of a storm over the Aids thing six to nine months ago but at the moment you can come to Britain from anywhere in the world and be tested and get the drugs for Aids. Those drugs are about £25,000 per year, per person. A vast majority of British people don’t want that expenditure … We all want to be good neighbours and friendly with the people in our street but generally we put the interests of our family first,” he said.

Charlie Elphicke, the Conservative candidate for Dover and Deal, said: “All we’ve seen from Ukip on immigration is chaos and confusion: one minute there’s a cap, then there’s not. Mark Reckless says certain migrants should be repatriated, then Farage says they’re welcome to stay.”

Farage is juggling the demands of fighting a national campaign with trying to win his own target seat of nearby South Thanet in Kent. He has said he will stand down as leader if he fails to take the constituency.

The party is only expected to win a handful of seats but the level of its support could be crucial in deciding the outcome in marginals. It appears to be slipping slightly from around 14% since the beginning of the year but Ukip will be hoping to gain from Farage’s exposure in the leaders’ debate and party political broadcasts.