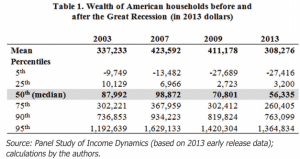 From a new report by the liberal Russell Sage Foundation based on crunching government data, we see that the net worth of the median household in 2013 was $56k, down sharply from $88k in 2003, which was before the silliest part of the Housing Bubble. Thus, the median household’s net worth is down 36% from the economically meh year of 2003. You might almost suspect that America’s elites don’t have the average American’s interests foremost in mind.

Fortunately, we’ve got all these unaccompanied Central American adolescents and pregnant women clamoring to get in, which, according to 90% of the respectable political rhetoric I’ve heard in this century, will no doubt do much to fix things.

See, it’s simple arithmetic. If the government lets in extremely poor people equal in number to 25% of the population, that will push households at the 50th percentile up to the 75th percentile, thus making their net worth increase from $56,335 to $260,405. You don’t believe me? What are you some kind of innumerate who doesn’t understand math? There are trillion dollar bills lying on the sidewalk!