On Saturday, quite a few friends of American sovereignty showed up in ultra-blue Boston (!) for a rally to save the country from the alien influx. What a pleasant surprise. 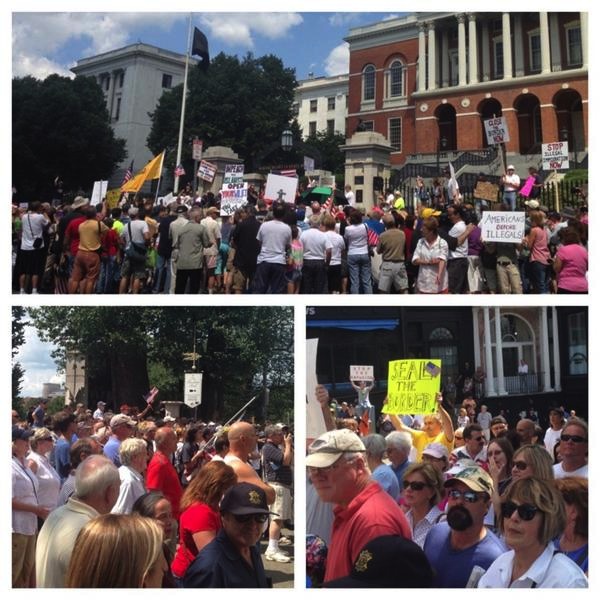 Apparently the protest was organized by Jeff Kuhner, a local radio guy (and legal immigrant from Canada). His page on WRKO-AM radio invited listeners to a Stop the Invasion Rally. where participants could Join Jeff Kuhner for a major rally to protest Governor Deval Patricks plan to house illegal aliens from Central America in Massachusetts.

Heres a clip of Kuhner:

A local news report thought the participants were angry. Well, good. We are.

An anti-illegal immigration rally on Beacon Hill outside the State House on Saturday, July 26 was teeming with protesters.

While Bree Sison of CBS Boston estimated that the gathering drew hundreds of people, Jeff Kuhner, the host of WRKO’s The Kuhner Report, who organized the rally, put the number closer to 10,000 people.

People carrying signs that said “Deport illegals,” and “Americans before illegals” stood just outside the State House from 11 a.m. to 1 p.m.

Kuhner told Boston.com that he himself is a legal immigrant.

Kuhner came to the United States in the 1990s on a work visa as he worked towards a Ph. D. Still a Canadian citizen, he was issued a green card in 2006. Kuhner said he is currently in the process of becoming a naturalized citizen.

“I’ve never seen any kind of a backlash like this before on any issue ever. People in this state are livid. They feel betrayed by the political elite,” Kuhner said of Gov. Deval Patrick’s decision for Massachusetts to offer shelter to unaccompanied minors.

This week, a state official said it remained “unclear” how many unaccompanied minors crossing the nation’s southern border illegally would be coming to Massachusetts and how many could stay in the state longer. The state has offered to house up to 1,000 children at one of two secure facilities for up to four months.

Kuhner told Boston.com that he thought Saturday’s rally in Boston may well become a national story. “We made the Drudge Report.”