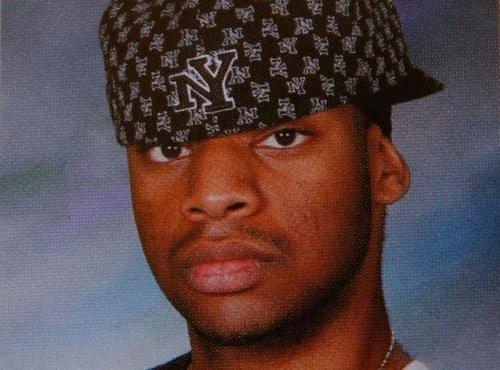 When you read on Slate a story that says  Boston Man Killed Holding Knife Was Planning Beheading, Officials Say,[By Ben Mathis-Lilley, June 3, 2015] inquiring minds want to know "What kind of Boston Man was it?"

Was it a white Irish guy from Southie with a scally cap? No, they're either sticking up banks or raising money for the IRA. How about a Back Bay WASP aristocrat? No, they're running the CIA, and sometimes the country.(Yes, I am a professional stereotyper. )

Well, I've given the answer away by putting an image of Usaama Rahim's 2007 yearbook photo at the top of this post. You can see he is kind of wearing a scally cap, but backwards. His nephew is David Wright, also arrested by police as a co-conspirator to plot to behead police. Mr. Wright (below) is apparently so large physically that regular handcuffs won't work on him. 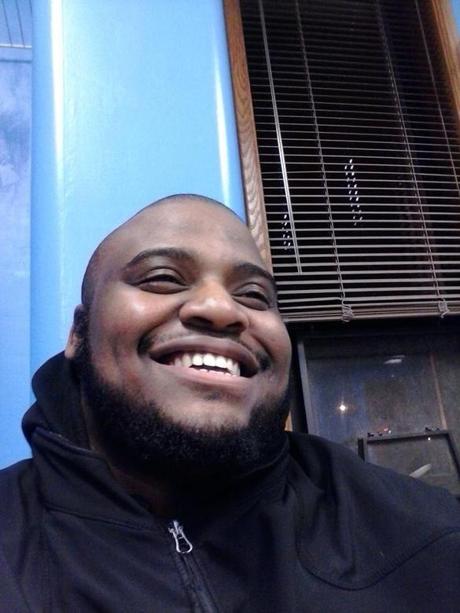 That makes the answer to our question "What kind of Boston Man" is that Rahim is a regular American black who for religious reasons has a funny name. That makes this a potential "black lives matter" shooting—see below.

Here's a picture Slate did publish. 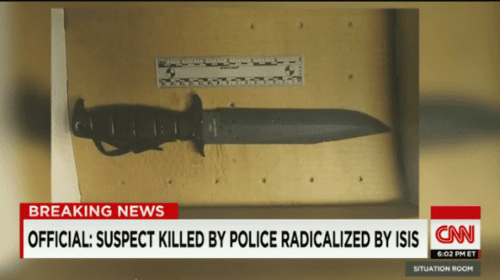 That's the knife Usaama Rahim was holding when he was shot. I recognized it—it's made by the Ontario Knife Company in New York State, and is probably their SP6 model.

A Boston Globe story tells us that Rahim had also bought one of their Marine Raider Bowies, an even more fearsome weapon:

If you are a law enforcement officer and you hear that the terrorist plotter you are going to arrest is not armed with a gun, but only with a knife, you may feel justified in relaxing, slightly. If you hear that he is armed with an Ontario Knife Company Marine Raider Bowie, you should unrelax and say "Uh-oh."

We're talking about a knife that you might actually be able to behead someone with, and with which you could definitely kill someone, gruesomely.  A knife that will take someone's hand off at the wrist, ad can be used to chop down a small tree.

Sometimes when the police are threatened by a maniac with a knife, and kill the maniac in self-defense, you get people saying that it was only a small knife, and a small maniac, and the police should have thrown a blanket over them or something. This is not one of those cases.

However, rumors that Rahim had been shot in the back led to a meeting between  the police and "religious and community leaders." This is the black community, of course. 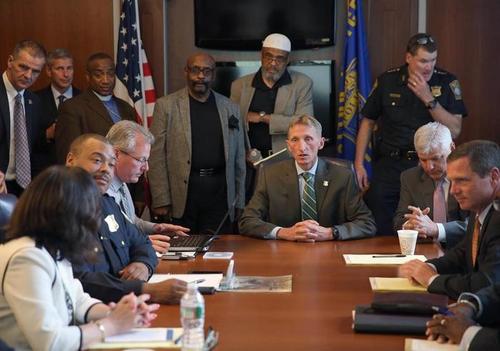 Usaama Rahim had been plotting for days, officials said. He bought three long-bladed fighting knives — “good for carving,” he said — and confided to his nephew and another man that he would travel to another state to commit a beheading.

But at 5 a.m. Tuesday, the plan abruptly changed, according to a federal affidavit. Rahim would murder police officers in Massachusetts.

“I’m just going to, ah, go after them, those boys in blue,” Rahim allegedly told his nephew David Wright, in a phone call recorded by an anti-terrorism task force.

Two hours later, when members of that task force approached him in a Roslindale parking lot, Rahim allegedly brandished one of his military knives. They told him to drop his weapon. “You drop yours,” he allegedly replied, before a Boston Police officer and an FBI agent shot him to death. [More]

So let's ask the following question: is this a Muslim plot, egged on by foreign Muslims, or a black plot, egged on in the wake of Trayvon, Ferguson, Eric Garner, Freddie Gray, et cetera, by the American media and the President of the United States?

The answer is that  as long as the President is Barack Hussein Obama, there's no practical difference.