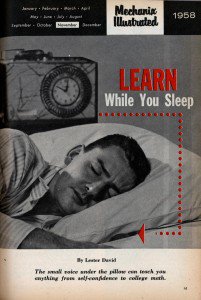 Sleep Learning or Hypnopaedia was a regular feature of 20th Century sci-fi books, such as Brave New World and many Heinlein stories. In the Future, you wouldn’t have to study, you’d just listen to lectures while you slept.

Unfortunately, Sleep Learning doesn’t actually make you smarter or better informed. But 21st Century researchers are looking into it as an exciting way to make you dumber and more ignorant. The New York Times breathlessly reports on Sleep Unlearning as a valuable tool in society’s massive effort to make individuals more oblivious:

Race and Gender Biases Can be Reduced With Sleep Therapy, Study Finds MAY 28, 2015

It may be possible to reduce biases regarding race and gender while a person sleeps, according to a new study published in the journal Science.

Research had shown that biases could be reduced with a technique called counterstereotype training. … Study participants were shown images “that are opposite to what they might have been exposed to when growing up,” said Ken A. Paller, one of the study’s authors.

These included images of women and African-American men.

The researchers must not have been exposed to much TV when growing up.

When participants were shown images of women alongside scientific words, and African-American men alongside pleasant words, they were asked to press a button labeled “Correct.” A sound followed.

Afterward, the participants were invited to take a 90-minute nap, and the sounds were played back to them.

“We thought it might remind them of the training,” Dr. Paller said.

Indeed, after the nap, the participants who heard the sounds while sleeping showed a reduction in bias, Dr. Paller and his colleagues found, which persisted for at least a week.

A version of this article appears in print on June 2, 2015, on page D2 of the New York edition with the headline: Anthropology: Study Suggests Sleeping One’s Way Past Bias.