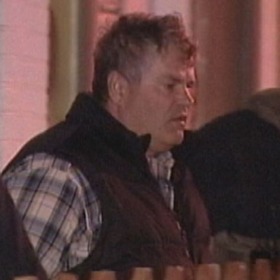 America! Is there anywhere else on earth that’s half as welcoming?? This country’s openness to outsiders is remarkable and draws a diverse assortment of newbies in search of a better life.

The welcome mat also invites criminals of all sorts who use America’s sloppy attention to IDs to establish new identities away from prying eyes of police in the homelands.

Some war criminals who relocated to the US come to mind: Salvadoran death squad soldier Gonzalo Guevara Cerritos, Ethiopian torturer Kelbessa Negewo and Bosnian executioner Marko Boskic — monsters one and all.

The latest addition to America’s war criminal rogues’ gallery is Bosnian Sulejman Mujagic, accused of murder and torture while an Army commander during the ethnic war in the former Yugoslavia. He was arrested in Utica, where 6500 Bosnians reside in one of the largest Bosno-settlements in the US.

ALBANY, N.Y. — A fugitive accused of killing one prisoner and torturing another after a 1995 battle in his native Bosnia has been arrested in upstate New York, federal authorities said Wednesday.

U.S. Immigration and Customs Enforcement officials said Sulejman Mujagic, 50, of Utica now faces extradition at the request of authorities in Bosnia-Herzegovina, where he is charged with unlawful killing of the enemy and unlawful wounding and torture of a prisoner of war while commanding a platoon in the Army of the Autonomous Province of Western Bosnia.

Mujagic was fighting for a region that had seceded from the central government during the Bosnian war and attacked the prisoners from the Army of Bosnia-Herzegovina after a battle on March 6, 1995, according to court documents.

Mujagic was arrested without incident at his home above a variety store he owns about 6 a.m. Wednesday. He was being held at a detention facility in Cayuga County pending a detention hearing on Monday.

Utica is home to more than 4,500 Bosnians, one of the largest concentrations in the U.S.

The court documents said a surviving prisoner after the 1995 battle and other soldiers on the scene told investigators that Mujagic and some of his men began kicking prisoners and beating them with rifle stocks and demanding information.

The documents said Mujagic turned at one point on Ekrem Baltic, demanding the name of his commander. After Baltic said he didn’t know, Mujagic fired a fatal burst from his AK-47 into Baltic’s chest, according to the charges.

Then he told Nisvet Cordic he would also be killed if he didn’t identify the commander. After his men beat Cordic to the ground, he was ordered to stand up and Mujagic opened fire at the ground near his feet when he said he didn’t know the name. One of the bullets hit Cordic in the leg, again knocking him to the ground, and Mujagic kicked Cordic’s wound, according to the charges.

Mujagic and his men allegedly continued to beat Cordic and ordered him to crawl up a hill toward the lines of a Serbian unit allied with Mujagic’s. More shots were fired at Cordic, wounding him in the thigh and back. It wasn’t initially clear how Cordic survived the attack.

A law enforcement official familiar with the arrest said federal authorities received a tip in early 2008 that Mujagic was living in Utica, in central New York about 75 miles west of the capital Albany, since 1997. ICE’s Homeland Security Investigations worked with the U.S. Marshals and local police to track him down. The official asked to speak on condition of anonymity because it is an ongoing investigation.

The 1992-95 Bosnian war was the most brutal of the wars that erupted after Yugoslavia fell apart. The fighting between Bosnian Muslims, Serbs and Croats devastated Bosnia and killed over 100,000 people.