How bad is the American economy?

It’s so bad that even the famously fertile immigrants are having fewer babies. It’s normal for the birth rate to decrease during a long period of economic contraction, so the downward trend in births is an indicator that uncertainty about the future has caused many, both citizens and immigrants, to scale back family production.

Below is a graph of a couple important points, particularly the fact that even though the foreign-born comprise 13 percent of the US population, 23 percent of all births are to foreign mothers. 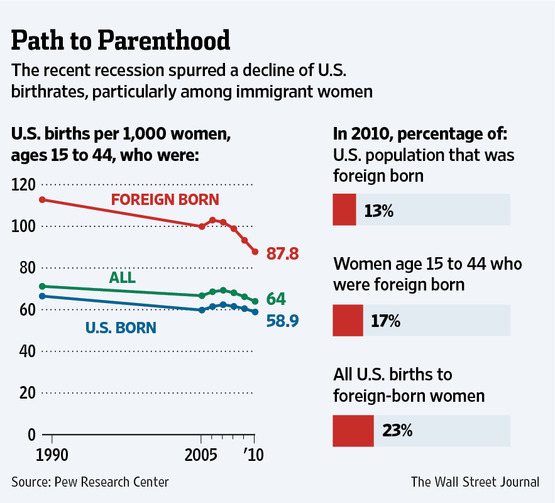 A steep decline in births among immigrant women hard hit by the recent recession is the driving force behind the record low U.S. birthrate, according to the Pew Research Center.

Immigrant women, both legal and illegal, still have a higher birthrate than the U.S. population as a whole. Yet the rate for foreign-born women dropped 14% between 2007 and 2010, to 87.8 births per 1,000 women ages 15 to 44, compared with a 6% decline for U.S.-born women, to 58.9 births. The birthrate plunged 19% for immigrants of Hispanic origin during that period; among Mexicans, the largest group among Hispanics, the rate plunged 23%.

“Latinos have been hit particularly hard by the recession, and the downturn in births is especially sharp for immigrants,” said D’Vera Cohn, co-author of the Pew study, which is based on analysis of data from the Census Bureau and the National Center for Health Statistics.

In addition to economic conditions, the U.S. birthrate has been affected by a slowdown in new arrivals. Immigration from Mexico, the biggest source country, reached a net zero in 2010, with as many Mexicans returning to Mexico as entering the U.S., according to Pew.

Preliminary data from the National Center for Health Statistics show the overall birthrate in 2011 was 63.2 per 1,000. However, there is no breakdown yet available on immigrants and U.S.-born mothers. Pew researchers say the pattern observed through 2010 is unlikely to have changed.

The U.S. birthrate has declined during major economic crises in the past, including the Great Depression in the 1930s and the oil shock of the 1970s. Birthrates, which have reliable records dating back to 1920, have historically bounced back after economic conditions improved.

Over the long term, nations tend to see their birthrates decline as they become more prosperous, a trend that can threaten that prosperity. When low fertility is coupled with low mortality, the result is an aging society with a high proportion of elderly people and relatively fewer workers to support them, a situation that Japan and many European countries face. Overall U.S. fertility has remained around the replacement level, owing to the large number of immigrants it attracts.

The total fertility rate in 2012 is estimated at 1.39 children per woman in Japan and 1.40 in Italy, compared with 2.06 in the U.S., according to the Central Intelligence Agency, which compiles world data.

Immigration has propelled demographic changes in the U.S. for several decades, so any sustained decline in birthrates among immigrants could affect the pace of growth of the minority population. The U.S. population is poised to reach “majority-minority” status, when less than half of the population is white, around 2040, demographers say.

The year 2007 marked a record number of births in the U.S.—4,316,233. But there have been fewer births since the onset of the recession, even as the overall population continues to grow because of immigration. From 2007 to 2010, the number of births fell by more than 300,000, with immigrant women accounting for more than 40% of that decline, according to the Pew report.

The decline in birthrates among immigrants has narrowed the gap between them and native-born Americans in the past two decades. In 1990, the birthrate for immigrants was 70% higher than for U.S.-born women. In 2010, it was only 49% higher.

“Immigrants have shaped [population] patterns recently by driving down births, and in the long term by offsetting declines in births to women born in the U.S.,” said Ms. Cohn of Pew.

Carmen Ozorio, a 41-year-old Guatemalan immigrant, has had only one child since immigrating to the U.S. more than a decade ago. The Los Angeles housekeeper thought she would have another child, but then her partner’s work hours at a factory were cut as the economy soured. “The situation is too difficult to have more children,” said Ms. Ozorio, whose son is 9.

More factors than immediate economic conditions influence childbearing decisions in the long run, including women’s employment, access to contraception and age of marriage. In Mexico, home to the majority of U.S. immigrants, the fertility rate has been steadily declining.