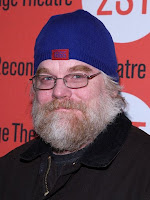 Instead of having Brad Pitt play Billy Beane in Moneyball, I'd have Philip Seymour Hoffman play, uh, Jim Williams in Ballmoney, the tragic story of bearded, pudgy former boilerroom attendant at a canned bean factory who, through immense work, has slowly revolutionized how the smartest fans think about his beloved game. But then, after decades of labor as the ultimate outsider, his statistics start to show that something is going very wrong with the sport. Should he tell the world about the spreading corruption? Or should he keep his mouth shut and not ruin his chances to finally become an insider in the game that has been his life?

For what shall it profit a man, if he shall gain the whole world, and lose his own soul?