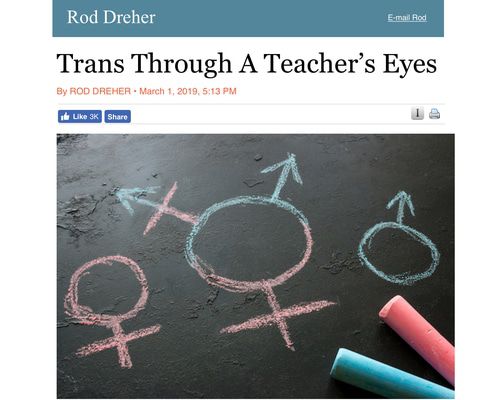 Trans As A Fashionable Manifestation Of Mental Illness

A teacher who reads this blog comments:

I would be sued and lose my job for what I’m about to reveal here, if my identity were known.

I am a teacher at a very socially liberal arts school in a major American city. I have seen the entire gay marriage fight play out over the decades, from cultural fringe to Supreme Court victory. I have also been watching the transgender revolution in recent years, and it terrifies me. The gay kids and the gay rights kids were generally the same as their peers–maybe more politically extreme, but their lives were usually stable. Not the trans kids, though. They’re in desperately bad shape.

Kids started to come out as trans in significant numbers about four years ago, around the time of Obergefell. At my school, being gay had long since lost any stigma, and has even passed the stage of dignified rebellion, to becoming a boring commonplace. At such an artsy school, everyone always knew that a big portion of the student body was gay.

… When each year begins, I ask students to fill out an information card so I can get to know them. One of these two answered “What’s something interesting about you?” with “I’m trans!” and the question “What do I need to know about you to help you succeed?” was answered with “I’m super mentally ill.” Like the girl the year before (also a female-to-male trans), this kid ended up being pulled out of our school for her serious mental health needs….

Throughout the year, his mother and school counselor have kept us updated on the side effects of new medications the child is “trying,” plus the drama of switching doctors when treatments backfire (for some reason!). Just this week we were told that he is being withdrawn from school (again, surprise!) to continue school at home, for medical reasons.

Here’s the scariest part: this young man’s mom is an evangelical pastor. He was gay in middle school, then trans, and is now a doped up basket case so dysfunctional that he has to be removed from an incredibly tolerant, liberal school where he was literally celebrated for being a “she.” NONE of these kids have been bullied in any way–many students cheer on what they’re doing. …

The elephant in the room that nobody wants to talk about is that, over and over for years now, these trans children are clearly suffering from massive mental and emotional problems, and all their pronouns and transitioning do nothing to heal that. Their fellow students, indoctrinated by this kind of ideology for their whole lives, uncritically foster it. The few adults–like me–who would like to point out that the emperor has no clothes, are prohibited by fiat from doing so. (For example, the trans student with the pastor mom has a 504 plan–a kind of mild special education accommodation–that requires teachers to use the preferred pronoun in class. These documents are legally binding on teachers.)

I haven’t seen any kind of fad that’s this profoundly damaging in my entire 20 year career. Nothing else comes close to being so clearly and needlessly tragic. As with hate crime hoaxes, I’ve started wondering how many more cases of broken youth we’ll all have to turn a blind eye from before we can look away no more, and finally stare truth in the face.

Mental illness is probably fairly common across time and space, but how it manifests itself seems to be culture-dependent. Imagining you are Napoleon, for example, used to be a thing, apparently. Now it’s not. Being a serial killer in the 1970s-80s was a thing, while being a school shooter was only just getting started.

On the other hand, maybe the recent trans craziness isn’t just a random cycle, maybe the underlying mental health problems really are on the upswing.

Here’s my rough line of thought:

Transgenderism, especially in high IQ men, tends to be related to autism/Asperger’s. It’s much more common among tech company software engineers, sci-fi fans, libertarians, etc. than elsewhere among the population. It’s much rarer among, say, left of center verbalist intellectuals (i.e., the kind of guys who approve of it the most in principle). NPR announcers with gentle indoor voices seldom announce they are transitioning.

Next question: Is autism/Asperger’s increasing?

I don’t know. One problem is that “autistic” has come to mean what used to be called “retarded.” Partly this is due to the big decline in numbers of Down’s syndrome people, who tend to be friendly people persons and could hardly be called autistic.

We are supposed to believe that autism spectrum problems aren’t increasing, we just increased awareness. That’s quite possible.

But what if autism really is growing, whether due to some unknown infection or infections or other medical issues, or perhaps life is more abstract and conducive to spectrum thinking?

that they are all one underlying thing, subclinical autism, manifested in superficially different forms according to environment and life history; and that late-onset male trangenderism belongs to this group as male HPD [histrionic personality disorder]. The late onset is a change of manifestation as hormone levels or other sex-related physiology change in middle age.