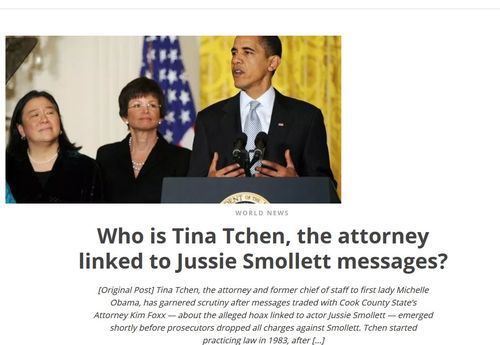 How did hate crime huckster Jussie Smollett get away with it? All crooked roads in Chicago lead back to the Obamas.

… And that brings us to the Democratic operatives behind the scenes. Two weeks ago, Chicago Sun-Times reporters discovered that Obama crony pal and deep-pocketed campaign finance mega-bundler Tina Tchen had inserted herself in the investigation. Tchen texted Cook County State’s Attorney Kim Foxx just three days after the incident “on behalf of Jussie Smollett and family who I know” to express “concerns.” She suggested that Foxx lean on Chicago Police Superintendent Eddie Johnson to yield to the FBI and she shared an unidentified Smollett’s family member’s cellphone number with Foxx.

Tchen, who is approximately a 5’2″” East Asian woman, somehow qualifies as an Honorary Large-and-in-Charge Black Sister. Ever since January 21, 2017, Tchen has been getting all the jobs that you might think would go to a black woman, such as chairing the Grammy Awards task force to determine why Beyonce has only won 22 Grammys, and now she’s running the Southern Poverty Law Center’s self-investigation of whether or not Morris Dees said “I like chocolate” to one of the SPLC’s rare black women attorneys.

I’m reminded of the disgraced ex-Obama Administration official who launched the Twitter hashtag #OscarsSoWhite in 2015 and has ridden it to a pleasant career traveling from one entertainment industry confab to another to be paid to demand more of what Tom Wolfe called Plaques for Blacks. But she is at least black, while Tchen is not. Here is Tchen with Valerie Jarrett: And, wow, you can totally see how Roseanne Barr’s Ambien-addled brain did not register that the Iran-born Jarrett, who appears to have had some work done and who now looks about as realistic as Kim Hunter as Zira in Planet of the Apes, is from the Talented Tenth, which got Roseanne immediately fired by the black lady who was briefly in charge of ABC, tanking the #1 show on TV. Jarrett looks like the median Beverly Hills matron, so no wonder Roseanne figured she was some kind of Israel-hating Iranian rather than one of America’s most sacred minority with the most Diversity Pokemon Points.

Foxx texted back that she had done as requested and that Chief Johnson was “going to make the ask.” The unidentified relative rejoiced: “OMG this would be a huge victory.”

Only after Foxx meddled did she recuse herself and name an underling to take over — which rendered her Kabuki recusal meaningless to veteran observers of the “Crook” County criminal justice system. So, who was the Smollett relative with all the right (or rather, left) connections? Follow the trail:

–Tchen and Smollett’s sister, Jurnee Smollett-Bell, joined together in March 2018 at South by Southwest in Austin to proclaim that “There Is No Time’s Up Without Women Of Color.” 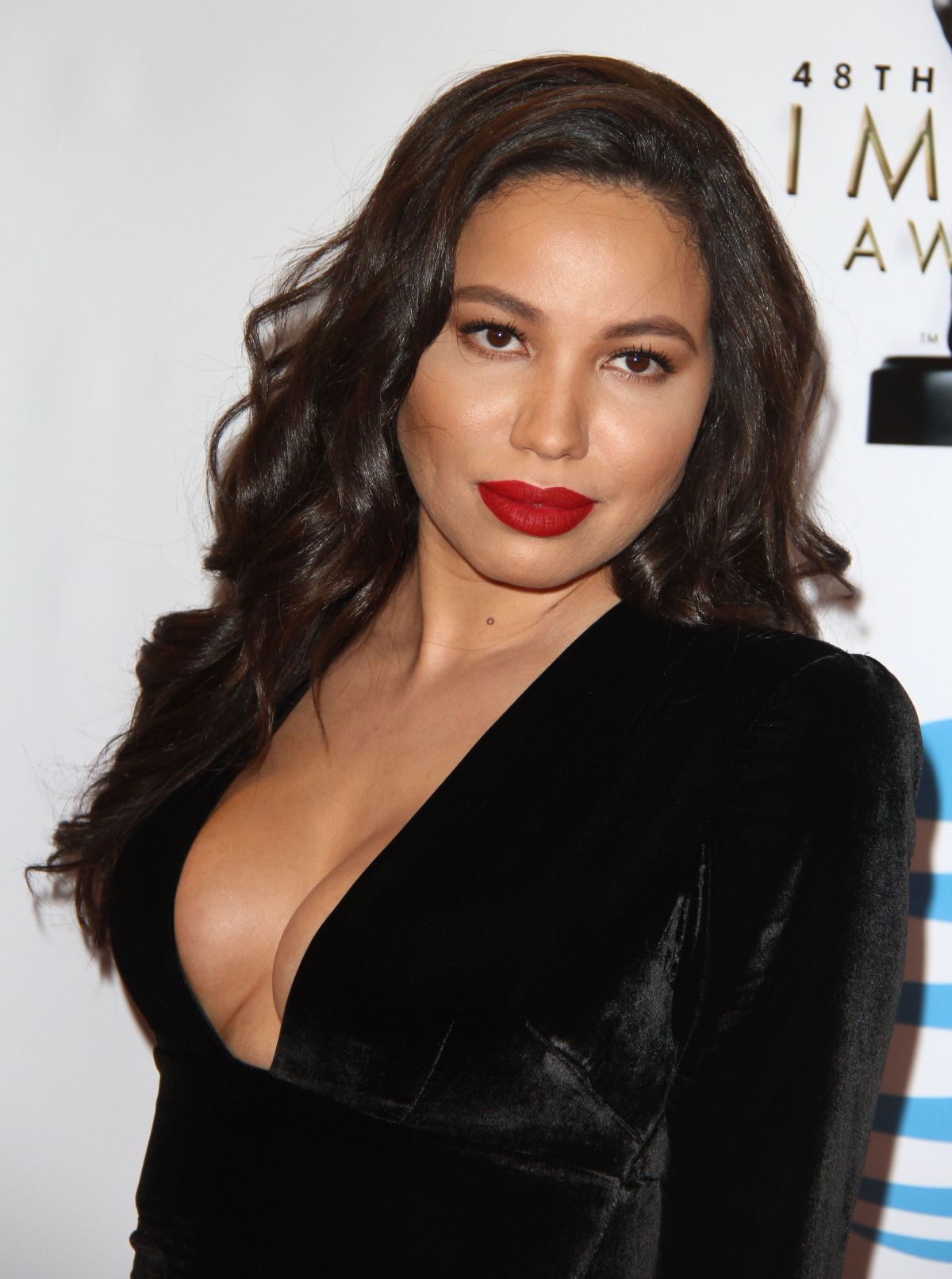 Time’s Up is an effort to cash in on Weinsteingate, of which Tchen heads the legal defense fund.

And that’s a good excuse for a picture of Jurnee Smollett.

Interestingly, just as Jussie’s story was unraveling in mid-February, the new head of Tchen’s Time’s Up racket, former WNBA leader Lisa Borders, a black woman, had to resign due to family issues. From USA Today:

LOS ANGELES – Lisa Borders says she has resigned as president and CEO of Time’s Up, the gender equality initiative formed last year in response to sexual misconduct allegations in Hollywood.

Borders says in statement Monday that she is stepping aside “with deep regret” due to family issues. She didn’t elaborate….

The organization was formed in January 2018 in response to sexual misconduct allegations leveled against powerful men in the entertainment industry including Harvey Weinstein and Kevin Spacey.

To be precise, the Women of Hollywood did not exactly organize due to Kevin Spacey’s depredations. A friend with Show Biz roots whose ancestors had to deal with the young Spacey hanging around their house when he was in high school says, “Gramps describes his behavior as going around being a huge fag.” My friend asserts the Di Caprio role in the upcoming Tarantino movie is based on his Gramps:

Borders’ “family issues” explanation for resigning from Feminist Avengers Inc. sounds bogus, but it wasn’t. According to an extremely detailed and embarrassing Los Angeles Times account:

Borders stepped down four days after a 31-year-old Santa Monica woman alleged, in a Facebook post, that Borders’ 36-year-old son had been sexually inappropriate with her.

Santa Monica is close to being the physical fitness capital of America, but what the point is of all that exercise seems to be lost on today’s 31-year-olds.

Borders’ son is a Shakti massage therapist, which sounds pretty gay, but apparently he isn’t. In order that he could perform his “healing massage” on her, his friend the 31-year-old Reiki specialist came over to his house and disrobed. A normal male physiological response ensued, which ultimately cost Tchen’s front woman her job.

So leave the Borders family out of the Smollett fiasco. They have enough problems of their own.

Here’s Kim Foxx (who has nothing to do with Kim Fowley and Jackie Fox of The Runaways, nothing) and Kamala Harris:

I’m so excited that @KamalaHarris has decided to run for president. I would not be where I am today without her guidance during my first run for political office, and she has continued to mentor me as I work to reform the criminal justice system in Cook County.  —KF pic.twitter.com/O241FGKKMs