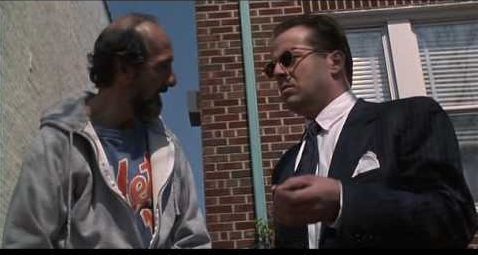 Bonfire Of The Vanities: "Honor Student"

Talk of the immigrant valedictorian reminds me that what constitutes an honor student in the ghetto—or the barrio—is different from what it is in Scarsdale or Greenwich:

This is from the script of the Bonfire Of The Vanities

EXT. LONG ISLAND SUBURB - ED  RIFKIN   is in his driveway sipping a beer and painting a "For Sale" sign. An '81 Corvette is parked in the driveway.

RIFKIN Henry Lamb? Who's that?

He was a student of yours at Ruppert High. In your English class.

He was seriously injured. I'm a journalist. I write for a newspaper.

Oh. I don't remember him.

What I would like to find out is what kind of student he was.

Well, if I don't remember him, I guess he was okay.

Would you say he was a 'good' student?

'Good' doesn't really apply to Ruppert High. They're either cooperative or life-threatening. There's no in-between.

His mother says he was considering going to college.

Well, she means City College. They have an open admissions policy. So, if you live in the city and you graduate from high school and you're still breathing, they have to take you.

RIFKIN I got sixty-five students in every class...

PETER Do you have any of his written work?

PETER Well, there must be some record of how he measures up to the others...

RIFKIN No. See, you're thinking about grades and honor students and high achievers. We don't make those kinds of comparisons. We're just trying to keep them off the street. At Ruppert High, an honor student is somebody who comes to class and doesn't p-ss on the teacher.

PETER (pauses; then) Well, by that standard, is Henry Lamb an honors student?

RIFKIN Well, he never p-ssed on me. So by that standard, yes. I guess he must be.

COPS SIT ON HIT AND RUN