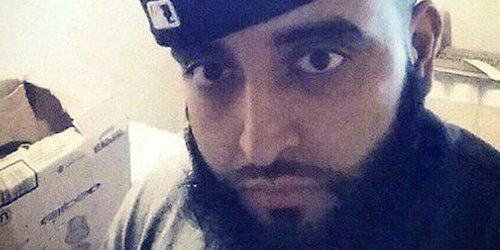 Another LEGAL Muslim Immigrant Is Charged with Jihad Crimes

Above, Nader Saadeh hoped to set up his own little jihad army to crush the infidels.

On Monday, Nader Saadeh, a 20-year-old Jordanian immigrant (or “New Jersey Man” according to the AP) appeared in court to be charged with terror-related crimes. He and some high school friends had big jihad plans to blow up New York City landmarks in the despised America and to help out ISIS with its war in the Middle East. Saadeh and his posse showed up in the July 4 arrests when authorities feared a major attack on the patriotic holiday.

Don’t the instances of “homegrown” jihad seem to be on the uptick? The Independence Day threats, the Chattanooga jihad murders of military personnel, the recent conviction of an Uzbek refugee (“Boise Man”) for terrorism charges have happened in recent weeks.

Investors Business Daily has detected a pattern, particularly in the 70 arrests in this country for ISIS-related plots, and concludes we have a Fifth Column among us. Can we talk about ending Muslim immigration now?

Homeland Insecurity: The FBI’s arrest of a group of New Jersey and New York Muslims trying to organize a “small army” for the Islamic State leaves little doubt we are facing a full-blown Islamic insurgency inside our borders.

According to a just-released federal criminal complaint, five young Muslim men tied to IS were busted conspiring to recruit a small army for the terror group in New Jersey and New York.

The busts bring to 70 the number of IS-inspired terrorists arrested in this country in homeland plots.

Meantime, the FBI reports that all 56 of its field offices have active investigations against other IS suspects.

Federal agents don’t see it that way. They see all these “lone wolves” running in the same religious pack.

On Monday, agents charged Nader Saadeh, a 20-year-old Jordanian immigrant from Rutherford, N.J., with providing material support to IS. Saadeh’s 23-year-old brother, Alaa, along with at least three other Muslims were also arrested in connection with the IS cell.

The complaint says the devout Muslims “discussed building a small army” to attack non-Muslims. In a recorded conversation, one suspect fretted about NSA surveillance and suggested they leave America, to which another suspect stated: “Why? We already infiltrated.”

“Saadeh sent electronic messages expressing his hatred for the United States and desire to form a small army that would include their friends,” the Justice Department said in a statement. “Saadeh posted on his Facebook page images of ISIL’s flag and the flag of the Islamic caliphate.”

The FBI added Saadeh posted anti-American messages online and repeatedly downloaded IS videos and praised the terror group’s atrocities, including beheadings, burnings and the murder of French cartoonists.

He agreed offending the Muslim prophet Muhammad is “reason to encourage Muslims to kill whoever does that.” Some of the IS suspects arrested earlier allegedly were scouting New York landmarks as possible terror targets, including the George Washington Bridge.

Perhaps most chilling, the radicalization of the Saadeh boys appears to have had the blessing of their Jordanian father, who had been deported from the U.S. along with Saadeh’s mother after “sustaining criminal convictions.” The FBI says the father advised one of his sons to “delete everything off his phone” to avoid federal authorities detecting their plans.

The 16-page complaint notes that agents and informants observed “changes in Saadeh’s appearance and behavior” that coincided with his pledging allegiance to the Islamic State. From late 2014 through April of this year, it says he:

• “Grew out his beard and dyed it red,” mimicking Muhammad.

• “Began to fast, and stopped drinking, smoking and eating foods that were not permissible under Islamic law.”

• “Wore traditional Muslim attire in place of the Western clothing he had previously worn.”

• Became “offended and agitated by any conversation or mention of any religion other than Islam.”

These details provide valuable investigative clues for local authorities trying to ferret out other radicalized jihadists in the Muslim community.

Saadeh’s increased piety fits a pattern among IS and other terrorist recruits. The Boston marathon bombers and the Chattanooga shooter underwent the same transformation. The more religious indoctrination they absorbed, the more radical they became.

It also suggests that rooting out this problem will require putting more mosques under surveillance.