Rebecca Carroll, author of an essay in Esquire on how dethroned PBS interview king Charlie Rose is racist because Rose failed to sexually harass her when she worked for him, has been a busy media figure lately. She also recently helped get a disabled guy in a wheelchair, John Hockenberry, fired from his gig on a New York public radio station. From the New York Times:

On Monday, “The Takeaway” itself added another voice to the chorus accusing Mr. Hockenberry of improper behavior: Rebecca Carroll, editor for special projects for WNYC, said on the program that he had made racially inappropriate remarks to her during a meeting soon after she started working at the radio station.

“Probably inside 30 seconds he said to me, in front of the staff, ‘If it feels like a slave plantation mentality here, that’s because it is,’” said Ms. Carroll, who is black. He went on to talk about his efforts championing black voices, she added. 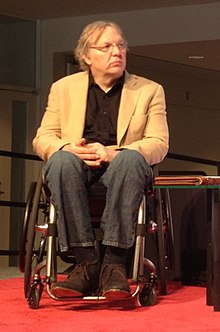 Although Hockenberry is accused of flirting with other women involved with the show, he, like Charlie Rose, appears to have failed to do so with Ms. Carroll. This does not incline her toward mercy toward the poor gimp, to the say the least.

So woke white guys with good jobs: Don’t try to sympathize with blacks. The Ms. Carrolls of the world will just use whatever you say against you. No matter how leftist or paraplegic you are, you’ll always just be a white guy with a good job that they deserve to take away from you.

How did Rebecca Carroll get to be such an authority on so much? As you might expect, nature and nurture play a complicated role, which Ms. Carroll is not averse to telling you about in detail. She has a lot of scores to settle with those near but perhaps not so dear to her. For example, from The Guardian last year:

Facing my fear: hearing myself echo my birthmother’s judgmental outlook

… But the comment that altered our relationship forever was when my birthmother told me that because she had given birth to me, I could not identify myself as black. (My adopted family is white. My birthmother is white, and my birthfather is black.)

Her intention was not merely to erase me, but to erase my blackness – and perhaps worse, to make clear that if I wanted her to consider me as her daughter, it would require that I value my whiteness above my blackness. As a black woman, this hit especially deep, since our erasure is so pervasive in both historical and contemporary America.

When my friend accused me of being overly judgmental, my response reeked of my birthmother’s attacks on my character

So when my friend, who is white, accused me years later of being overly judgmental in regard to her white privilege, my response was swift and yes, it reeked of my birthmother’s relentlessly self-serving attacks on my character.

I leveled all of my anger and resentment over the ubiquity of white privilege and systemic racism solely at my friend, even as I knew that she would not be able to give me the answer I wanted – that the playing field is far from level, the system is rigged, black people are dying and that white people, starting with her, need to stand up and vow to spend as much of their time thinking about this reality as black people do feeling its impact.

The truth is, in this particular friendship, I have long felt unsettled by what I see as my friend’s inability to reconcile her white privilege with my blackness. There were numerous incidents that occurred when we were in college that, in hindsight, had clear racial implications, but that I didn’t confront at the time because all I could hear in my head was that white friend from high school who said to me: “Why is it always about race for you?”

While I believe that any and every black person in America is entitled to be the authority on race as he or she or they experience it, there is, of course, also a need to remember that people respond to love, not persecution. I’d like to believe that however traumatic, I learned this lesson most pointedly from my birthmother, who effectively taught me how to push through one of my biggest fears – being as intensely judgmental as she is. In the process, I failed my friend. I’m sorry about that. But now, having faced down that bitter legacy, I won’t make that mistake again.

I think this means that Ms. Carroll has given herself permission to be as bitchy as she ever feels like being.

“Mom, Why Is Everyone Here White?” What My Son Knows About Race That I Never Did

Who are these people and why did they bring me here to this town surrounded by all these white people? Even my 8-year-old son thinks it’s arcane.

In 2013, the year that Renisha McBride was shot and killed, George Zimmerman was found not guilty in the murder of Trayvon Martin, Paula Deen was confronted for her use of racial slurs, culture-appropriating pop provocateur Miley Cyrus used black women as props in her now notoriously game-changing performance at MTV’s Video Music Awards, two major motion pictures about American slavery were released and grossed significant box office numbers, blackface made an imposing resurgence in Hollywood, on Twitter feeds and Instagram accounts, and “race” and “racism” became the year’s most exploited online click bait, I spent an unseasonably cool August evening in New Hampshire during which I experienced an undeniable epiphany.

I am always cognizant of the extreme whiteness of Warner (97.9 percent white according to the 2010 U.S. Census Bureau — it felt even whiter growing up) and its neighboring towns whenever I go back to visit, although for some reason this time I felt not simply aware of it, but nearly assaulted by it. …

We had just sat down to look at our menus when Kofi leaned over to me after surveying the other customers in the relatively packed dining area, and whispered, genuinely mystified: “Mom, why is everyone here white?”

Even as my husband is white and our son is light-skinned brown, he is being raised in New York City where he attends school with kids and teachers from all different racial and ethnic backgrounds; his father is a college professor who teaches courses and writes books about race and the history of the Civil Rights movement; his mother is black and writes about race in the media; his parents have friends who are black and brown and gay and who visit and discuss race and politics openly, rigorously, often.

I thought it was a good question, though, and so I told my son to ask my parents, since they had chosen to live in this town for over 50 years, and could better speak to the issue than I could.

My father responded: “Because many of the people who live here are descendants of the first settlers to the area — those who worked and farmed the land for their livelihood. And the first settlers were white.” It was a fair enough answer, but in my mind I thought, with decades-long resentment stewing: That may well be, but why then choose to live here while also raising a black child who will then grow up seeing white people everywhere she looks, everywhere she turns, every day, throughout her entire childhood? How is that healthy? Who does that?

For his part, my father continued, as a naturalist he needed to feel connected to and close to what little undeveloped land there was left in the country — like his philosophical mentor, Henry David Thoreau, my father places a high premium on the value of plants and wildlife, swamps and dirt. …

But there were also faces I didn’t recognize, faces that looked at me with expressions of wariness, dismissal and prejudice. …

He was hunched slightly over his plate, cheeks reddened from the brisk weather and intermittent sips of vodka, affable and delighted as locals came up one after another to chat with the town celebrity. My father, even as we struggled our entire lives to make ends meet, is an artist and naturalist of great integrity, and immeasurable ego, and has always believed in himself and his work above almost all else.

In 2006, that belief paid off when he received a MacArthur “genius” grant for his environmental research and published books of natural history, followed by a National Book Award nomination a few years later. Subsequently, he was a big fish in a small pond and tended to revel in his standing with great ease. My mother smiled, ever the undying enthusiast and supporter of my father.

Her adoptive white male father has a Genius Grant and she doesn’t? That’s racist.

Did I mention my adoptive dad, the “genius,” is an alcoholic?