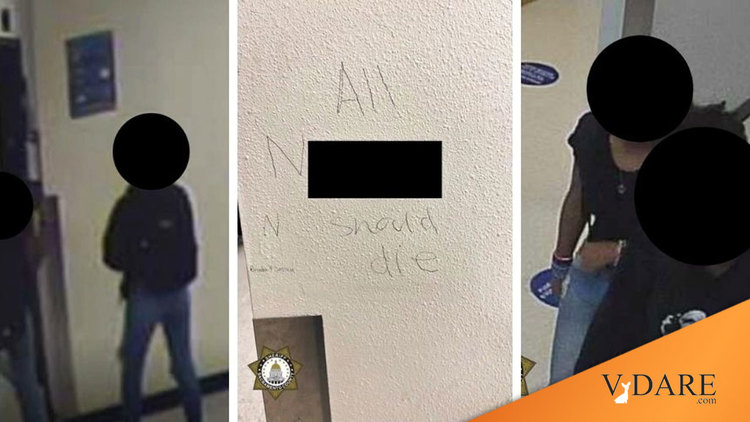 Black Students Commit ANOTHER High School Hate Hoax: School Board President Says It's About A "Safe And Anti-Racist Learning Environment For Our Students"

In a nation where the demand for white supremacy outpaces the supply for white racism, black-originated hate hoaxes (to entrap whites) happen far more than actual hate crimes committed by whites.

Two black students at a Sacramento, California high school are alleged to be responsible for acts of vandalism found on a wall in a school hallway in what an apparent “hate hoax.”

According to the Sacramento County Sheriff, on March 22, at approximately 5:14 pm, officials at Rosemont High School in the Sacramento City Unified School District reported that they had discovered the “All n*ggers should die” scrawled in pencil on the wall of a second-floor hallway in the school building.

Security footage obtained by school officials showed two juvenile black females writing the phrase on the wall, according to the Sheriff’s office.

Though the vandalism resulted in minimal damage, the Sheriff’s office said in a statement that they are consulting with the Juvenile Division of the District Attorney’s Office as to if they should pursue criminal charges. Last week the school district’s superintendent Jorge A. Aguilar said in a statement regarding the incident, “Sac City Unified does not take any incident of racism lightly, and that is why we are widely sharing that another act of disgraceful racist graffiti has taken place in our schools. As a community, we need to loudly condemn this hateful act. Racist incidents will not be tolerated in our schools.” Christina Pritchett, Board President of the Sacramento City Unified School District said in the statement, ”The Board of Education is unified and committed to providing a safe and anti-racist learning environment for our students. We fully denounce all racist behavior, and will continue to do whatever we can to support our African-American community members who need to feel welcomed and loved at our schools.”

The statement also said that “Appropriate disciplinary action will be taken against anyone found to be involved with this incident.”

This is not the first time the district has been the victim of a hate hoax.

The problem is all these black hate hoaxes of perpetuating anti-blackness only increase the fervor for our elite to push forward the idea black people are victims of relentless anti-blackness from whites.

The exact opposite is the truth: anti-whiteness is the hate crime that happens 24/7, committed by both blacks and those white people in charge of our society…because they even turn black hate hoaxes into moments of lecturing white people about their inherent biases.

Even an anti-white act must be retconned as an anti-black action.