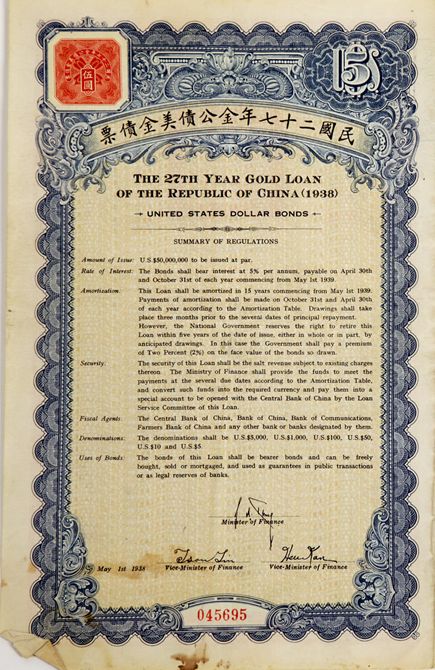 Kirbyjon Caldwell, a black Texas Megachurch pastor who was an advisor to both Bush and Obama, has been arrested for selling pre-revolutionary Chinese bonds to elderly black people. (News stories emphasize neither his blackness nor that of his victims.) These bonds are, of course, absolutely worthless, because the Communists defaulted on them in 1949:

The Securities and Exchange Commission has also filed civil charges against Caldwell and Smith for the alleged fraud, which occurred from 2013 to 2014.

Caldwell, 64, is the senior pastor of Windsor Village United Methodist Church in Houston, which is described by the SEC as "one of the largest Protestant churches in the U.S." Smith, 55, is the manager of Smith Financial Group in Shreveport.

They're accused of bilking 29 mostly elderly investors by selling them Chinese bonds issued before the revolution of 1949, saying that their historical value made them "worth tens, if not hundreds, of millions of dollars" according to a court document from the SEC. "In reality, the bonds were mere collectible memorabilia with no investment value."

The SEC says the bonds have been in default since 1939, and the "current Chinese government refuses to recognize the debt." [More]

Caldwell's been mentioned on VDARE.com before, because he was namechecked in George Bush's famous speech on increasing "minority homeownership", i. e. debauching the credit standards of lenders and causing the 2008 Minority Mortgage Meltdown:

I know we've got some folks from the faith-based community here. Luis Cortes, from Philadelphia is here; and my friend, Kirbyjon Caldwell, from Houston, Texas. Kirbyjon, I had breakfast with him this morning. He told me he was going to have to leave before my speech. He's a wise man, that Kirbyjon Caldwell. (Laughter.) But he has gone back home to Texas. [2002: Bush's Speech To the White House Conference on Increasing Minority Homeownership, September 25, 2008]

Caldwell's relationship with the Bush family stemmed from him being a Texas black preacher, and Governor Bush's twin enthusiasms of Methodism and minority outreach.

His appearance at a "minority homeownership" summit was because he was a "prosperity gospel" guy—a promoter of (I almost said a believer in) faith-based finance of the "leap and the net will appear" school. (It frequently doesn't.)

But since that time, the movement has made itself over, moving out of the fringe and into the upwardly mobile megachurch class. In the past decade, it has produced about a dozen celebrity pastors, who show up at White House events, on secular radio, and as guests on major TV talk shows. Kirbyjon Caldwell, a Methodist megapastor in Houston and a purveyor of the prosperity gospel, gave the benediction at both of George W. Bush's inaugurals. Instead of shiny robes or gaudy jewelry, these preachers wear Italian suits and modest wedding bands. Instead of screaming and sweating, they smile broadly and speak in soothing, therapeutic terms. But their message is essentially the same. “Every day, you're going to live that abundant life!”[Hanna Rosin on the Prosperity Gospel and the Mortgage Meltdown, November 11, 2009]

Kirbyjon Caldwell? Where have I heard that name before?

It's in George W. Bush's speech to the October 15, 2002 White House Conference on Increasing Minority Homeownership:

And then there's my friend Kirbyjon Caldwell. He not only provides counseling and job training, he actually decided to encourage a development of homes in the Houston area. People — low-income people are going to be able to more afford a home in Texas because of Kirbyjon's vision and work. He's answered the call of faith to help people help themselves and to help them realize dreams.

The other thing Kirbyjon told me, which I really appreciate, is you don't have to have a lousy home for first-time home buyers. If you put your mind to it, the first-time home buyer, the low-income home buyer can have just as nice a house as anybody else. And I know Kirbyjon. He is what I call a social entrepreneur who is using his platform as a Methodist preacher to improve the neighborhood and the community in which he lives.

Whew, that's a relief! So we can rest easy knowing that Obama is turning for advice to the same minister who gave Bush such good advice on how first-time low-income homebuyers need zero downpayment mortgages so they can have just as nice a house as anybody else.

After this, I don't think too many Presidents are going to be taking his financial advice.