Pew Poll: Exemption from Deportation Is More Important to Illegals Than Citizenship 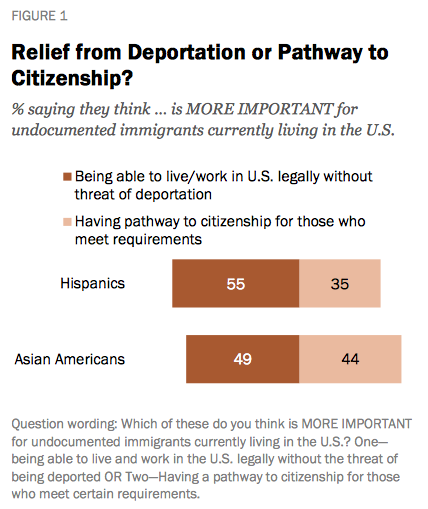 Recent research shows what has been obvious for a long time — many illegal aliens don’t want to join the American community but care only about being able to work here and make money without being repatriated. Unobstructed job thievery is Job #1!

Even among legal immigrants, a sizable number do not want to become American citizens. They do want maximum benefits for minimum commitment, and green card status provides the goodies.

You can read the entire very detailed report online: On Immigration Policy, Deportation Relief Seen As More Important Than Citizenship

Here’s the introduction to the paper:

By 55% to 35%, Hispanics say that they think being able to live and work in the United States legally without the threat of deportation is more important for unauthorized immigrants than a pathway to citizenship. Asian Americans hold a similar view, albeit by a smaller margin—49% to 44%.

The U.S. Senate passed a bipartisan immigration reform bill during the summer, but the measure remains stalled in the Republican-led House of Representatives, where the provision that provides a 13-year pathway to citizenship for unauthorized immigrants has emerged as the major sticking point.

Pro-immigration reform leaders staunchly support that provision, as do large majorities of Hispanics (89%) and Asian Americans (72%), according to the new Pew Research surveys. However, the findings from the same surveys of both groups show that, when dealing with the issue of unauthorized immigration, deportation relief is more important than a pathway to citizenship; this could conceivably create an opening for legislative compromise.

Some 51% of the 35 million Hispanic adults in the U.S. are immigrants, as are 74% of the 12 million Asian-American adults (Pew Research Center’s Social & Demographic Trends Project, 2013). Both groups are growing rapidly, and both flexed their political muscles in 2012 by turning out in record numbers and giving more than 70% of their votes to Obama (Lopez and Gonzalez-Barrera, 2013).2

Not all legal immigrants necessarily choose to become U.S. citizens. In a report published earlier this year (Gonzalez-Barrera, Lopez, Passel and Taylor, 2013), the Pew Research Center found that among all Hispanic immigrants who are in the U.S. legally, just 44% have become citizens; the remainder are legal permanent residents. Among legal immigrants from Mexico, which is by far the largest country of origin for Hispanic immigrants, just 36% have gone through the naturalization process and become U.S. citizens. [. . .]