When I saw this Daily Wire headline (12-Term Democratic Lawmaker 'Showed Up To Work High On Morphine,' Spent $51K On Psychic, By Joseph Curl, September 22, 2017) I knew we were dealing with a black lawmaker, because of the power of stereotypes.

Democratic Rep. Dawnna Dukes, a Texas lawmaker for more than 20 years who has been accused of corruption, once allegedly showed up at a House committee hearing and said she was high on morphine.

The 12-term state representative arrived late to a March House appropriations committee hearing and said: "I know I'm talking a lot. I'm full of morphine and will be headed out of here soon," according to a court filing by the Travis County district attorney's office this week, The Daily Mail reported.

The Mail said that authorities contend the Democrat "was noticeably impaired on one occasion while performing legislative duties at the Capitol."
That charge and others appear in the court filing this week. Dukes faces trial Oct. 16 on corruption charges.

The Democrat is accused of using taxpayer funds to give a raise to a legislative aide to cover gas money for driving her Dukes' daughter to and from school. Dukes is also accused of giving investigators a different cellphone from the one they were seeking when they served her with a search warrant. 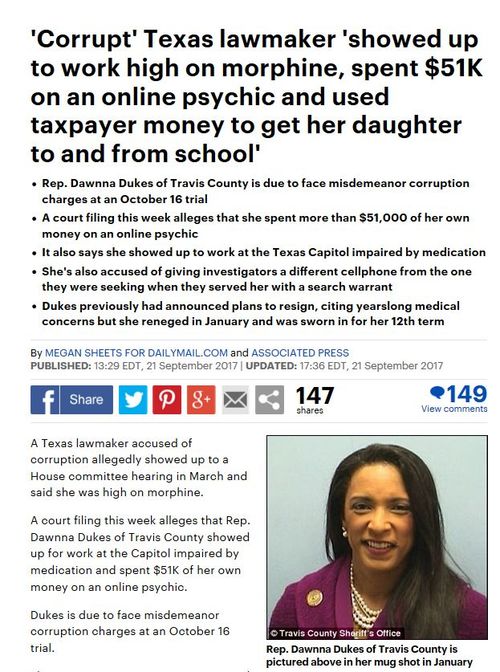 The Daily Mail's headline is, briefly, 'Corrupt' Texas lawmaker 'showed up to work high on morphine, spent $51K on an online psychic and used taxpayer money to get her daughter to and from school'.

Here's something from February:

“It’s the people of their district that need to be pleased, that they need to work hard for, not for someone else in that legislative body,” Dukes said. “It’s great to make friends and be friends, but your best friend needs to be your district.”

For Dawnna Dukes, a lukewarm welcome from Travis County delegation

Dukes’ presence in the House is a sensitive topic for her colleagues in the Travis County delegation because of the 12-term Democrat’s legal issues.

Of course, the point of "your best friend needs to be your district" is that if Texas's 46th State House district, which is 17 percent white, wants to keep electing a corrupt legislator who may be on morphine, they can.

You may wonder if this is one isolated incident, or a trend. It's a trend. See

As for why it may be a trend many news consumers are unfamiliar with, see my report Uninvestigative Journalism—The MainStream Media And Minority Politicians,  which starts out

“The challenge of dealing with minority officials who run afoul of the law is a pre-eminently Democratic problem” wrote Ross K. Baker with reference to Charles Rangel's various scandals. [The Burris problem, USA Today, February 25, 2009]

The other way of putting this it's because the Democrats have so many minority pols that they will continue to have corruption scandals. See Democrats Ignore Minority Corruption In Congress, by Michelle Malkin. (The headline is ours, not Michelle's—the column appeared elsewhere under the title Cold Cash, Hot Democratic Mess.)

But it's the fashion to report the scandals of minority politicians without mentioning their race.