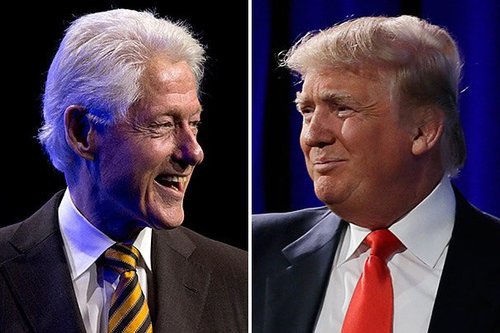 Bill Clinton Encouraged His Golf Buddy Donald Trump in May

Bill Clinton called Trump ahead of his 2016 launch

By Robert Costa and Anne Gearan August 5 at 3:28 PM

Former president Bill Clinton had a private telephone conversation in late spring with Donald Trump at the same time that the billionaire investor and reality-television star was nearing a decision to run for the White House, according to associates of both men.

Four Trump allies and one Clinton associate familiar with the exchange said that Clinton encouraged Trump’s efforts to play a larger role in the Republican Party and offered his own views of the political landscape.

Clinton’s personal office in New York confirmed that the call occurred in late May, but an aide to Clinton said the 2016 race was never specifically discussed and that it was only a casual chat. …

Trump took the call from his office in Trump Tower in New York, according to the four allies, who requested anonymity because they are not authorized to speak publicly. The call came as Trump was making a final decision about whether to run, and he was candid about his political ambitions and his potential interest in seeking the White House during the talk, these allies said.

The 42nd president listened intently and then analyzed Trump’s prospects and his desire to rouse the GOP base, the Trump allies said.

The tone of the call was informal, and Clinton never urged Trump to run, the four people said. Rather, they said, Clinton sounded curious about Trump’s moves toward a presidential bid and told Trump that he was striking a chord with frustrated conservatives and was a rising force on the right.

One person with knowledge of Clinton’s end of the call said the former president was upbeat and encouraging during the conversation, which occurred as Trump was speaking out about GOP politics and his prescriptions for the nation. …

People with knowledge of the call in both camps said it was one of many that Clinton and Trump have had over the years, whether about golf or donations to the Clinton Foundation. But the call in May was considered especially sensitive, coming soon after Hillary Rodham Clinton had declared her own presidential run the month before.

At the time, Trump was touting a “foolproof” but undisclosed plan to defeat Islamic State terrorists and ramping up his presence on the airwaves, including interviews where he was asked about his donations to the Clinton Foundation. He entered the race June 16.

Neither side would provide an exact date for the call, but both Bill Clinton’s office and a person close to Trump described it as “late May.” …

Trump is a longtime acquaintance of the Clintons, both of whom attended the businessman’s third wedding in 2005. Since Trump entered the presidential race, however, he and Hillary Clinton have increasingly traded barbs.

She has condemned Trump’s racially charged remarks about Mexican immigrants and tut-tutted about his remark that Sen. John McCain (R-Ariz.) is not a war hero.

“Donald Trump. Finally, a candidate whose hair gets more attention than mine,” Clinton joked at a Democratic dinner in Arkansas in July. “But there’s nothing funny about the hate he is spewing at immigrants and families, and now the insults he has directed at a genuine war hero, Sen. John McCain.”

That was a rare instance in which Clinton mentioned Trump by name. Also in July, before a largely Hispanic audience, Clinton had this to say:

“I have just one word for Mr. Trump. Basta!”

In June, she criticized Trump, without using his name, over his references to Mexican immigrants as rapists and criminals during his June campaign launch speech.

“A recent entry into the Republican presidential campaign said some very inflammatory things about Mexicans. Everybody should stand up and say that’s not acceptable,” Clinton said in an interview with Nevada political reporter Jon Ralston.

You might think that one way Mrs. Clinton could demonstrate her leadership bona fides is by persuading Mr. Clinton to resign his golf membership at Trump National – Westchester. But apparently that idea is not a Thing.