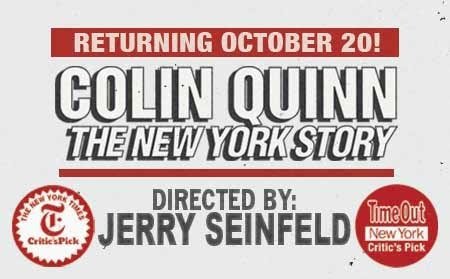 Here are some more Quinn quotes:

- Italians, you were a fun, colorful people, but I don’t think the suburbs are your thing. It’s taking the drama out of you. You need to be yelling at your husbands, or crying, or flirting, and all those things need to be done with a big audience or it gets depressing. … You need to be opera, not reality TV. I suggest you move back to the cities, because you’re not happy where you are.

- There is a serious strain of white self-hatred in our culture right now.

- Once I went on a Law & Order kick and watched sixty episodes over the course of a couple of weeks. Do you know how many of the criminals portrayed on the shows were not white? Three. … If they had their way, TV and movie execs would produce a history of the Crips starring Greg Kinnear.

- There are ten ways to accuse someone of being gay in Puerto Rican Spanish. They may be homophobic, and yet they make the most beautiful transgender women this side of Malaysia.

- Saturday Night Live has always had a weirdly low percentage of Jews for show business—the lowest, I’d wager, of any show that ever lasted more than a year.

Quinn will be doing his one-man show, The New York Story, at the Cherry Lane Theater in Lower Manhattan through August 16. Business has apparently been good enough that it was announced yesterday that it will resume on October 20, 2015.