On Saturday, the Washington Post extolled religious diversity by picturing Fridays Islamic service at the National Cathedral by picturing a serene Muslim worshipper with no beheaded bodies in sight. 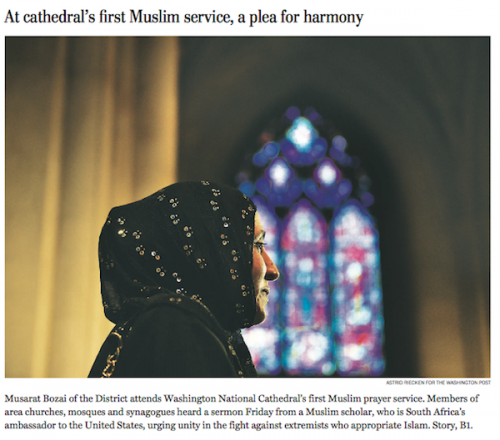 The Post was apparently miffed at the angry Christian woman who objected at the misappropriation of a church space.

In a corner of Washington National Cathedral, several hundred Muslim worshipers and other invited guests gathered Friday afternoon for a first-ever recitation of weekly Muslim prayers at the iconic Christian sanctuary and to hear leaders of both faiths call for religious unity in the face of extremist violence and hate. [. . .]

Nevertheless, the carefully scripted ceremony was marred once when one well-dressed, middle-age woman in the audience suddenly rose and began shouting that “America was founded on Christian principles. .?.?. Leave our church alone!” She was swiftly ushered out by security aides, and the service continued.

Unfortunately, most Americans dont understand Islams supremacist sense of ownership, that Muslims believe their presence in a space essentially homesteads that place for Islam now and in the future. Just today, the BBC reported that the Prime Minister of Turkey made an odd claim about history: Muslims found Americas before Columbus says Turkeys Erdogan. That means they think they own it (us).

Being nice, as Christians like to do, is seen by Muslims as weakness. Allahs henchmen really are inappropriate immigrants.

Texas Congressman Louie Gohmert took to the House floor on Friday to clarify how Muslims see their occupying of the cathedral as staking a claim. 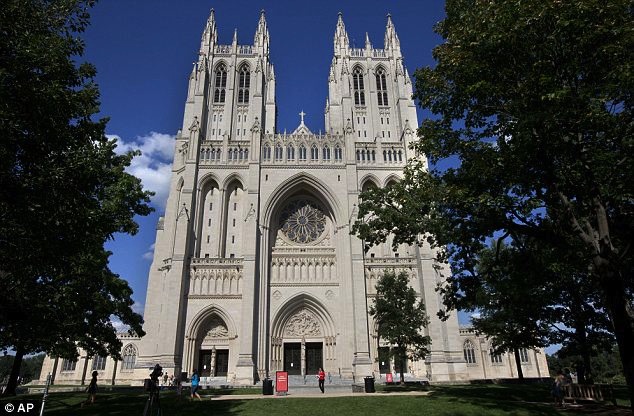 Rep. Gohmert read from the following article in his House speech:

100 years ago today, the last Caliph, or emperor of Islam, declared the last Jihad against the infidel and today is the first time ever that the National Cathedral in the nations capital will host Muslim prayers.

Most Americans will have no idea that, as part of World War I, the then-Caliph of the Ottoman empire declared a Holy War against infidels, as was his right within sharia law and Islamic theology. You can read the full fatwa here (ignore the date of 1915 which is an original typo).

That statement by the last sitting head of what was the theocratic empire of Islam was the catalyst which led to religiously-fueled genocide against Christian Armenians and Assyrians.

The Episcopal church leaders who agreed to the host Muslim prayers inside the Washington cathedral probably have no idea what happened a century ago in Asia Minor, or that there even was a Caliph in office at the beginning of the 20th century.

However, we can rest assured that the co-organizers do, for they include the Council on Islamic-American Relations (CAIR), The Islamic Society of North America (ISNA), The Muslim Public Affairs Council (MPAC) and the All-Dulles Area Muslims Society (ADAMS) Center.

Both CAIR and ISNA will be fully aware of the significance of November 14th, seeing as both organizations were declared by a federal court to be unindicted co-conspirators of Hamas, the Muslim Brotherhood terror group, in the largest terrorist financing trial in US history.

Those muslims who have a supremacist understanding of their religion, such as members of Al Qaeda and the Muslim Brotherhood which was recently declared an illegal terrorist organization in the country of its founding, Egypt have a special regard for historic dates and anniversaries.

It is, of course, no accident that the 9/11 attacks, the worst terror attacks in world history, occurred exactly to the day in 1683 when the Islamic Ottoman forces were defeated outside the city walls of Vienna, the deepest the Islamic Caliphates forces made it into the heart of the Christian West.

There is nothing inherently wrong about interfaith initiatives as long as they start from the same place: a mutual respect for the belief system of the other, and their inherent dignity as humans created by God. When one party acts in bad faith based upon its ideological commitment to see other faiths destroyed or subjected, then the event runs the risk of becoming a propaganda coup for the extremists and their followers.

The fact that this event is occurring just as ancient Christian communities are being destroyed in the Middle East and non-believers are being actually crucified by ISIS jihadists makes it all the more egregious.

We know that the Episcopal church is in trouble with more conservative believers leaving in great numbers and the remaining adherents not exactly outdoing their Catholic cousins in terms of reproducing the next generation of believers. But I doubt they also understand the finer points of jihadist doctrine, one of which is that if a place of worship is used by Muslims for their prayers, that territory subsequently becomes part of Dar al Islam, sacred muslim land. Forever.

Sebastian Gorka PhD is the Major General Matthew C. Horner Distinguished Chair of Military Theory at the Marine Corps University, and national security and foreign affairs editor at Breitbart.com. You can follow him on Twitter at: @SebGorka.