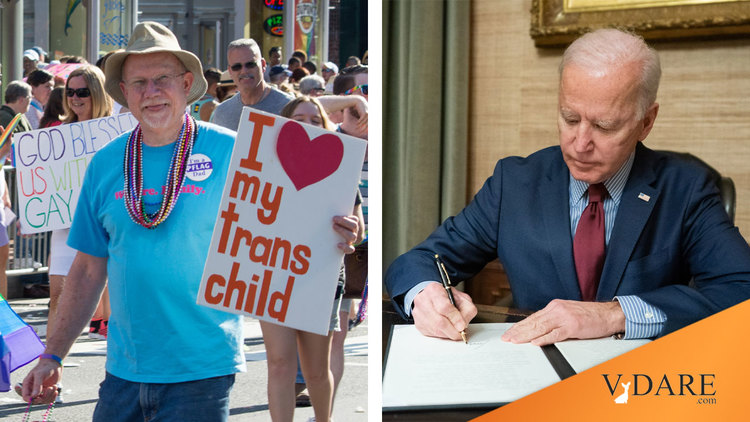 Biden Will Go To The Mat To Ensure That Moody Children Are Poisoned, Mutilated, And Sterilized

Earlier: SLATE: We Must Protect The Right Of Moody Teens To Be Spayed

By SARAH OWERMOHLE and EUGENE DANIELS

President Joe Biden on Wednesday will order his health agency to begin efforts to ban conversion therapy and expand access to gender-affirming treatment after a slew of state attempts to limit transgender health care, particularly for children.

The president’s executive order will call on the Department of Health and Human Services to clarify that federally funded programs cannot offer conversion therapy, a widely discredited practice that attempts to change a person’s sexual orientation or gender identity, and work on a public information campaign about the practice. …

“I have no room in my heart for hatred and I have no time for intolerance, but we don’t live in a world where everyone feels that way, and this administration understands that more action is needed,” HHS Assistant Secretary for Health Admiral Rachel Levine, this first openly transgender senior administration official, said in a statement. “Today’s executive order continues the Biden Administration’s work against prejudice and makes it easier for people living in this country to live their lives openly and freely without fear of harassment, scorn or attack.”

The order comes on the heels of Florida Gov. Ron DeSantis’ move to end gender-affirming care for minors. The Republican governor also banned Medicaid from covering treatments such as hormone replacement therapies and sex reassignment surgery.

Republican Gov. Greg Abbott in February ordered the Texas Department of Family and Protective Services to investigate parents who provide their children with gender-affirming care, comparing it to “child abuse.”

Biden calls out ‘ultra-MAGA agenda’ for attacks on LGBTQ community

An administration official said Biden will sign the order surrounded by LGBTQI+ kids from Texas and Florida who “have been personally impacted” by those policies. One of the children, who organized student walkouts over the “Don’t Say Gay” bill in Florida, will introduce the president. …

Overall, Biden officials said more than 300 bills targeting LGBTQI+ rights have been introduced in state legislatures this year, many seeking to limit health care or promote conversion therapy, a practice condemned by major medical organizations including the largest doctor organization, the American Medical Association, and the American Academy of Child and Adolescent Psychiatry.

The bills “bully kids” and “are out of line with where the American people are,” the administration official told reporters.

… Biden health officials have voiced support for transgender health care and ending disproven conversion therapy, but federal agencies have not yet issued rules that would codify protections for treatment. HHS in November reversed a Trump-era policy allowing providers to deny care based on their religious beliefs and last May expanded an anti-discrimination definition in the Affordable Care Act to include gender identity.

… “We’re prepared for what Biden throws our way,” DeSantis, a potential 2024 presidential contender, said during a press conference this month when he criticized a federal policy that would require schools receiving food and nutrition aid to include anti-discrimination language around gender identity. “We’re fighting on that, don’t worry.”

The Biden Administration, however, appears to define “conversion therapy” as any effort to slow the freight train that hauls a moody child who ever asserts being the opposite gender to poisoning, mutilation, and sterilization.