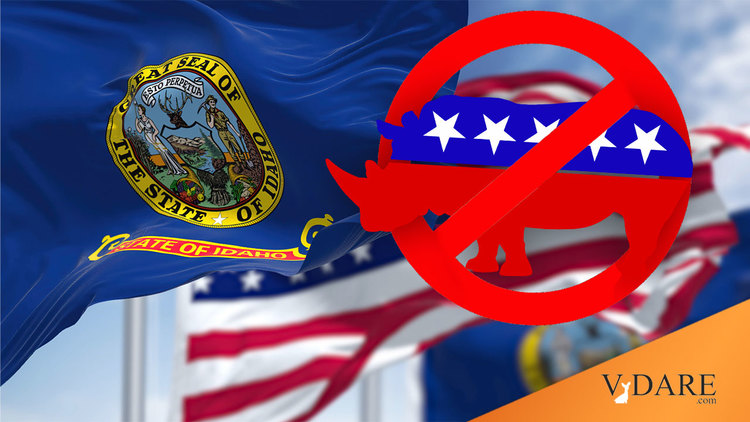 What can be done to prevent the November midterms being a RINO triumph?

Republicans, as I'm sure you know, are polling well to win the House and quite likely the Senate, too. What will that avail us, though, if it just results in more H-1B visas to sideline American middle-class workers, more pointless foreign wars, more handouts to GOP donors, more Uniparty assent to revolutionary cultural change, more Mitch McConnells, Lindsey Grahams, and Mitt Romneys, more Liz Cheneys and Adam Kinzingers?

Daniel Horowitz had a good piece at The Blaze May 19th arguing that the power of the RINOs can be reduced by skillful organization at the state and local levels.

I'll give you the intro:

Idaho has long suffered a paradox, in that it is so dominated by Republicans that it is not so Republican at all. Because it is a de facto one-party state, many liberals who are well connected to the woke industries and lobbyists choose to run as Republicans and use their superior campaign cash to campaign as conservatives, the exact opposite of what they plan to do in office. This is why, despite a 58-12 majority in the House and a 28-7 majority in the Senate, conservatives rarely enjoy legislative wins that other red states are able to easily secure. Last night's elections might have changed that in a big way.

Horowitz: Idaho conservatives poised to remake legislature like never before, May 19, 2022

That phrase "last night's elections" refers to the May 17th primaries to pick candidates for November's elections to seats in the Idaho state legislature. As usual in state-legislature elections, several members of the lower house planned to run for the upper, and of course a lot of incumbents want to run again for the seats they hold.

Well, May 17th was bad news for incumbent RINOs. Twenty of them lost their primaries, pushed aside by conservatives.

Much of this was the work of Idaho's Freedom PAC—that's "PAC" for "Political Action Committee"—which has been actively recruiting candidates to run against against RINO incumbents. Whatever Idaho's Freedom PAC has been doing, PACs in other states should study and copy, especially those states with runoff elections to get around the vote-splitting problem.

It's not going to be easy prising the Republican Party out of the hands of RINOs. Money is the main problem: RINOs are the ones with the big-dollars donor support. Idaho seems to show it can be done, though, at least at the lower political levels.

Overall, conservatives would be wise to focus more on state and local races rather than federal races. Making red states red again and state legislatures great again will go a long way in divorcing ourselves from the morass of Washington. The RINOs can have the irremediably broken federal system, while we focus on rebuilding liberty in some of the states.