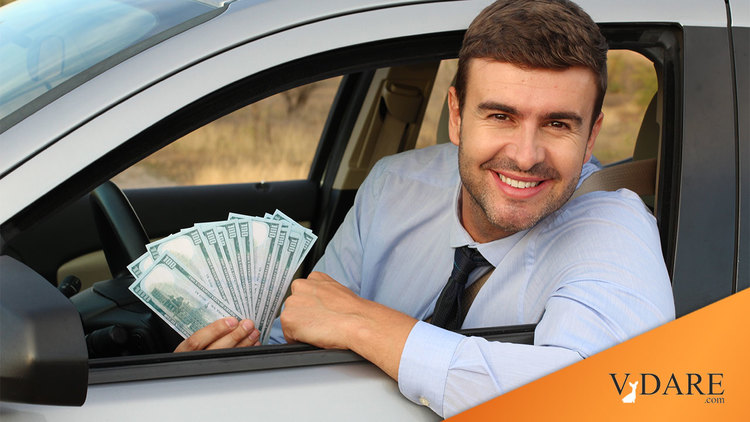 Bari Weiss has an article in City Journal about how rich parents at super elite private schools like Harvard-Westlake in the Hollywood Hills are surreptitiously aghast at how Woke their children’s expensive educations have become:

The Miseducation of America’s Elites

… By normal American standards, they are quite wealthy. By the standards of Harvard-Westlake, they are average. These are two-career couples who credit their own success not to family connections or inherited wealth but to their own education. So it strikes them as something more than ironic that a school that costs more than $40,000 a year—a school with Charlie Munger, Warren Buffett’s right hand, and Sarah Murdoch, wife of Lachlan and Rupert’s daughter-in-law, on its board—is teaching students that capitalism is evil.

For most parents, the demonization of capitalism is the least of it. They say that their children tell them they’re afraid to speak up in class. Most of all, they worry that the school’s new plan to become an “anti-racist institution”—unveiled this July, in a 20-page document—is making their kids fixate on race and attach importance to it in ways that strike them as grotesque.

“They are making my son feel like a racist because of the pigmentation of his skin,” one mother says. …

This Harvard-Westlake parents’ group is one of many organizing quietly around the country to fight what it describes as an ideological movement that has taken over their schools. This story is based on interviews with more than two dozen of these dissenters—teachers, parents, and children—at elite prep schools in two of the bluest states in the country: New York and California.

The parents in the backyard say that for every one of them, there are many more, too afraid to speak up. “I’ve talked to at least five couples who say: I get it. I think the way you do. I just don’t want the controversy right now,” related one mother. They are all eager for their story to be told—but not a single one would let me use their name. They worry about losing their jobs or hurting their children if their opposition to this ideology were known.

“The school can ask you to leave for any reason,” said one mother at Brentwood, another Los Angeles prep school. “Then you’ll be blacklisted from all the private schools and you’ll be known as a racist, which is worse than being called a murderer.” …

Parents who have spoken out against this ideology, even in private ways, say it hasn’t gone over well. “I had a conversation with a friend, and I asked him: ‘Is there anything about this movement we should question?’” said a father with children in two prep schools in Manhattan. “And he said: ‘Dude, that’s dangerous ground you’re on in our friendship.’ I’ve had enough of those conversations to know what happens.”

That fear is shared, deeply, by the children. For them, it’s not just the fear of getting a bad grade or getting turned down for a college recommendation, though that fear is potent. It’s the fear of social shaming. “If you publish my name, it would ruin my life. People would attack me for even questioning this ideology. I don’t even want people knowing I’m a capitalist,” a student at the Fieldston School in New York City told me, in a comment echoed by other students I spoke with. (Fieldston declined to comment for this article.) “The kids are scared of other kids,” says one Harvard-Westlake mother.

The atmosphere is making their children anxious, paranoid, and insecure—and closed off from even their close friends. “My son knew I was talking to you and he begged me not to,” another Harvard-Westlake mother told me. “He wants to go to a great university, and he told me that one bad statement from me will ruin us. This is the United States of America. Are you freaking kidding me?” 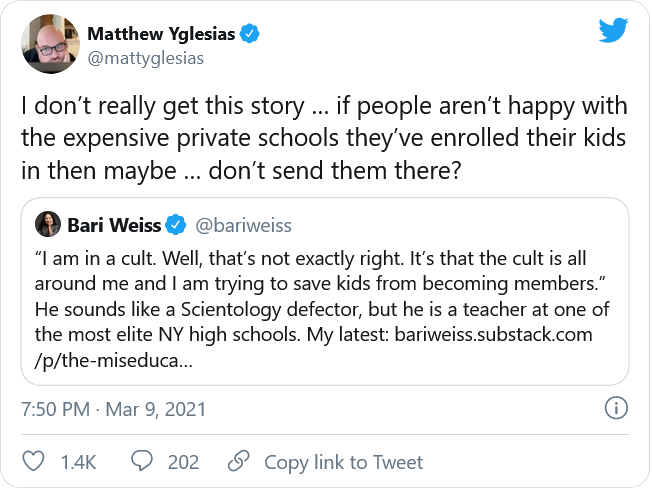 After all, how much could it cost to reproduce Harvard-Westlake’s 12 acre middle school campus in Holmby Hills between Beverly Hills and Bel-Air? 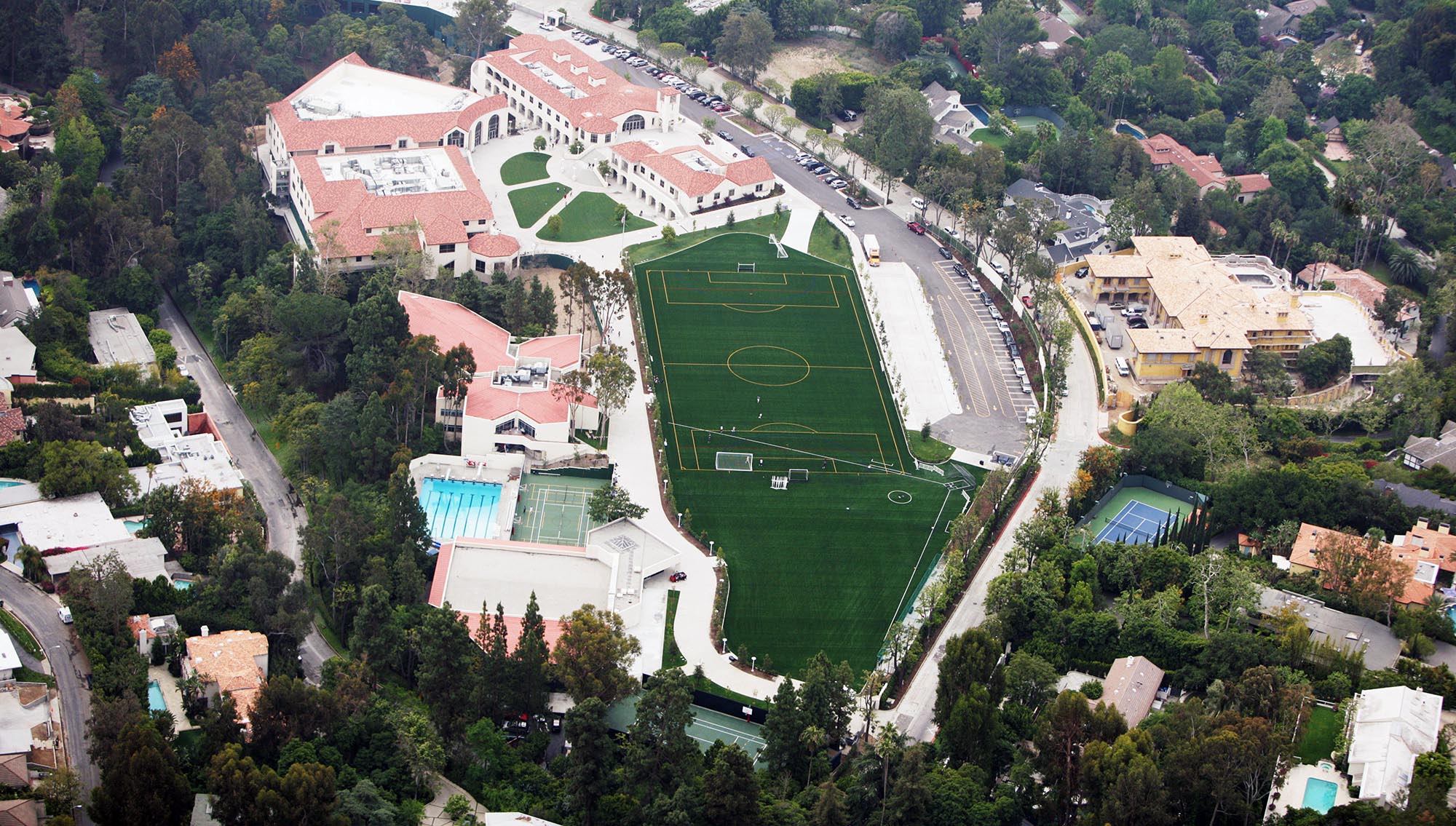 Holmby Hills is a rather pricey neighborhood: note the ~50,000 s.f. mansion under construction across the street.

Or its 22-acre high school campus in Coldwater Canyon? Or its $65 million endowment? Or its long relationship with 97-year-old billionaire Charlie Munger?

So if the Woke hijack Harvard-Westlake for their own purposes, disgruntled parents can always raise $500 mil and start their own unWoke school.

In the case of Harvard-Westlake parents, this might even be true.

How much is the Woke hijacking of private schools with large endowments and paid-for campuses the free market at work vs. how much is it insiders taking over multi-million dollar facilities for their own self-interested ends?

Back in the 2000s, when charter schools were all the rage, I used to point out that simply handing an expensive public school facility over to new management was rife for the potential for abuse. For example, the biggest public high school in Los Angeles, 80-acre Birmingham in the mid-San Fernando Valley, converted over to charter school in a dispute with the school district over who would get the money from all the movie, TV, music video, and advertising productions shot on its campus. (Birmingham employs two full-time coordinators to work with studios.)

But a dozen years ago, the people doing charter takeovers of American public schools, like Imam Gulen of Turkey, were seen as the Good Guys, so you weren’t supposed to question them.

Similarly, taking over lavish private schools in the name of Diversity-Inclusion-Equity to drive out your rivals and hire your friends is something that Captain Hook could appreciate.

Why do the Woke get away with their piracy so often?

First, they are assumed to be the Good Guys and skeptics are the Bad Guys.

Second, Wokeness appeals to people who are meaner, stupider, uglier, and less fair-minded than their peers, but we have a culture in which nobody is allowed to point that out and remain in polite society. So the Woke are using their vices to take over rich institutions.