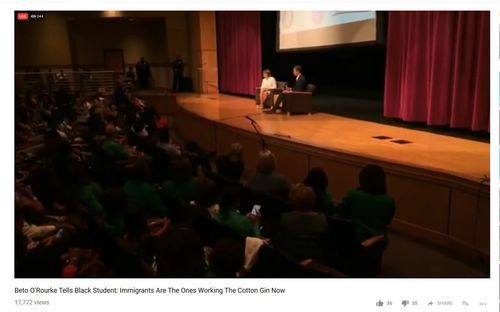 Beto O'Rourke, the Democratic challenger to Ted Cruz in Texas, has been on the receiving end of worshipful media coverage the entire campaign. It is no exaggeration to say that the System media is simply providing advertising for him, with softball interviews and glowing profiles. Clare Malone says the challenger is creating his own "mythology"; it would be more accurate to say that journalists are creating it for him [Beto O'Rourke is crafting his own mythology, FiveThirtyEight, September 20, 2018] Ted Cruz isn't really running against O'Rourke, he's running against the entire System media.

Thus, O'Rourke's latest case of foot-in-mouth should be a crisis moment for the challenger. But don't look for any media discussion of it outside here.

BLACK AMERICAN: My question is, do you support granting citizenship and American-paid benefits to illegal aliens who violated our country to come here, who fly their foreign flags here, who have citizenship in their countries and whose families did absolutely not build this country, while black people are subject to things that you explained before? You can answer yes or no, please. [Emphasis added]

BETO O’ROURKE: Many, many people built this country, first of all. And we are a country of many people … and I’m paraphrasing Congressman Lewis at this point, but he said something to the effect that each of us came to this country in a different ship. Some of us came here against our will, some of us immigrated here lawfully … some of us are showing up right now as we speak. They’re fleeing the deadliest countries in the planet today. The northern triangle countries of Central America … imagine how bad things have to be for you to scoop up that six-month-old daughter of yours and to walk 2,000 miles … to refuge in a country that is comprised of people from the world over. And yes, there are some people who did not follow our laws when they came here to be with their families or to work jobs and, in some cases, no one was willing to work in their communities. [Emphasis added]

I mentioned going to the high school in Roscoe, I also went to the cotton gin in Roscoe. And at that cotton gin, there are 24 jobs and the manager of that gin says it does not matter the wages that I pay or the number of hours that we set … no one born in Roscoe … or Texas or this country who is willing to work. But there are immigrants who are coming from Central America or Mexico or other parts of the world to Roscoe to work these jobs and to help build our economy. [Emphasis added]

Breitbart is focusing on the politically incorrect aspect of this, invoking a "cotton gin" when speaking to black Americans. This is another variant of the "Democrats are the real racists" line so beloved of Conservatism Inc. To be honest, this comment would be considered a major faux pax if a Republican had said it; witness the "macaca moment" that ended George Allen's once promising career. However, since this is the System media's candidate, I expect no one will notice.

Still, what's far worse about O'Rourke's comments is how the supposed progressive again defends cheap labor. We need mass migration, he says, because "no one was willing to work" whatever the wages, at certain jobs. Thus, we need an unlimited supply of peons to do horrible jobs.

This is not just insulting to Americans, whom O'Rourke is implicitly calling lazy, it's insulting to migrants, whom O'Rourke is implicitly calling helots. The logical conclusion of his remarks is an economy that is operating on something akin to indentured servitude. Employers can simply import a foreign working class to run the machines, thus preventing any need to increase wages or invest in labor-saving technology. Meanwhile, the costs of such an underclass are dumped on the larger population.

This isn't progressivism. It's sociopathy. Unfortunately, journalists share O'Rourke's sadistic agenda. Ted Cruz has spoken in the past about the costs of illegal immigration to American workers. Let's hope he can make this case again.