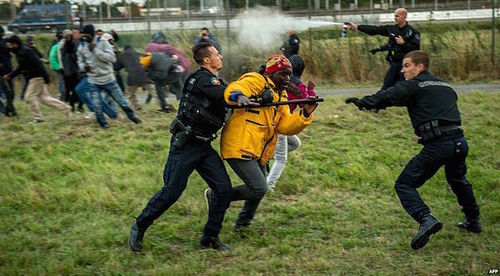 Calais: Invasion Is On as Thousands Rush Tunnel to Britain

The channel tunnel that connects the British island to Europe has become a magnet for thousands of illegal aliens who believe Britain is the most generous distributor of free stuff to foreign moochers. As a result, thousands camp out in Calais, enabled by the free food they receive from French charities, as the foreigners try to hop trucks into the UK.

Over the last few days, huge numbers of Africans and Middle Easterners have made a run on the border and the scene has become dangerously chaotic.

In a July 29 BBC interview (below), UKIP politician Nigel Farage described the situation as worsening over the last six weeks, and that the French have not done enough to stop the violence. He noted the cause: “What Europe has done with the migrant tide that is now coming across the Mediterranean, basically, the European Commission have said that anyone that lands in Greece or Italy can stay. Because of that policy, we’ve seen the massively increased pressure at Calais.”

As an indicator of the general unseriousness about the immigration chaos, Prime Minister David Cameron was slammed by Labour pols for calling the invaders a “swarm.”

On Friday, the New York Times put a Calais photo on the front page above the fold to show the diversity or something: 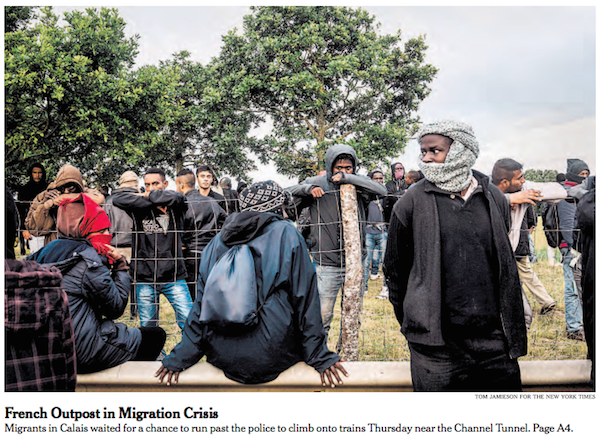 Migrants massed around the entrance to the Channel Tunnel said on Thursday they would keep trying to sneak across to Britain, undaunted by the arrival of 120 extra riot police on the French side.

A police officer said the number of migrants trying to enter Britain eased slightly overnight compared to earlier in the week, with about 800 migrants around the site and some 300 intercepted by police.

That compared to an estimated 1,500 attempts by migrants to enter the tunnel on Tuesday night and 2,000 on Monday. Some were probably repeat attempts by the same people.

Some 3,000 migrants live around the tunnel entrance in a makeshift camp known as The Jungle, making the northern French port one of the frontlines in Europes wider migrant crisis alongside Italian and Greek islands used an entry point for those crossing the Mediterranean from Africa or the Middle East.

Freight and passenger traffic through the rail tunnel have been severely disrupted in past weeks as migrants desperate to enter Britain have stepped up attempts to board trucks and trains travelling from France.

All Europe, you know that the England is good. All, everybody knows that, a 25-year-old Sudanese migrant who gave his name only as Mohammed told Reuters.

He said he wanted to join his brother in Britain.

I want to meet family there, hes waiting (for) me, you know, said the young man, who travelled across the Mediterranean on a boat from Libya. I dont have money now, I dont have a future. I dont have anything. No eat, no sleep, no shower, no house.

The humanitarian and immigration crisis, in which nine migrants have died since early June according to French media, has turned into a blame game between Channel Tunnel operator Eurotunnel and French and British politicians.

Eurotunnel and interior ministry officials were to meet on Thursday to discuss how to cooperate better and improve infrastructure.

HYPOCRITICAL
Former French transport minister Frederic Cuvillier, now a lawmaker from Francois Hollandes Socialist party, told iTele that Britains stance was hypocritical and blamed it for choosing not to be part of Europes border-free Schengen area.

This is what happens when youre not part of Schengen, there are blockages and unacceptable humanitarian situations when you let others handle the problems you have created yourself, he said.

Anti-EU parties on both sides of the Channel have seized on the drama to insist that national borders be better defended.

On the other side of the Channel, the leader of the anti-EU UKIP party Nigel Farage called in a video posted on the Daily Telegraphs website for British troops to check all vehicles arriving in the country.

Its pretty frightening, youre sitting there in the car, stuck in the motorway, and there are scores of people all around you, he said, describing what he said was his own experience of driving across the Channel.

I even had one trying to open the backdoor of the passenger seat, he said.

Britains ambassador to France, Peter Ricketts, tried to ease tensions, telling Europe 1 radio that Britain and France were working well together on the issue.

Britain is not an Eldorado for those who want to work in the black economy. We have tightened access to benefits, he said.

But near Calais, migrants were undeterred.

Yeah, I know, its danger, but I have no passport. Have no anything. Then I try with train, but the police of France is not good, a 20-year-old female migrant who did not give her name but said she came from Eritrea in East Africa said.

The young woman arrived in Calais one week ago after she made the perilous journey across the Mediterranean from Libya. She said she wanted to travel to England to teach.

I like England. To teach, more teaching, to work, plus in my country there are problems, like politics, plus religion. Thats why Im coming to England, she said.