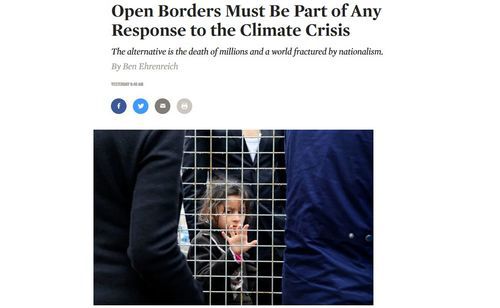 Ben Ehrenreich In THE NATION: "Open Borders Must be Part of Any Response to the Climate Crisis"

The alternative is the death of millions and a world fractured by nationalism.
By Ben Ehrenreich YESTERDAY 8:40 AM

Borders, like nations, present themselves as natural and eternal. They are neither, but movement is. Humans have been on the move for hundreds of thousands, perhaps even millions of years.

Progressives, like Ben Ehrenreich and Angela Saini, are rapidly adopting Conan the Barbarian’s definition of what is best in life.

… Manufacturing a “crisis” at the borders in order to justify their further hardening has for decades been a project of the super-rich, one achieved through years of investment in think tanks, media, and political candidates spouting “populist” rhetoric. …

This is just the beginning—of the climate crisis, and the political unravelings that will continue to accompany it. And so, it is time to shout, and loudly, that the freedom of all the earth’s people to move across borders must be at the center of any response to the climate crisis. Unless we do, racism and fear—hidden as always in the guise of “security”—will give way to fascism and war before the tides get a chance to drown us.

Authoritarian solutions are most appealing in times of great uncertainty, which is exactly where we’re at. Eco-fascism, a green-tinged white nationalism that puts a tad more emphasis on the “soil” pole of the old blood-and-soil dyad, was once a fringe phenomenon. No more: Its esoteric strands motivated the shooter in the Christchurch mosque massacre, who described himself as an eco-fascist, but it’s also easy to hear in the president’s latest Twitter refrain: “Our country is FULL.” In a more respectable and dopier form, you can find it echoing through the New York Times op-ed page, where Tom Friedman recently called for an immigration policy that would involve “mitigating climate change” while building a “high wall” with a “smart gate” that allows only “high-energy and high-I.Q. immigrants” to pass.

… But how different from the ugliest forms of “race realism” is the realism, so-called, that guided American policy for much of the last century? “We have about 50 percent of the world’s wealth but only 6.3 percent of its population,” George Kennan wrote in a State Department memo in 1948. “Our real task in the coming period is to devise a pattern of relationships which will permit us to maintain this position of disparity.”