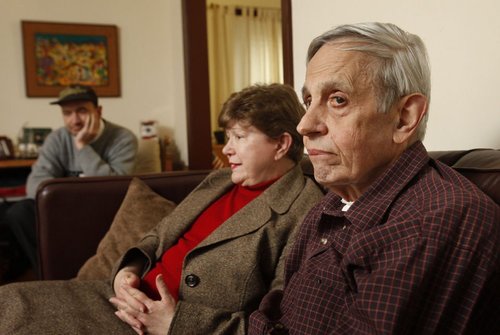 When I saw this report, it was accompanied by the note that you should wear your seatbelt in taxicabs. I was willing to question that, but the accident happened on a turnpike, and the two victims were ejected. The driver, required by law to wear a seatbelt, survived.

Famed 'A Beautiful Mind' mathematician John Nash, wife, killed in N.J. Turnpike crash Ted Sherman and Myles Ma | NJ Advance Media for NJ.com By Ted Sherman and Myles Ma | NJ Advance Media for NJ.com MONROE — John Forbes Nash Jr., the brilliant Princeton University mathematician whose life story was the subject of the film "A Beautiful Mind," was killed with his wife Alicia on Saturday in a crash on the New Jersey Turnpike. Nash was 86. Alicia Nash was 82. The couple lived in Princeton Junction. Police said the two were in a taxi traveling southbound in the left lane of the turnpike when the driver of the Ford Crown Victoria lost control as he tried to pass a Chrysler in the center lane, crashing into a guard rail near Interchange 8A in Monroe Township, according to State Police Sgt. Gregory Williams. They couple was ejected from the car, Williams said. A friend said the pair was on their way home from the airport after a trip to Norway, where Nash last week received a prestigious mathematics award. "It doesn't appear that they were wearing seatbelts," he said. The second vehicle also crashed into the guard rail, Williams said. The taxi driver was extricated from the vehicle and flown to Robert Wood Johnson University Hospital in New Brunswick with non-life-threatening injuries. He was identified as Tark Girgis, 46, of Elizabeth. A passenger in the Chrysler was treated for neck pain. The crash was reported at 4:30 p.m. The couple were pronounced dead at the scene at 5:18 p.m., said authorities. A spokesman for the Middlesex County Prosecutor's office said no charges were expected to be filed in the case.More

Emphases added. Now, everybody on Twitter is talking about seatbelts:

Is it too soon to say that Nash made a pretty poor decision strategy to not wear a seat belt? Especially sad if this was preventable. RIP

I had an ex who would make fun of me for wearing a seat belt in a cab. Sounds like it would have saved John Nash's life. — Robin Ward (@eviltrout) May 24, 2015

Nobel Prize Winning Mathematician on the one hand - Didn't use a Seatbelt on the other. http://t.co/HHNQhPoIky

You'd think the brilliant mind behind the development of Game Theory would have found the Nash Equilibrium of putting his seatbelt on. — Chris W (@ComehDota) May 24, 2015

A search for "Nash Egyptian driver" finds one Tweet—from an Egyptian.

@nasry guessing from his name, I think the cab driver was Egyptian! http://t.co/t7PIxEUH9a

Now, here's what you need to know about Egyptian drivers in Egypt—they're the third most dangerous in the world, beaten only by Eritrea and the Cook Islands. Here are some figures from the World Health Organization:

Road safety in Egypt Egypt loses about 12 000 lives due to road traffic crashes every year. It has a road traffic fatality rate of 42 deaths per 100 000 population. Majority (48%) of those killed are passengers of four-wheelers though pedestrians also constitute a significant proportion (20%) of these fatalities

And here's a piece from the Middle East Institute on the general "Mad Max" state of Egyptian traffic:

Cairo’s Ring Road, a peripheral highway linking the city’s core to surrounding districts, is an eight-lane free-for-all, with cars, buses, and overloaded trucks weaving randomly at high speeds. “I for one consider it to be an off-road, not a highway,” says Mahmoud Mostafa Kamal, editor of the online Arabic-language automotive magazine, el-Tawkeel (The Dealership). “There are parts where you can actually see [through fissures in the pavement] people walking beneath.”[1]  “It’s sort of like a video game,” said Ayman Samir, one of the drivers featured in the 2013 documentary, Cairo Drive, referring to the stream of hazards the “player” must artfully avoid.[2] Despite the growing risk involved in navigating this and Egypt’s other heavily-trafficked, poorly-maintained roads, little is being done to address the problem. [Traffic Accidents in Egypt: The Need for Reform, By Maria Golia, November 24, 2014]

Alcohol use in Egypt is moderate—most of those people crashing are stone cold sober.

That's what you need to know about Egyptian drivers in Egypt.What I'm saying is that if you want to import taxi drivers from a foreign country, don't choose Egypt.

What you need to know about Egyptian taxi drivers in America is this—there are more of them every day, and it's illegal to discriminate against them.