Yesterday I reported about the death of the fine journalist Bob Simon, with a note at the end that a diverse driver was responsible for the car crash that killed him.

Now we learn that the taxi driver is an Afghan immigrant, Abdul Reshad Fedahi, who lives in a homeless shelter and has a long list of license suspensions. And one of his arms doesn’t work.

How does a man like that get a job where he is responsible for the safety of the public? Was Fedahi given a pass because he is a foreigner?

On one hand, Mayor De Blasio’s New York City is the perfect liberal nanny zone of behavioral control, where he has banned styrofoam and is working to limit sugared soft drinks.

Meanwhile, the mayor has reduced genuine strategies to protect public safety, particularly by undermining police counter-terrorism to appeal to his Muslim constituents. 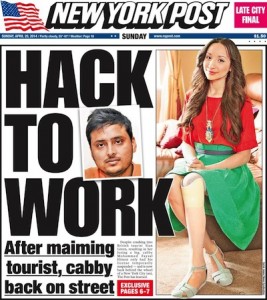 The city has been even worse in traffic safety. In 2013, young British tourist Sian Green lost her leg when a Muslim cabbie with anger-management issues struck her on the sidewalk near Rockefeller Center.

The driver, Bangladeshi Mohammed Faysal Himon, was trying to run down a bike messenger who irritated him and wouldn’t let a crowded sidewalk get in his way.

Yet a few months later, Himon was driving a cab once again, because the city refused to prosecute or even bar him from taxi work.

As a reminder of who has been lost, here is one more Bob Simon report worth a look, his 2011 visit to the Orthodox Christian community of monks on Mt. Athos in Greece. 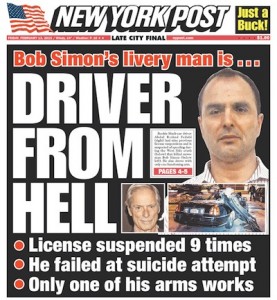 The New York Post can be effective at expressing the popular rage, as it does in this case. The Simon death increasingly looks preventable, had the city done proper safety regulation of cab drivers.

CBS newsman Bob Simon’s black-car driver was a rookie with nine license suspensions who is suspected of speeding during the fatal crash — and had just one hand on the wheel because he had a “dead” left arm from a suicide attempt, sources said Thursday.

Investigators believe Abdul Reshad Fedahi, a 44-year-old Afghan immigrant who lives in a homeless shelter, mistakenly hit the gas instead of the brake after sideswiping a car on the West Side Highway at about 6:45 p.m. Wednesday, law enforcement sources said.

“He hit the gas pedal instead of the brake. He sped up after hitting the car,” a law enforcement source told The Post.

“There were no skid marks,” a source said.

The Lincoln Town Car had been heading downtown in the left lane. It appeared to have been speeding — going up to 50 mph in a 35-mph zone — when it grazed a Mercedes-Benz C30 driven by Zachary Miller, 23, in the center lane near West 30th Street, law enforcement sources said.

The Town Car then veered to the left, slamming into the metal barriers, or bollards, that separate the highway’s northbound and southbound lanes, sources said.

Simon, a “60 Minutes’’ correspondent and legendary war reporter, was sitting in the rear seat without his seat belt, sources said. He suffered a broken neck and severe stomach and head trauma.

“The car is crushed. He was crushed. He had broken legs. His chest was crushed,” a source said, adding that the Bronx native had to be extricated from the mangled wreck through the roof.

Simon, 73, went into cardiac arrest on the way to Roosevelt Hospital in Midtown, where he was pronounced dead at about 7:20?p.m.

His wife, Francoise, was holed up in the couple’s West 70th Street home Thursday, beside herself with grief, said Charles Weiss, an old family friend.

“She has a habit of talking a lot. Now she can’t stop. It’s just left her devastated,” said Weiss, a former Voice of America correspondent who has known Simon for decades and was in Iran in 1991 when he was released after being held for 40 days by Iraqi forces.

“Interestingly enough, at the time, he was suspected of being a Mossad agent and my assignment was to get Palestinians to testify to the fact that he was a good friend to the Arabs,” said Weiss.

Fedahi suffered two broken legs and a broken arm. He was treated for a possible heart attack at the crash scene, but sources said it did not appear that he suffered one.

He was taken to Bellevue Hospital, where a cousin who visited him Thursday said the driver had told him he “blacked out” just before the crash and doesn’t remember what happened.

“He said he picked him [Simon] up a couple of times before. He feels really bad. He had tears in his eyes,” Rauf Sharif recalled.

Fedahi has not been charged in the crash.

He started working as a black-car driver for Skyline Credit Ride only in October 2014. Skyline, based in Long Island City, Queens, has had a contract with CBS for more than 30 years.

His car was owned by Travez Transportation, and when he wasn’t working, he would use it to ferry pals from the homeless shelter where he lived on Wards Island to Manhattan, friends said.

Fedahi had a probationary license with the Taxi and Limousine Commission that has been suspended pending the investigation into the fatal wreck.

Records show he also had two moving violations on his regular driver’s license — for traveling 70 mph in a 65-mph zone in Ulster County on Sept. 29 and for “disobeying a traffic device’’ in Manhattan on Jan. 8, 2014.

His license was suspended nine times for failing to pay fines and ignoring summonses. All had been cleared, the DMV said.

Fedahi’s daughter left her house in Ozone Park — where she lives with his ex-wife and her new husband — with her father’s 65-year-old cousin, Safi Mohammed, to visit him at Bellevue.

“She called this morning and said, ‘I want to go and see my dad.’ So we got the car and we are taking her,” Safi said.

Sources said Fedahi lost the use of his left arm after he jumped from a Brooklyn building in a suicide attempt about a decade ago.

“He has a messed-up arm. One arm doesn’t move at all. He does everything with one arm,” said Luis Mendez, 31, who lives in the same shelter.

Another driver at Skyline said Fedahi should never have been on the road — and that he was fired after customers complained about his driving, only to be rehired by a new manager.

“The management changed. He was let go by the old management because passengers were complaining that he couldn’t lift bags and they didn’t want to be in a car with a driver with only one hand,” the driver said.

A TLC rep said the agency requires all cab drivers to have a doctor’s certification of fitness, and that Fedahi had one.

Miller, the Mercedes driver, was not hurt in the accident.

“It’s definitely possible” that Fedahi hit the gas instead of the brake, Miller said.

As for Simon, he said, “I’m devastated to hear that he had died, and I wish there was something anyone could have done to prevent this horrible thing from happening.

The award-winning newsman had just wrapped up what would be his last segment for “60 Minutes” — a piece on the Ebola virus produced by his daughter, Tanya, that will air Sunday with an as-yet-unnamed substitute doing the introduction.

“Simon was preparing a ’60 Minutes’ report on the Ebola virus and the quest for a cure for it for this Sunday’s broadcast. He was working with his daughter, Tanya, a ’60 Minutes’ producer with whom he collaborated on several stories for the program,” the network said.

His wife told cops that he had been headed to a medical seminar being given by a doctor friend downtown when the accident occurred, sources said.

Investigators have the “black box” from the Town Car but will need a warrant before they can download the data on it, including its speed and whether the brakes were applied, sources said.

“Have you ever seen somebody who was hit by a subway? It was a little less severe than that,” a source said of Simon’s injuries.