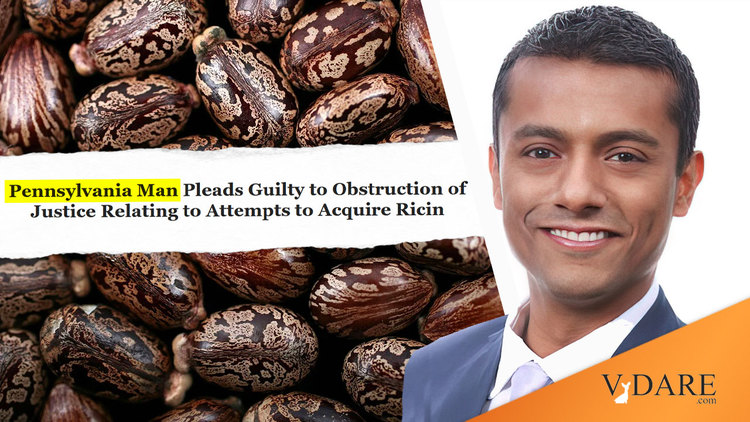 Those “Pennsylvania” men!? Federal judge Richard Stearns sentenced yet another one, Ishitiaq Ali Saaem, 37, to three years of probation, including six months home confinement, for lying about his reasons for purchasing castor beans to make ricin, a deadly toxin [Biotechnology Firm Director Sentenced for Obstruction of Justice Relating to Attempts to Acquire Ricin, Justice.gov, March 31, 2022].

Except Saaem, contrary to the U.S. Justice Department’s report on his guilty plea, is no “Pennsylvania man” [Pennsylvania Man Pleads Guilty to Obstruction of Justice Relating to Attempts to Acquire Ricin, April 13, 2021].

He was, in fact, a “Bangladeshi national residing in Massachusetts,” the news release about his sentence says. This is what he did:

Saaem held a Ph.D. in biomedical engineering, resided in Massachusetts and worked as the director of advanced research at a biotechnology firm based in Massachusetts. Saaem became interested in acquiring ricin from castor beans as well as convallatoxin, a poison found in lily of the valley plants, after watching “Breaking Bad,” a popular television show. Saaem ordered 100 packets of castor beans online, each containing eight seeds. Saaem falsely told law enforcement agents that he purchased castor beans for planting at his apartment for decoration and that he had accidentally purchased 100 packets instead of one. After he spoke to agents, Saaem researched tasteless poisons that could be made at home.

During subsequent meetings with law enforcement, Saeem stated that his interest in buying castor beans related to an interest in gardening. He also made misleading statements about his knowledge of ricin.

Prediction: It’s only a matter of time before one of these terrorists attempts to poison our food or water supplies, or actually does so.