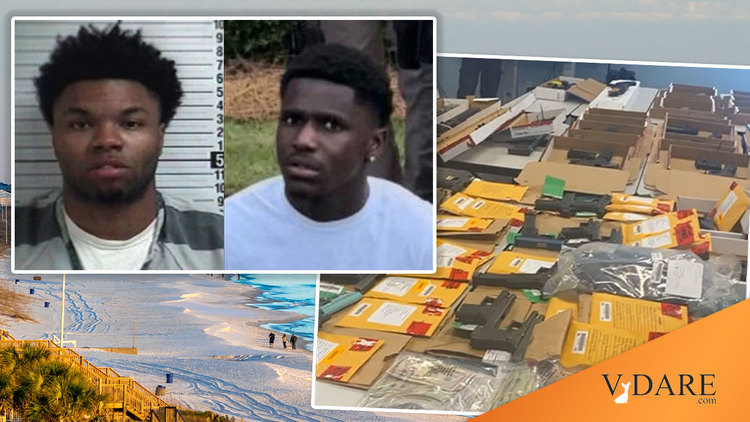 If Panama City, Florida Were A "Sundown Town," Would The Massive Black Riots Of Spring Break 2022 Have Happened?

Why exactly did sundown towns exist throughout Florida so long ago, when white elected officials passed laws to not only protect their constituents and local businesses (producing tax revenue), but also for their posterity? There had to be a reason, right?

They wanted to protect the reputation of their cities, right? Well…welcome to 2022.

For a part of the country long known derisively as The Redneck Riviera, a racial group that's hard-pressed to tan was responsible for the shocking levels of violence during Spring Break that sundown town laws once kept away.

Following disorder in Panama City Beach that resulted in the arrest of dozens of people from Alabama, two alleged ringleaders have been arrested in Alabama.

Over the weekend of March 25-27, officials in Panama City Beach, Panama City and Bay County, Fla., contended with an influx of people that Panama City Beach Mayor Mark Sheldon described as “criminals who came to our town to be lawless and create havoc.”

A shooting injured a man from Alabama on March 27; overall, more than 160 people were arrested, including 78 from Alabama, and 75 guns were confiscated.

According to information released Thursday by the Panama City Beach Police Department, Demarion Ty’Quan Cooper, 20, of Troy and Rashad Boyce Glasper, 25, of Wetumpka were arrested Thursday at their homes in Alabama on warrants for inciting or encouraging a riot.

Following the events of March 25-27, Florida officials said that individuals they identified as promoters or social media influencers had built interest in events billed as “shutdowns,” “takeovers” or “invasions.”

Thursday’s announcement said investigators had “determined Cooper and Glasper played a substantial role in promoting and influencing their followers to create this disorder with a propensity for violence.”

Problematic incidents described local authorities included a club show at which the number of tickets sold appeared to be triple or more the number of people the venue could safely hold.

That particular incident didn’t lead to violence but created traffic problems and other headaches. Thursday’s announcement didn’t specify any particular events that Cooper or Glasper might have been involved with.

According to the announcement, Cooper waived extradition and has been transported to the Bay County Jail to await his first court appearance. Glasper was being held at the Elmore County Jail pending extradition.

“Several investigations into the criminal activity that occurred during the weekend of March 26 are ongoing,” said the Panama City Beach Police Department announcement. “Additional charges and arrest for several individuals should be expected.”

If Panama City were a sundown town in 2022, would the insanity of this past Spring Break and the riots that broke out have ever occurred or required such massive police presence to put down?

What our ancestors did in the past to preserve our civilization gives us massive clues to what is required to do the same in the present, to ensure our posterity actually inherit a civilization worth not just protecting, but perpetuating.