Automation Will Revolutionize Retail for Shoppers and Workers

A recent Wall Street Journal piece framed its robot-replacing-human story by focusing on one employee who loses her job counting cash, but is moved to a greeter position at the same wage. Since the unnamed woman is 55, her gig as human greeter will likely go to a robot when she retires, if not before, because that technology is already available.

The LoweBot hardware store machine welcomes shoppers and offers them directions about where to find their desired items. 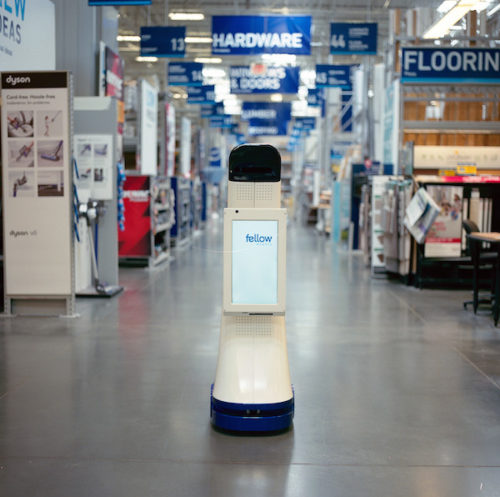 Also, a back-office cash-counter job lost to a smart machine occurs out of the public eye, like so many others. It’s great that President Trump’s economic and trade policies are emphasizing Made in America, but the long term trend is toward more automation and fewer human workers. In addition, automation is a worse cause of factory job loss than bad trade deals.

The automated future has been sketched out by various experts. Oxford researchers forecast in 2013 that nearly half of American jobs were vulnerable to machine or software replacement within 20 years. Rice University computer scientist Moshe Vardi believes that in 30 years humans will become largely obsolete, and world joblessness will reach 50 percent. The Gartner tech advising company believes that one-third of jobs will be done by machines by 2025. Forrester Research Inc. has a more optimistic view, that there will be a net job loss of 7 percent by 2025 from automation.

The retail industry is particularly susceptible to automation, with cashiers being first on the chopping block because self-checkout is very simple technology. Six million retail jobs could be lost in the next decade.

Plus, retail is getting clobbered by Amazon, which could not function without robots and computerization.

It’s baffling how Washington can be so clueless about the revolution beginning to occur in America’s workplaces. Perhaps the Masters of the Universe are in mass denial because they cannot think of a fix, or maybe the swamp gas is just too thick for them to see what’s happening.

Not a whole lot can be done, since the market forces toward cheaper means of production are powerful. But it certainly makes sense to end immigration entirely since the need to import inexpensive foreign workers is over. In fact,

Wal-Mart and other large retailers, under pressure from Amazon, turn to technology to do workers’ rote tasks

Last August, a 55-year-old Wal-Mart employee found out her job was being taken over by a robot. Her task was to count cash and track the accuracy of the store’s books from a desk in a windowless backroom. She earned $13 an hour.

Instead, Wal-Mart Stores Inc. started using a hulking gray machine that counts eight bills per second and 3,000 coins a minute. The Cash360 machine digitally deposits money at the bank, earning interest for Wal-Mart sooner than if sent by armored car. And the machine uses software to predict how much cash is needed on a given day to reduce excess.

“They think it will be a more efficient way to process the money,” said the employee, who has worked with Wal-Mart for a decade.

Now almost all of Wal-Mart’s 4,700 U.S. stores have a Cash360 machine, making thousands of positions obsolete. Most of the employees in those positions moved into store jobs to improve service, said a Wal-Mart spokesman. More than 500 have left the company. The store accountant displaced last August is now a greeter at the front door, where she still earns $13 an hour.

“The role of service and customer-facing associates will always be there,” said Judith McKenna, Wal-Mart’s U.S. chief operating officer. But, she added, “there are interesting developments in technology that mean those roles shift and change over time.”

Shopping is moving online, hourly wages are rising and retail profits are shrinking—a formula that pressures retailers, ranging from Wal-Mart to Tiffany & Co., to find technology that can do the rote labor of retail workers or replace them altogether.

As Amazon.com Inc. makes direct inroads into traditional retail with its plans to buy grocer Whole Foods Market Inc., Wal-Mart and other large retailers are under renewed pressure to invest heavily to keep up.

Economists say many retail jobs are ripe for automation. A 2015 report by Citi Research, co-authored with researchers from the Oxford Martin School, found that two-thirds of U.S. retail jobs are at “high risk” of disappearing by 2030.