Automation Versus The High Cost Of Cheap Labor 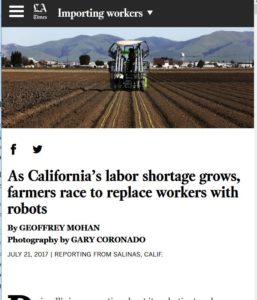 The Los Angeles Times ran a story about farm mechanization in Salinas, California, and much progress is being made. (See As California’s labor shortage grows, farmers race to replace workers with robots, by Geoffrey Mohan, July 21, 2017) Reducing farm labor is very good news. Salinas is the strawberry capital of the US. Santa Maria, California, is second. All of the "cheap labor" became available after 1986 when IRCA passed and illegal aliens crossed the border by the millions. I know first hand because I did county budgets in Santa Barbara.

The biggest public cost is educating farmworkers' children but their US-born children are eligible for all welfare programs including Medicaid, SNAP, TANF.  Their illegal parents get free medical treatment courtesy of the state of California and the counties. Poor people cannot be turned away.

Besides the fiscal costs, the social costs of unskilled labor are huge. Santa Maria, California, for example, used to be a middle-class city forty years ago but now gangs and murders are common. Last year, a 15-year-old murdered her newborn. Maribel, the teen mother, does not speak English.

Her parents are Mixtec farmworkers from Oaxaca, Mexico, who worked broccoli fields. They speak Mixteco. Maribel killed her baby with one of their broccoli-harvesting knives. (A broccoli knife is a foot long and has a seven-inch blade.) The defense attorney said Maribel had been traumatized by being left in Mexico with her cousins and repeatedly raped by them from ages seven to eleven. The father of the baby was sixteen and he is from Mexico also. Maribel was convicted. [Santa Maria Trial Begins For 15-Year-Old Girl Accused of Killing Newborn, By Janene Scully, Noozhawk, October 4, 2016 ]

Hopefully, machines will help put an end to our dependence on unskilled foreign labor. Cheap labor is very expensive in many ways.