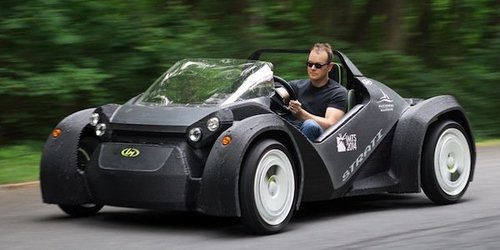 Above, Local Motors’ Strati model reveals some of its print layers if you look closely at the front.

As Washington plods along with its 20th century assumptions regarding labor and the economy, the technology-fueled future is here and changing all the rules. Just when we have adjusted to the idea that cars are produced by a robot factory with few humans, now the 3D printer is being rejiggered to build autos.

That concept shouldn’t be too much of a stretch, since an experimental house is being printed in Amsterdam and automation is being introduced in construction generally.

On Friday, Fox Business’ Stuart Varney interviewed Local Motors CEO Jay Rogers about his company’s development of the 3D printing process to build cars. Rogers says everything will be printed except the motor and the wheels. Varney observed, “It looks to me like you have gotten rid of the labor force. I didn’t see any human beings there, I just saw a computer-driven machine.”

And people wonder why the jobs have not returned as the economic recovery progresses — Friday’s jobs report included the fact that a record 93,770,000 Americans are not in the labor force while Wall Street is doing very well. The new machines are a big part of modern unemployment.

The expanding use of the 3D printers is yet another area where humans are being phased out of the manufacturing process as being unnecessary because machines are faster, cheaper and more accurate. Automation, robots and computerization are making humans obsolete in many jobs across the spectrum. In 2013, an Oxford University study (“The Future of Employment: How Susceptible Are Jobs to Computerisation?”) predicted that “about 47 percent of total US employment is at risk” to be replaced by robots and automation by 2033. The Gartner tech consulting firm has forecast that one-third of jobs will be done by smart machines by 2025, just ten years from now.

As a result of these rapid technological changes to the workplace, America does not need to import immigrant workers to do jobs deemed by some to be too unpleasant for citizens. Given the automation revolution, the appropriate number of immigrants is ZERO.

The World’s First 3D-Printed Car Is a Blast to Drive, Popular Mechanics, August 7, 2015

A little quality time behind the wheel of the Local Motors Strati roadster.

This spring Fiat Chrysler CEO Sergio Marchionne called out the auto industry for the staggering amount of money it wastes in the design and manufacture of cars. His solution is based on classic business principles: consolidate and eliminate redundancy. Local Motors CEO Jay Rogers perceives the same challenge, but he’s attacking it from a completely different direction. For Rogers, the problem stems not from business organization but from the fact that we still build cars the same way we did in 1915, on assembly lines with thousands of individual parts. It doesn’t have to be that way, and the proof is parked in his Knoxville, Tennessee, garage, charged up and ready for a drive.

Local’s answer to the cost-cutting question is the Strati, the first 3D-printed car. It’s a humble (albeit very cool-looking) thing. Built—printed—in Detroit, in collaboration with Oak Ridge National Laboratory in Tennessee, the Strati is a small electric two-seater, the first of many models in Local’s plans. Two factories, scaled to employ 100 people each, are under construction now and scheduled for completion by the end of the year. Local plans to build its own cars, but it could also end up working as a supplier for original-equipment manufacturers, some of whom have met with Rogers already. “One of them said, ‘This would be great for prototyping,’?” Rogers says. “And I said, ‘Forget prototyping! This is how you make the car.’?” That’s the radical big idea, the one that prompted Popular Mechanics to bestow a Breakthrough Award on Local Motors last year.

The world’s first 3D-printed car is crude by design, its dashboard looking like stacked silicone beads from a caulking gun. Its flanks, meanwhile, are smooth, resembling the exposed parts of the BMW i3’s matte carbon tub. “We milled the sides to show how that would look,” Rogers says. “Some of the other parts are just how they came out of the printer, so you can see that. But we can make it look however we want. You could put a vinyl wrap on it and the car would still be completely recyclable.”

The Strati is printed from carbon-fiber-reinforced plastic, a versatile, strong, and relatively cheap material that could enable some new approaches to safety. Thanks to the nature of 3D printing, where the car is built in layers squirted from the nozzles of a massive printer, you can embed energy-absorbing crash structures or superstrong seat-belt mounts that are anchored deep in the body. You could bond springy bumpers to cushion pedestrian impacts (right now Local is experimenting with a printable elastic polyurethane material called NinjaFlex). And if you managed to catastrophically damage the tub, you could unbolt the motor and suspension, melt the car down, and print a new one. Of course, the Strati parked in Knoxville doesn’t even have seat belts, but it’s proof of concept.

The prototype I drove is the third that Local has printed and took about 40 hours. The company is currently looking for an electric-powertrain supplier, so for now the Strati has a beefy golf-cart motor as a stand-in. The rear-wheel-drive Strati is envisioned as a city car, but Rogers isn’t blind to the performance possibilities. “If you put a motor with 150 or 200 horsepower in here, it would be a lot of fun,” he says.

It’s a lot of fun already. The rear suspension rides on an aluminum subframe, and with no distinction between body and chassis, the car feels inordinately solid, substantial. There’s some clunking from the stand-in motor, but the car itself is silent. Put a Mitsubishi i-MiEV motor back there and this thing would be a riot.

The last car I tested with a one-piece carbon tub was a McLaren 650S that cost more than $300,000. This Strati, lackluster motor notwithstanding, could cost about $5,000. No, it’s not a McLaren. But to the family of five that crams aboard a motorcycle to get around—Rogers recently witnessed exactly that on a trip to India—it might as well be.

Developing countries would love this technology for cheap transportation, but so might the rich guy who wants a thousand-horsepower car of his own design, printed in a production run of one. Or the carmaker that wants to churn out a complete car in ten hours rather than 24, using a fraction of the components. Modern cars are complicated, but the union of 3D printing and electric propulsion—where the motor has just one moving part—points to a future in which that’s no longer a given.