It’s rare to see the downside of automation featured on the front page of a mainstream publication, and Sunday’s Los Angeles Times gave the story a prominent spot just under the masthead: 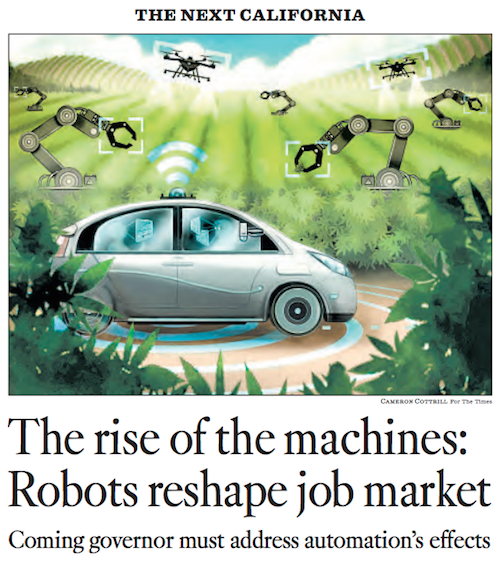 La Times chose to use a local focus rather than national, perhaps thinking that regional analysis might make it more real to readers. The next governor won’t be able to do much to fix technological job loss other than emphasizing more appropriate education: that way young people hopefully won’t be trained for jobs that machines will be doing in a few years.

And unlike the article, some of the commenters observe that continued immigration makes no sense for the automated future:

nealmaben — This is a very good article. Having said that, there is one very large omission, the flooding of California and the rest of the United States with legal and illegal immigrants. The fact of the matter is, we simply do not need any more people here, for the foreseeable future.

fissile48 — Automation? That’s why we need an infusion of millions of unskilled workers from Central America.

ToughEnough — More evidence why adding roughly 750,000 more poorly educated and untrained illegal aliens in the US every year to the 21,000,000+ already here along with 1,500,000 more legal immigrants makes no economic sense. If you accept it harms our overall economy (and society) going forward, then why?

These Times readers are aware of the job-killing nature of automation as predicted by tech experts. Oxford researchers forecast in 2013 that nearly half of American jobs were vulnerable to machine or software replacement within 20 years. Rice University computer scientist Moshe Vardi believes that in 30 years humans will become largely obsolete, and world joblessness will reach 50 percent. The Gartner tech advising company believes that one-third of jobs will be done by machines by 2025. The consultancy firm PwC published a report last year that forecast robots could take 38 percent of US jobs by 2030. Last November the McKinsey Global Institute reported that automation “could displace up to 800 million workers — 30 percent of the global workforce — by 2030.” Forrester Research estimates that robots and artificial intelligence could eliminate nearly 25 million jobs in the United States over the next decade, but it should create nearly 15 million positions, resulting in a loss of 10 million US jobs.

As usual, the liberal media can’t bring itself to say that automation makes immigration obsolete, but at least some of the people can see the big picture.

Millions of Californians’ jobs could be affected by automation — a scenario the next governor has to address, Los Angeles Times, October 14, 2018

Looking at a map of California on a projector screen, Johannes Moenius, an economics professor at the University of Redlands, hovered his mouse over the Inland Empire, which glowed with a splotch of red pixels.

The colored dots signified how susceptible an area would be to job losses caused by automation. And the alarm-bell red that covered Riverside, San Bernardino and Ontario signaled high risk — roughly 63% of tasks performed by workers in the area could be automated in the future.

To Moenius, the rise of robots in warehouses, factories and fast-food restaurants presents danger for places like the Inland Empire, where most residents work in logistics and the service industry and just 21% of adults have a four-year degree. As technology transforms the nature of work in California, how do people most at risk find their way to new jobs?

“We’re facing a major challenge,” Moenius said. “If we don’t do anything, then it will turn into an apocalypse.”

Whether confronting an increasingly automated labor market or grappling with how the gig economy is reshaping the relationship between companies and their workers, California’s next governor will have to address the changing nature of work.

That could mean rethinking how to educate Californians, remaking labor laws or considering major social safety net proposals such as a universal basic income. State government might not be able to control change sweeping the workplace, but it will have to deal with the fallout. (Continues)