It’s not that hard to imagine public acceptance of self-driving buses that poke around a simple route at a safe 12 mph, like the ones being tested in Greece. Also unthreatening is the little Google concept car designed with city driving in mind, shown above.

However, a self-driving big rig with no human in charge of a 80,000-pound loaded vehicle barreling along at highway speeds is another matter entirely.

Below, a self-driving truck made by Daimler was tested last year near the Hoover Dam in Nevada. 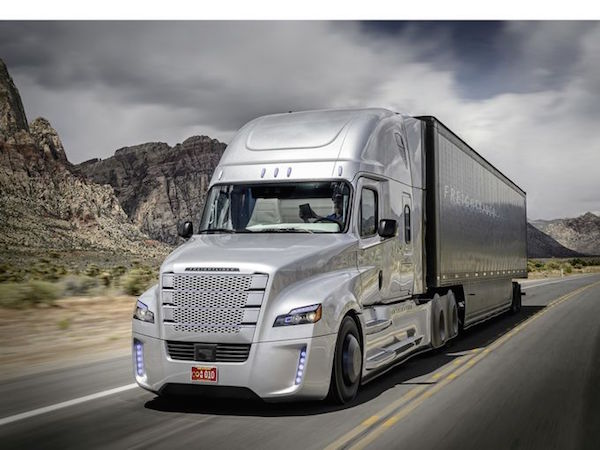 Still, the money to be saved by deleting drivers is catnip to business, and developers are focused on making the technology work. Otto, a start-up formed by former Google employees, is working on an add-on kit that will make an 18-wheeler self-driving. One of the developers, Lior Ron, recently discussed the project with Neil Cavuto:

The Wired article below is informative, and it assures us that even an autonomous big rig will have a human inside.

But will having a minder really help if a bad situation blows up quickly? In a circumstance where seconds matter, having a semi-engaged driver aboard may be the worst of all possible worlds. It’s somewhat reminiscent of the 2013 accident where an Asiana plane crashed on the seawall at the edge of the San Francisco Airport runway, killing three passengers. After the accident was analyzed, it was determined that the pilot wasn’t prepared to fly the plane manually during the emergency. Furthermore, a study from the FAA found that in general, pilots depend too much on automated flight systems, and many don’t have the skills to handle the plane by hand.

It’s not hard to imagine a similar future for big-rig truck drivers. Certainly the shipping companies would invest in the self-driving kits to save money, hoping to pay drivers less or get rid of some or all of them. One strategy would be platooning, where several undrivered trucks are linked electronically to the leader.

At any rate, the upshot is to save money by having fewer drivers to pay.

Keep in mind that automation in transportation as well as in many other job categories makes immigration an obsolete government program. If indeed half of US jobs are taken by smart machines in a couple decades, as Oxford researchers have forecast, American citizens will need those remaining jobs.

THE TRUCKING INDUSTRY is ready for revolution. Autonomous trucks aren’t as sexy as driverless cars, but they could have a bigger impact on our lives. Within years, they could make the roads safer, the air cleaner, and deliveries cheaper.

All of this is closer than you think. Last year, Daimler unveiled the world’s first autonomous semi. Volvo is working with Europe’s Project Sartre to develop road trains where a caravan of robo-trucks follows a leader.

The effort makes sense when you consider that trucks carry around 70 percent of the freight that transported across the US, and demand is growing. But shiny new trucks like the Daimler’s autonomous Freightliner will a long time to penetrate the market. Daimler says that won’t start happening until about 2025, meaning the 3.46 million big-rigs already on US roads aren’t getting any smarter anytime soon.

That’s why a new startup is developing a $30,000 kit that can make any truck built since 2013 autonomous. Otto, which comes out of hiding today, is led by Anthony Levandowski, who worked at Google on Streetview and mapping, and Lior Ron, who was the Google Maps Product Lead. They’re moving fast—the company launched in January and has about 40 employees nicked from Apple, Tesla, and Cruise, the autonomous startup GM recently bought for $1 billion.

Otto’s kit will allow trucks handle themselves on the highway, safely keeping within a lane, maintaining a set speed, and slowing or stopping as necessary. The company says it has demonstrated its technology on two vehicles on Interstate 5 and Highway 101 in California with minimal human intervention. Like Daimler’s rig, the trucks do not change lanes by themselves, they just slow down and caravan behind other slow movers (good news for anyone who’s been stuck behind one slow truck passing a slightly slower truck).

Otto says its trucks eventually should be able to operate without a driver at the wheel. Someone will still be aboard, but not necessarily at the wheel. Otto says it has conducted limited tests, where regulations allow it (you can see it in the video).

The potential benefits of this are enormous. According to a Federal Motor Carrier Safety Administration analysis, the driver was the key factor in 87 percent of big-rig crashes, poor decisions caused more than a third. Making the computer drive could get companies around strict rest rules for drivers, improving safety without sacrificing efficiency. “We felt an obligation to bring this technology to society sooner rather than later,” says Ron.

Retro-fitting trucks makes more sense than trying to give existing cars Knight Rider-inspired abilities. Otto’s $30,000 price estimate makes it highly unlikely anyone would adapt it to the family minivan. But the return on investment should come quickly on a $150,000 rig that drives hundreds of miles daily. The system only works on trucks built since 2013, when automated transmissions became widespread.

Otto’s “pack” includes extra cameras, radar, and LIDaR sensors, a common combination for advanced autonomous vehicles. To control the vehicle, Otto adds power steering and redundant braking systems. A custom computer is the brains of the operation, making real-time driving decisions. “What unlocks the capability of moving with no driver in the driver’s seat is the quality of the algorithms,” says Levandowski.

Otto’s kit also uses detailed mapping data. It’s a common move in this space—Google’s self-driving cars, for example, can’t go anywhere without extremely high-res maps in hand—but Otto uses them as a secondary information source. Mainly, that means deciding when it’s safe to pull over, if things go wrong, the computer needs to cede control, and the driver isn’t responding. A Tesla with Autopilot would slow down and stop, with its hazard lights blinking. A truck fitted with Otto’s tech could tell if it’s on a bridge with no shoulder and would know that it should keep going another 100 feet to a wider section of road to stop. Mapping the country’s 146,000 miles of typical truck routes may seem daunting, but it’s a tiny fraction of the four million miles of roads reaching through every town in the country.

Otto is building a third test rig now and plans to retrofit one truck per week for the next few months. If it can prove the tech works consistently, and convince truck operators the investment is worth it, autonomous big rigs will become much more common very quickly. Roads should safer, deliveries should easier, and with robots at the wheel, truck stops are going to become very different places.