Airline Pilot and Journalist Are Jobs Threatened by Smart Machines

In July 2013, an Asiana airliner from Korea smacked into the seawall at the edge of the San Francisco Airport runway on approach and crashed, killing three and injuring dozens. 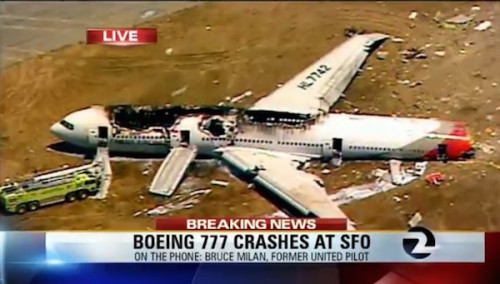 After the evidence was analyzed, one causal factor determined was that the pilot wasn’t prepared to fly the plane manually during the emergency. Furthermore, a 2013 study from the FAA found that in general, pilots depend too much on automated flight systems, and many don’t have the skill to handle the plane by hand.

The crash and tragic loss of life are reminders that the automation earthquake sweeping the industrialized world is not without its problems. How much longer will passenger planes be flown by humans anyway? We hear of self-driving cars and trucks in the works, but self-flying planes (aka drones) aren’t being discussed in public — yet.

Still, the job of airline pilot is no longer a recommended job choice, though it was thought very desirable until recently. It’s hard to keep up with jobs falling off the table these days.

Pilot and journalist are not big immigration categories for visas, still the general trend is toward systemic job loss across the skills spectrum caused by smart machines, and therefore immigrant workers are no longer needed in America given the economy of the future.

Most of us watched as automation displaced factory workers and other laborers; but now many “skilled” workers are getting anxious as the robot overlords come for us.

When automated factories started erasing jobs at manufacturing companies, most of us shrugged: Great, better products cheaper, was the general line of thinking.

But as automation keeps creeping up the stack, taking over more of what most would call “skilled” positions, well that’s getting some folks—who consider themselves skilled professionals—nervous.

Take airplane pilots for example. That’s now a dead-end job according to Mary “Missy” Cummings, director of the Humans and Autonomy Lab (HAL) at Duke University (and a former Naval fighter pilot.) She said that “in all honesty” she could not recommend that anyone become a commercial airline pilot going forward, given the current state of the art.

“Commercial pilots today touch the stick for three to seven minutes per flight—and that’s on a tough day,” she told an audience at the MIT CIO Symposium on Wednesday.

So, the gist: if you like to fly, make enough money in some other career so you can pursue it as a hobby. The broader problem, Cummings noted, is that humans tend to get jaded when they’re not doing useful things. And that is bad, even dangerous.

“Boredom sets in when you babysit automated systems and if you think this is a problem in aviation, just wait till driverless cars come around,” Cummings said.

Complacent people still have an expectation that if and when something goes wrong at the wheel or the joystick—which it will—a human will intervene at the right time. Which won’t happen, she said.

But it’s not just pilots and drivers who are endangered species. Journalists are also on the block. Automated Insights has programmed the creation of earnings stories and sports stories that show up in news papers around the world. The company’s computers churn out 3,000 earnings stories per quarter for the Associated Press at an average cost of less than $8 per story.

“The AP did 300 earnings stories per quarter, now they do 3,000,” said Robbie Allen, founder and CEO of the Durham, N.C.-based company, which was purchased in February by Stats.

Allen stressed, perhaps sensing reporters in the room, that his service augments rather than replaces, reporters’ work. Publications still want to cover Google and Apple earnings so maybe they’ll use Automated Insights story as a template, a starting point, and add their own expertise, he said.

The company’s goal is not to create one story for a million people but a million specialized stories for one person each —all driven by data. The ultimate goal is complete personalization. One of the company’s early projects was to take fantasy football data and to create personal stories based on that data for those stats-crazed team managers.

“I once asked how many reporters would be interested in writing a million fantasy football stories. And I got no takers,” he said.

Professor Tomaso Poggio of MIT’s Center of Biological and Computational Learning ranked people who are most at risk for professional obsolescence.

“The middle jobs will disappear,” he said.

So what should individual humans do to protect themselves from professional dead ends?

Unsurprisingly, all four panelist at this session, recommended programming skills. The thinking likely being that the robot cannot become your overlord if you’re the one programming the robot.

But getting back to the NPR story on Automated Insights: For what it’s worth, Horsley’s story was much better.