The tech industry has been successfully moving forward at deliberate speed to create self-driving cars, trucks and buses, but the administration thinks it can help by dumping in a major infusion of taxpayer cash. On Thursday, the Secretary of Transportation Anthony Foxx announced a plan increase government meddling in driverless vehicles to expedite the process:

FOXX: “We are on the cusp of a new era in automotive technology with enormous potential to save lives, reduce greenhouse gas emissions, and transform mobility for the American people. Today’s actions and those we will pursue in the coming months will provide the foundation and the path forward for manufacturers, state officials, and consumers to use new technologies and achieve their full safety potential.” (Gizmodo)

Certainly new rules of the road need to be worked out, along with safety and insurance considerations, but $4 billion is off the charts for what is needed.

The tech elites promote the argument that self-driving vehicles will be safer without dangerous humans at the wheel. Google driverless car pioneer Sergey Brin has long emphasized the safety aspect of his project.

Is Obama in a rush to unemploy still more millions of Americans? There are an estimated 3.5 million truck drivers in the U.S., from big-rig 18-wheelers to local delivery vans. In addition, the BLS counted 233,700 cab drivers in 2014. Also, some (many?) of the roadside truck stops offering food and services for human drivers will go out of business. 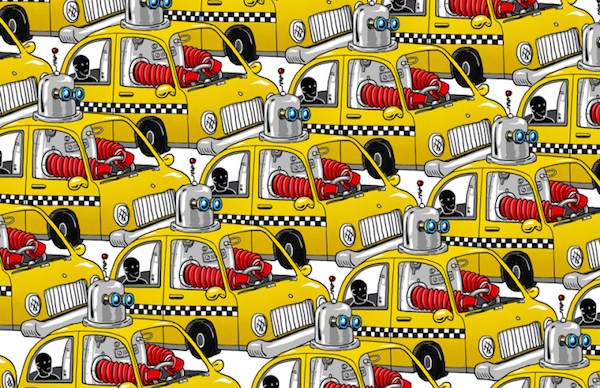 Hopefully, the problem of automotive hacking will be worked out before major implementation of robot transportation, so some jihadist Mohammed won’t be able to take remote control of a big rig weighing 80,000 pounds barreling down the highway.

The fantasy of being able to curl up in the back seat with a book won’t happen any time soon though. A driver will have to be present to handle any emergency that might come up.

But that arrangement has not worked well for airliners, which are now highly automated except for take-off and landing. When something goes wrong, modern pilots no longer have the skills to fly the plane, a reason cited for the 2013 Asiana crash in San Francisco that killed three. This week, it was reported that pilot over-reliance on automated controls in the cockpit had become a problem, and pilots need more training in manual flying.

By the same token, if the human “driver” has to be available for an emergency, then the person has to be paying attention to the road rather than daydreaming. Semi-automated driving seems dangerous rather than safer.

Keep in mind that automation experts say that a huge transformation of the jobs economy is underway, causing human workers to become obsolete in many occupations. Oxford researchers reported in 2013 that 47 percent of American jobs could be replaced by automation within 20 years. The Gartner tech consulting firm has forecast that one-third of jobs will be performed by smart machines in 2025, just 9 years from now.

So along with all the other complications of automation, the workplace transformation means America won’t be needing any more immigrant workers.

Driverless cars could be dominating U.S. roadways in years, not decades, thanks to a new push from federal regulators.

President Barack Obama is heading for the exits with a $4 billion push to get more driverless cars on the road, moving to mollify an increasingly hungry tech industry — but he will need Congress to loosen its purse strings first, not to mention potentially increase authority for the Department of Transportation’s highway safety agency.

The multibillion dollar program, announced Thursday, is the biggest push yet from the White House to integrate driverless cars into the transportation system and a landmark moment for an administration that has taken a go-slow approach to the issue. It’s also a watershed for NHTSA, a safety watchdog whose ability to keep up with technological changes in the automobile industry it oversees has been regularly critiqued.

The president’s fiscal 2017 budget, set to be released Feb. 9, will include a request for nearly $4 billion to implement driverless car pilot programs over the next decade, Transportation Secretary Anthony Foxx announced Thursday.

At Foxx’s announcement at the Detroit Auto Show, he called the push for billions in testing dollars “a huge step forward,” adding that “we are going to do everything we can to advance safe, smart and sustainable transportation innovations. We are bullish on automated vehicles.”

After years of taking a cautionary — some would say prohibitive — approach to the technology, the administration appears ready to embrace what automakers and the tech industry have long seen as inevitable: a world where self-driving cars are the norm, not the outlier.

In addition to the new testing programs, Foxx also unveiled ambitious federal guidelines that he says will get self-driving on the roads quicker — and more safely — than ever thought possible.

“Today’s actions and those we will pursue in the coming months will provide the foundation and the path forward for manufacturers, state officials and consumers to use new technologies and achieve their full safety potential” he said.

The new guidance document, which updates provisional policies released in 2013, promises NHTSA will propose safe operating practices to the industry within six months. It also promises a “nationally consistent approach” — but with a cautionary tale, saying NHTSA’s authorities may need an update as the industry looks for ways to innovate.

“It is becoming clear that existing NHTSA authority is likely insufficient to meet the needs of the time and reap the full safety benefits of automation technology,” the document reads.

“I don’t believe this conversation is really just about the next six months” Foxx said, adding that this is the beginning, not the “final chapter” for a government-industry tag team on driverless cars. John Krafcik, CEO of Google’s self-driving car program, NHTSA’s Mark Rosekind and leaders from several major automakers, including GM and Tesla were also on hand for the announcement.

Foxx’s open-arms embrace of the driverless technology is a significant attitude shift for a department that just three years ago recommended states only green-light self-driving cars for testing.

It isn’t just automakers who stand to gain from the feds easing the brakes on driverless car policies. Tech giant Google has spent years researching and developing its own self-driving technology, and more recently, Uber and Lyft have made significant investments aimed at putting their own driverless cars on the road.

It’s not every day that the private sector clamors for more government regulation. But automakers and tech leaders like Google contend that the government has an important and necessary role to play if autonomous cars are ever going to make it to the mainstream market.

Chris Urmson, director of Google’s self driving car program, issued a rallying cry for a stronger government-industry partnership on the issue during a speech Wednesday. “We can’t just leave it to the private sector,” Urmson said, adding that regulators must play a role in helping bridge the gap “from research to the road.”

“I think what you’re sensing from me is a belief that if done well, we will set the ground rules for the next 20 or 30 years in transportation by figuring out as early as we can how best to integrate this technology into our roadways” he said at the time.

Now, NHTSA will seek input from automakers and others as the auto agency tries to wrap its arms around the deployment and operation of fully self-driving cars.

In addition, the agency plans to team up with state partners and the American Association of Motor Vehicle Administrators to develop a model driverless car policy states can implement, hopefully laying the groundwork for a consistent national policy.

“If we leave it up to state governments to do a patchwork of regulations, then they’re dealing with a very challenging regulatory environment,” Lewis said.

“There is an inherent federal role in a lot of aspects of autonomous vehicles — safety, security, privacy,” he added.

And while DOT doesn’t plan to initiate any new autonomous car rulemakings in the short term, Foxx said he wants to ease some of the regulatory restraints to make it easier for the technology to develop.

“I think the federal regulations and policies surrounding autonomous vehicles are important not only to make sure there’s consistency and a smooth rollout but also to make sure the consumer is protected in certain instances” Eno’s Lewis said.

Though the pace of driverless cars has picked up — Google has tested more than 1.3 million miles of road without a driver behind the wheel, Uber wooed away a team of Carnegie Mellon researchers to create its own self-driving technology and GM invested millions in Lyft to study automation — fully driverless cars are still years away.

“The fact of the matter is, we aren’t really sure what autonomous vehicles are going to be capable of, when they’re actually going to be marketable and accessible to the general public and what they’re going to actually mean for transportation,” Lewis said.

“It’s always been a dream of the industry and technologists to have a car that can do the function that humans have long held, which is driving it. It’s really kind of only been the last couple of years where people have realized were at a point that this could happen, and happen anywhere, and respond to any environment.”