Is the New York Times having a teeny tiny shift in opinion about the wonderfulness of Islamic foreigners? Thursday’s front page included an interesting juxtaposition: the photo shows a protest of the Cologne sex attacks by aliens against European women with a sign reading “Rapefugees Not Welcome” while the caption referred to the “far-right group Pegida” sponsoring the demonstration.

The Times better be careful or people will start to think “far-right” is the sensible, non-misogynist position.

The online posting of the article included a video from Reuters with an interesting quote from a greying man named Olaf Spermer who appeared middle class and not an extremist at all: 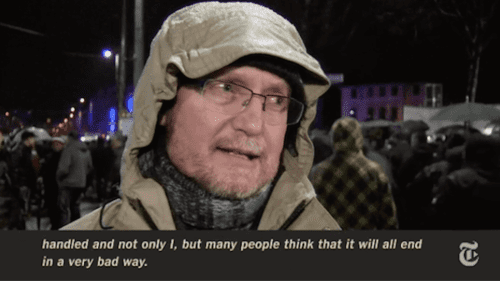 “Especially what annoyed us in the past weeks and months, was the whole situation regarding foreigners, that how things were handled and not only I, but many people, think that it will all end in a very bad way.”

The newspaper text, however, wrings its liberal hands over self-defense militias and alleged right-wing violence against foreigners. It misses the central issue: when immigration threatens public safety and national security, it is wrong and must stop. ISIS declared its intention to insert jihadists into the illegal alien hordes, so it is naive to think otherwise.

In centuries past, Europe had defenders like Charles Martel who defeated the Muslims at Tours in 732. Today’s political leaders act on their liberal desires about how people should behave rather than the reality in front of them.

ROME — In Finland, militia groups are patrolling small towns housing asylum seekers in the name of protecting white Finnish women. In Germany, far-right protesters rampaged through Leipzig on Monday, vandalizing buildings in an “anti-Islamization” demonstration. In Italy on Tuesday, an anti-immigration regional government approved the text of a law making it difficult to construct new mosques as Muslim refugees are settled in the area.

Across Europe, the migrant crisis that has engulfed the Continent since the summer is provoking new levels of public anxiety after the New Year’s Eve sexual assaults in Cologne, Germany, where witnesses and the police described predatory gangs of mostly foreign men, including some refugees, groping and robbing young women. The Cologne police are also investigating allegations of rape.

While the police say the assaults in Cologne were carried out by hundreds of men, even that is a narrow sliver of the more than one million asylum seekers who entered Europe last year. Still, the anxieties provoked by the Cologne attacks quickly spread as reports emerged of similar New Year’s Eve assaults in other German cities, as well as in Finland and Austria.

While the details in some of those reports are sketchy, and none approach what happened in Cologne, they have touched an exceptionally raw nerve as European societies face the challenge of integrating and acculturating the asylum seekers, most of them Muslims, and a majority of those single men.

Far-right political parties, which have long invoked hoary stereotypes of dark-skinned foreigners threatening European identity and security, have pounced on the reports, having already capitalized on the inability of the European Union to secure its external borders while efficiently managing the movement of migrants inside the bloc.

“This has been the elephant in the room that no one is prepared to acknowledge — that the great fear is the fear of Islam,” said Alexander Betts, director of the Refugee Studies Center at Oxford. He argued that most mainstream politicians had failed to directly address these public fears or to provide enough clarity in the migration debate, creating a vacuum that anti-immigrant leaders have rushed to fill.

Mr. Betts warned that unless political leaders could quickly articulate a nuanced argument for migration — one that confronts fears about security and religious differences, especially in the aftermath of the Nov. 13 terrorist attacks in Paris — public support for granting asylum to refugees could collapse. “To have attacks in Germany that are of a sexual nature perpetuated by men ostensibly of Muslim origin is symbolically devastating for a public commitment to asylum,” he said.

The public mood has been shifting for weeks and is already influencing policy. European news outlets reported on Tuesday that since Jan. 1, Germany had tightened screening of migrants trying to enter the country from Austria. Many other European countries erected fences or border checkpoints last year to block or divert the flow of migrants — moves that threatened to destroy Europe’s system of open internal borders. In Denmark, the government is even moving to confiscate valuables from arriving migrants to defray the cost of accommodating them.

Chancellor Angela Merkel of Germany has been Europe’s most outspoken advocate of accepting refugees, emphasizing the humanitarian and moral imperative of doing so while seeking to rally ordinary Germans with her slogan, “We Can Do It!” But Germany is bearing the brunt of the new arrivals, and critics have accused Ms. Merkel of failing to clearly articulate a plan for an integration process that is likely to last many years.

“It seems as though the time has come for a broad debate over Germany’s future — and Merkel’s mantra of ‘We Can Do It’ is no longer enough to suppress it,” wrote Der Spiegel, the German newsmagazine, which described the police’s failure to stop the assaults in Cologne as “symbolic of the state’s powerlessness in the face of chaos and crime.”

At the same time, polls show that far-right parties are gaining support in France, Germany and elsewhere.

In Austria, Herbert Kickl, general secretary of the right-wing Freedom Party, has called for an immediate halt to new asylum applications, while other party members have called for closing Austria’s borders in the aftermath of the Cologne attacks. Many Austrians who are very wary of the Freedom Party’s agenda concede that the influx of refugees has stirred an undercurrent of fear, even though the country has seen little violence.

“There’s a split in society — in our editorial office, at the lunch table, in circles of friends,” said Florian Klenk, editor in chief of Falter, a left-leaning weekly based in Vienna. “It is a polarization, but we have little violence.”

Even so, Peter Hacker, Vienna’s appointed refugee coordinator, said the city had developed strategies to coordinate waves of migrants last September. “We decided then that we’d have a maximum visible presence of police in the places, like train stations, where migrants were,” he said.

Mr. Hacker added: “Here in Vienna, we have a clear political stance on refugees and migrants. Vienna has understood for decades that migrants are to be helped.”

Many analysts note that the Cologne assaults are especially damaging because anti-immigration critics and right-wing extremists are using them to discredit all migrants as criminals or hooligans, even though the overwhelming majority of migrants, many of them refugees fleeing war in Syria, are peaceful and law-abiding.

But fine distinctions have been blurred amid a climate of anxiety and insecurity in Europe that has widened divisions in politics, the news media and society alike.

In Finland, the Helsinki Police Department issued a statement on Jan. 7 claiming it had prevented a group of young Iraqi refugees from molesting women on New Year’s Eve — an announcement that startled many Finns. But other witnesses, as well as an official at Finland’s National Bureau of Investigation, later discounted any suggestion of similarities to the Cologne attacks.

Yet already, Finnish militia groups, including one called the Soldiers of Odin, are patrolling towns in the name of protecting women. Many of these groups have ties to far-right organizations, and their presence has become a major political issue.

Opposition politicians have criticized the reluctance of Finland’s right-wing government to condemn the militia patrols. The country’s justice minister, Jari Lindstrom, a member of the populist, anti-immigration Finns party, caused a furor when he said the patrols did not worry him.

Europe already endured a tumultuous 2015 that included the migrant crisis, the Greek debt crisis and two waves of terrorist attacks in Paris. For the European Union, no crisis has been more threatening than the influx of refugees, which has turned nation against nation and exposed the institutional shortcomings of the union’s structure to address questions like external and internal security. Many analysts say the Cologne attacks have only intensified the pressure for drastic reforms to the European Union system.

Reporting was contributed by Kimiko de Freytas-Tamura from London, Gaia Pianigiani from Rome, Kimberly Bradley from Vienna, and Richard Orange from Malmo, Sweden.